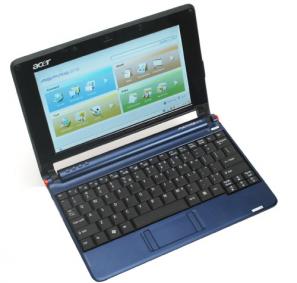 Premier laptop maker Acer joins the party with its own entry into the burdgeoning mini-notebook market. Billed as one of the first of the Intel Atom-powered machines, it could set the benchmark for all that follow for the rest of the year.

Branded as part of the Aspire range, on paper it looks good, but how is it in reality…

Newly packing an Intel Atom processor is Acer’s Aspire One mini note – due to launch in the UK next month.

Like its fellow travel-sized portables, there are Linux and Windows versions on offer. The Linux flavour is set to retail for as little as £199, but £299 for Windows XP.

Acer is promoting Linux Lite for its fast-booting and shut-down capabilities, as well as its “simple, intuitive Linux interface” and underlying “virus-safe and super-responsive Linux environment.” The easy Linpus Lite Desktop  interface is Acer’s equivalent of the Asus Xandros desktop and separates functions into Connect, Works, Fun, and Files.

Pre-installed applications include OpenOffice 2.3 and an email manager that can (allegedly) manage up to six email accounts with a single interface. The Aspire One also ships with an Instant Messaging application that provides simultaneous access to Skype, Microsoft Messenger, and other IM services, and which can be used with the webcam, enabling video chats and video conferences. The Windows version offers Acer eRecovery Management, Acer Launch Manager, Adobe Reader, McAfee Internet Security Suite, and a Microsoft Office Trial 2007 package.

Acer also appears to be pushing the boat out on colour – with four shades on offer including a vibrant blue (though there is still a white one – as pictured – if you prefer).

Also see our reviews of the new generation sub-notebooks:

One thought on “Review: Acer Aspire One mini-notebook (Re-post)”