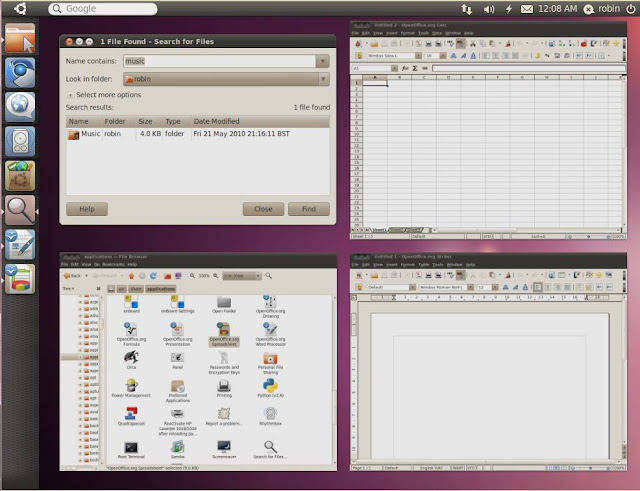 Watching Mark Shuttleworth’s keynote from UDS earlier, my interest was piqued by the new Unity interface due out with Ubuntu Light.

This is the stripped-down, space-saving vertical application launcher intended to accompany Ubuntu Light, the fast-boot version of Ubuntu for OEM’s. Light is being promoted as an OEM pre-install, an instant-on, login-to-desktop in 7-seconds session manager. 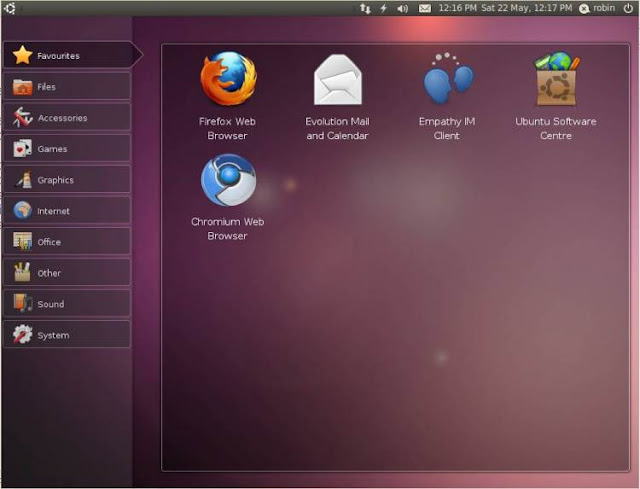 Then I realised I hadn’t much idea of the difference between Unity and the standard launcher of Ubuntu Netbook Remix (UNR), now more commonly referred to as Ubuntu Netbook Edition (UNE) so I wasn’t ready to judge the idea.

Only one thing to do: download of UNR and a fresh VirtualBox virtual machine at the ready…

Despite not having a netbook (the Celeron-powered JVC-mini doesn’t count and anyway, it’s my standby desktop-replacement with Lucid bang up to date). UNR installed into a clean VM very quickly with no fuss and within minutes I was looking at the UNR desktop.

Bear in mind this is optimised for small screens with limited real estate (pixels – typically 1024 wide by 900 or even 600 vertical) and follows on from other netbook interfaces such as Sugar (OLPC) and Linpus Linux Light (Asus). What you get is a very attractive and colourful desktop launcher with a handful of vertical menu options opening into a single navigation pane of enlarged application icons. This underlays the whole desktop session. The top gnome-panel is much stripped-back to the essentials. Running applications fill the screen by default, but with no titlebar

I like it. I’ve got access to everything I need  (which is everything in a standard Ubuntu-gnome-distro).

I then added the Unity ppa in order to install the Unitylauncher, which dropped right in with no apparent problems.
The development team’s instructions are straightforward:
sudo add-apt-repository ppa:canonical-dx-team/une
sudo apt-get update && sudo apt-get install unity

which adds and installs.

Caution: this is still an early ALPHA release, incomplete and likely to break somewhere. It runs on Mutter so do NOT try to pretty-it-up with Compiz – competing compositing managers don’t play nice. Also watch out if you’re running Gnome-shell already as that version of Mutter conflicts with the one installed with Gnome-Shell.

First problem (and I’ve now done this three times in different Lucid instances) is that Unity doesn’t come up as a session choice in GDM. It should. It does for everyone else. Not for me. Instead I edited /etc/gdm/custom.conf and specified the default session manually.

I then restarted UNR with a Unity interface, which consists of a single vertical column of enlarged icons: no text, but a descriptive text bubble when you mouse-hover. It is very efficient in its use of on-screen real-estate, which fulfils the first part of the brief. You can no longer add/remove applets from the top panel, it is locked. Instead you get the Google search bar at the top panel. When you perform a search, it will launch the default web-browser and show the search result.

Yes, it works, after a fashion. On one instance on Lubuntu, Unity started pre-populated with a handful of icons. On the UNR VM and another attempt on plain-vanilla Lucid, it came up blank and I had to add my icons manually. My quick route was to run Nautilus via the alt-f2 run box. I could then get to /usr/share/applications in order to run the rest. This is the default folder view that Unity should use for the default ‘Applications’ launcher (if it would only hang onto mine) but this is a poor choice as this is a folder full of symlinks in Nautilus with no filtering or categories – much like Gnome-shell. This is a quick-and-dirty solution to a fundamental problem and it sucks! QED.

The Unity toolbar/panel/launcher serves as both application launcher and a taskbar. I’m not going to mention the Mac-OSX dock. Any running application appears in the Unity panel with a (small) white arrow beside it; the foreground application has arrows both sides the icon.

To keep applications in the launcher, you have to right-click the icon and select ‘keep in launcher. Only you have to have some way to find and run the application in the first place!. Catch-22. Ok, it’s not difficult for a hack like me, but not at all intuitive for beginners.

The Ubuntu icon top-left of the screen is your task-switcher; click it, you get a ‘zoomed-out’ view with all running applications tiled in thumbnail view so you can select one to foreground.

To re-order the icons, you have to drag one off the Unity panel into the workspace then drag it back onto the panel in the position you want; the other icons re-arrange around it then you can release the mouse button. Again, it’s not difficult, but not so intuitive for beginners either. This old dog is used to trial-and-error with new interfaces.

Win some, lose some
One problem is that many websites (and applications) assume a screen-width of 1024pixels. Since you can’t hide the Unity launcher, you only get about 974 pixels in (not quite) full-screen mode. windows in Unity have titlebars once more, which reduces the vertical pixel count. It doesn’t support multiple workspaces either, everything sits in one glorious stack on one desktop.

Apparently you’ll be able to fill the Unity launcher and scroll up and down for programs. I have yet to see this work, so the jury’s out. Filling it may be easy to do as each running instance of Nautilus, for example, created another icon in the launcher. Since you have to mouse-hover to get a title for each instance, this could be come a royal pain in the butt. Although it’s not supposed to handle multiple instances of the same application – but mine does (??!!).

BTW, don’t leave any files on your desktop, Unity thinks it’s obsolete and the only way you can get to it is by navigating to the Desktop folder in Nautilus.

Report Card
So far, that’s about all Unity does. It fills the brief, does the one job and doesn’t crash. The current version is not very quick, but that’s a combination of low memory in the virtul machine with Alpha-release code not yet optimised (atop a development version of Mutter). There’s a host of other features slated for later releases, so Unity shows promise.

It will be very fast for the instant-on target-market, but given a choice, I’d go with the UNR launcher as an attractive working environment for everyday use.  RC

Robin Catling gained degrees in both arts and technology which led to a diverse portfolio of employment. A freelance systems analyst, project manager and business change manager for the likes of American Express, British Airways and IBM, he moved on to web design, journalism and technical authoring. He has also worked in film and television, both behind and in front of the camera, including productions by Steven Spielberg, Martin Scorcese, Ron Howard and Ridley Scott. A qualified three-weapon coach, he runs West Devon Swords teaching sports fencing to all age groups, and in recent years qualified with the British Federation of Historical Swordplay to teach medieval and renaissance combat in the Historical Western Martial Arts.
View all posts by Robin Catling »
« Facebook ‘Privacy’ Coerces Public Lemmings
Review: Simple Scan »