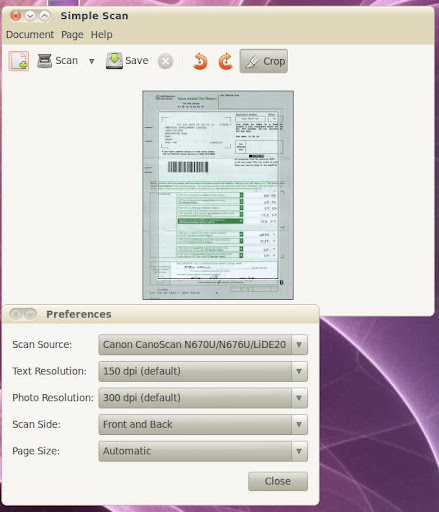 Ubuntu Lucid 10.04 and all its derivatives now come ready-equipped with a useful little application called Simple Scan.Position it in your mind as F-Spot is to Gimp, so Simple Scan is to X-sane. This is the one-window, simplified scanning interface you’ve been waiting for.

If you have even a moderately recent scanner this should work off the bat for you.

The main window is sparsely populated with New, Scan, Save, Stop, Rotate clockwise or anti- and Crop. An a scan preview. That’s it.

Robin Catling gained degrees in both arts and technology which led to a diverse portfolio of employment. A freelance systems analyst, project manager and business change manager for the likes of American Express, British Airways and IBM, he moved on to web design, journalism and technical authoring. He has also worked in film and television, both behind and in front of the camera, including productions by Steven Spielberg, Martin Scorcese, Ron Howard and Ridley Scott. A qualified three-weapon coach, he runs West Devon Swords teaching sports fencing to all age groups, and in recent years qualified with the British Federation of Historical Swordplay to teach medieval and renaissance combat in the Historical Western Martial Arts.
View all posts by Robin Catling »
« Review: Ubuntu Netbook Launcher versus Unity
How-to: Setup Google Analytics »