Review: Frankenstein at the National Theatre

Danny Boyle (Slumdog Millionaire and 127 Hours) directs Benedict Cumberbatch and Jonny Lee Miller who alternate in the roles of Victor Frankenstein and The Creature on different nights. Mary Shelley’s gothic horror, first published in 1818 is in safe hands.

Colluding with a work colleague whos saw Miller’s creature while I saw Cumberbatch in the role, we’ll try to give a sense of the four interpretations in this single production.

The play opens with a birth scene, in which the naked creature flops onto the Olivier stage from a giant man-made womb and spends several minutes writhing and flapping about like an epileptic trout out of water. Astonishing, dramatic, shocking – and a bit too long.

We settled on Jonny Lee Miller as the better Creature and Cumberbatch as the better Doctor, the one for his physicality and child-like vulnerability, the other for his innate intellect and moral wavering. Where Cumberbatch does malevolence and arrogance in both roles, much more agile and powerful, Miller achieves a more grounded, real quality on both sides, so it’s up to you to take your choice which way around you see them. But do see them, whatever.

The plot unfolds like a Greek tragedy, we can see the descruction of innocence from the beginning, even as Miller’s Creature lurches through his new world of discoveries like a curious toddler, full of innocent joy.

It’s all very Freudian in the way that the parent screws up the child, Frankenstein’s revulsion with his creation doing the damage in the first moments of rejection. Then the harsh world moves in to complete the job, Creature becoming ‘monster’ as reflected by those around him, then man, as he learns to lie and kill.

There is touching intimacy and horror.

As always, the best scene are those between the Creature and Frankenstein, there just aren’t enough of them.

The play is written heavily in favour of the Creature, so neither Frankenstein really gets to equal it with the material available. Cumberbatch comes closest, described as “hubris personified”; his ego, pride, rage, distress and grief playing along the arc of Oedipus Rex.

If anything falls below the ambition of the whole, it is the script; there’s some dud dialogue and some plodding scenes, but at a touch under two hours, it is remarkably faithful to the source.

The play is immaculately staged and directed by Boyle, as you;d expect. It’s a minor gripe, and I know we’re all supposed to be colour-blind these days, but you really have to make a leap away from nineteenth-centruy middle Europe before Frankenstein’s Afro-Caribbean wife and father-in-law make any casting sense. Credit to Naomie Harris as the moral compass, in response to Frankenstein’s confessions to his God-complex, simply asking “why?” SC 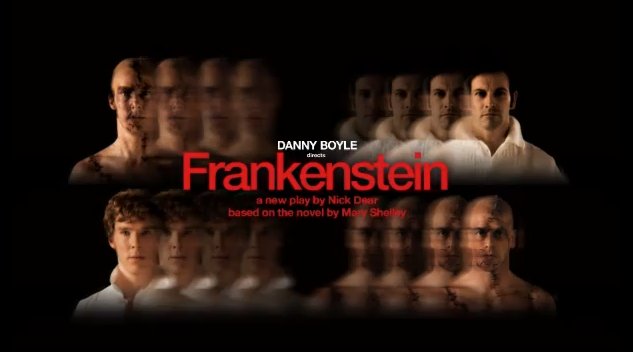 Sue Corsten is a film and TV make-up artist based in the UK.
View all posts by Sue Corsten »
« Windows 7 Version Hell
Dell Inspiron Mini 1011 Netbook »