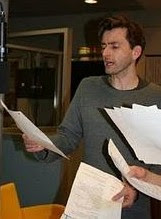 Two years on, I still find it difficult to get past David Tennant as Dr Who. In this Radio 3 drama, he stars as playwright Franz Kafka, living on the breadline in Weimar Germany, already terminally ill, full of regret for a life unfulfilled and a lost love. Except Tennant doesn’t do conventional, the twist is this is a dream-fantasy, with Kafka woken by his father to be told a local impresario has bought the rights to stage a musical version of his life – with Kafka himself as the star…

Murray Gold, composer of many TV sound-tracks (including Dr Who), displays a finesse for dialog, structure and pace. To apply the term “Kafka-esque” would be a cliché, but Gold writes the scenes with appropriate menace, discomfort and alienation. Scenes twist and turn in tone, sinister agents appear levelling charges in connection with crimes not yet committed, and everyone seems to know much more than the protagonist.
The dream setting provides the framework to distort time and location. Adding the excellently-done Kurt Weill-style musical in the last half-hour lifted the drama to a new level of surrealism.

Ably supported by a strong cast, Tennant turns in a poignant, achingly alienated performance as the consumptive, socially inept Kafka, emotionally and physically paralysed and led along by events. Reminiscent of his BBC Hamlet, Tennant does his usual turn of stutters, anxiety and manic intensity, clearly trying to underplay the role. But he’s such a strong personality that at times he overwhelms the drama. It’s had mixed reviews. I found it engaging and entertaining, although I may appreciate the source materials and dramatic forms more than some listeners. RC

You may also find a copy of the audio files on other sites.

Robin Catling gained degrees in both arts and technology which led to a diverse portfolio of employment. A freelance systems analyst, project manager and business change manager for the likes of American Express, British Airways and IBM, he moved on to web design, journalism and technical authoring. He has also worked in film and television, both behind and in front of the camera, including productions by Steven Spielberg, Martin Scorcese, Ron Howard and Ridley Scott. A qualified three-weapon coach, he runs West Devon Swords teaching sports fencing to all age groups, and in recent years qualified with the British Federation of Historical Swordplay to teach medieval and renaissance combat in the Historical Western Martial Arts.
View all posts by Robin Catling »
« Review: Windows Live Online Photos
Beginners Guide to WordPress »

One thought on “Review: Kafka the Musical BBC Radio3”