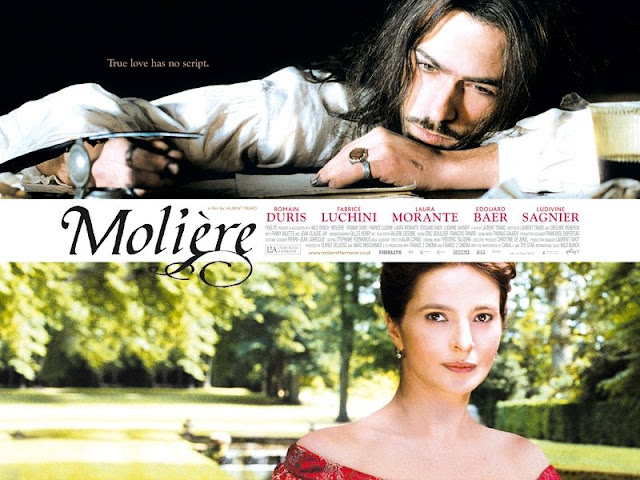 Jean-Baptiste Poquelin, pen-name ‘Molière’ wrote more than 30 plays and is considered in France to be a greater playwright than Shakespeare. This costume tragi-comedy, co-written and directed by Laurent Tirard begs comparison with Shakespeare in Love.

In 1644, Molière was bankrupted and went missing for several months. Tirard fills those months with a fictional account almost entirely based on Molière’s most famous play, Tartouffe, in which a louche con-artist inveigles his way into the household of a nobleman disguised as a priest…

This is not a sturdy bio-pic, but an imaginary excursion into the formative years of the young writer. Using scenes and dialog from Molière, Tirard zig-zags between homage, pastiche, rom-com, tragedy, comedy of manners, period glitz, farce and psychological character study.

In it, Molière is bailed from debtors’ prison by a nouveaux-riche, dilettante merchant, Jourdain. Hired as acting coach so the merchant may go charm a rich, aristocratic young widow, Molière is sequestered at the Jourdain chateau disguised as a priest called… M. Tartouffe. Molière is immediately enamoured of Jourdain’s neglected wife, Elmire, which is the core of the film. So very French. It is she who steers the hapless (and hopeless) tragedian Molière to invent his own particular brand of satirical tragi-comedy, his master-works to come.

Fabrice Luchini cuts a delightfully ludicrous figure as the deluded Jourdain (although I still think of him as the villain Gonzago from Le Bossu), at his finest in drag, exposing the hypocracy of the widow Celimene’s Salon. Edouard Baer is a delightfully impoverished and corrupt aristocrat of the ancien regime. Here are the stock characters Molière would satirise in his later plays.

The movie was well received in France by literature teachers, enthused by a revival of interest in one of France’s most studied authors, but panned by history teachers who rejected the speculative fiction that could be taken for fact by their students. Tirard trusts the audience to be more intelligent. That trust may be misplaced and Molière scholars should probably stay away.

Although some reviews attacked the movie for being dull, over-long, literal-minded and sentimental, this is a sparkling, frothy and engaging romp with an infectious sense of fun that lingers. It’s full of excellent performances and is a visual treat in every frame. RC

Robin Catling gained degrees in both arts and technology which led to a diverse portfolio of employment. A freelance systems analyst, project manager and business change manager for the likes of American Express, British Airways and IBM, he moved on to web design, journalism and technical authoring. He has also worked in film and television, both behind and in front of the camera, including productions by Steven Spielberg, Martin Scorcese, Ron Howard and Ridley Scott. A qualified three-weapon coach, he runs West Devon Swords teaching sports fencing to all age groups, and in recent years qualified with the British Federation of Historical Swordplay to teach medieval and renaissance combat in the Historical Western Martial Arts.
View all posts by Robin Catling »
« How-to: Edit Windows Boot Menu
How-to: Windows 7 Menu Entries – Old-school »