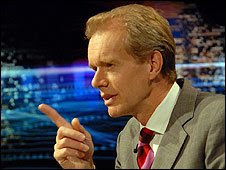 I like the general standard of BBC journalism. Impartiality is built into the BBC Charter and enforced by Parliament. Legendary presenters through the decades have included Richard Dimbleby and Robin Day, asking tough questions and pursuing real answers.

HARDtalk (the BBC’s capitalisation, not mine) is the one-to-one long-form interview show with public figures. Recent guests have included Bill Gates, Nadine Gordimer and Bernard-Henri Levy…

Current presenter Stephen Sackur is a long-time BBC foreign correspondent used to taking in politicians from US Presidents down. There are fewer politicians on HARDtalk, in favour of intellectuals, writers, activists, business people and heads of public bodies.

The trouble is that Sackur takes the HARD in HARDalk so literally, he treats them all like party-hack cabinet ministers fiddling their expenses. It’s a shame that such an accomplished correspondent so relentlessly pursues a hectoring style of interview. Has the BBC written it into his contract that he is the chief attack dog, or is there an undercurrent of machismo that he has to out-macho BBC1’s Jeremy Paxman?

The two latest examples on the World Service repeat give me concern.

Sackur repeatedly asks the ICC’s Chief Executive, Haroon Lorgat, whether it’s time for the ICC to take stronger measures against corruption in the international game (in particular Pakistan). The second thread is India; ‘the big-money short-form 20-20 Premier League has too much influence over the international game and is ruining cricket.’ You’ll notice that isn’t a question. That’s pretty much how Sackur phrases it over the eight or nine times he puts it to Lorgat. The man is the ICC cheif exec. It’s a politicial job like few others in sport and there’s no way Lorgat is going to give anything than a diplomatic answer. You’d think after the fourth time, Sackur would stop wasting airtime and move on to something else? We got the point. Other than alienating your interviewee and boring the listener, you’re not achieving any more.

On Friday, pro-Asia ‘maverick’ investor Jim Rogers is barely able to get a word in as Sackur badgers Rogers over China’s economic problems, even after Rogers concedes a list of issues and how he plans to mitigate them. I had to switch off. Day, Dimbleby, Frost, this isn’t.

Sorry, Stephen. Talk hard (sorry, ‘HARD’), but can we have more of the guests talking and less of you repeating the same questions? RC