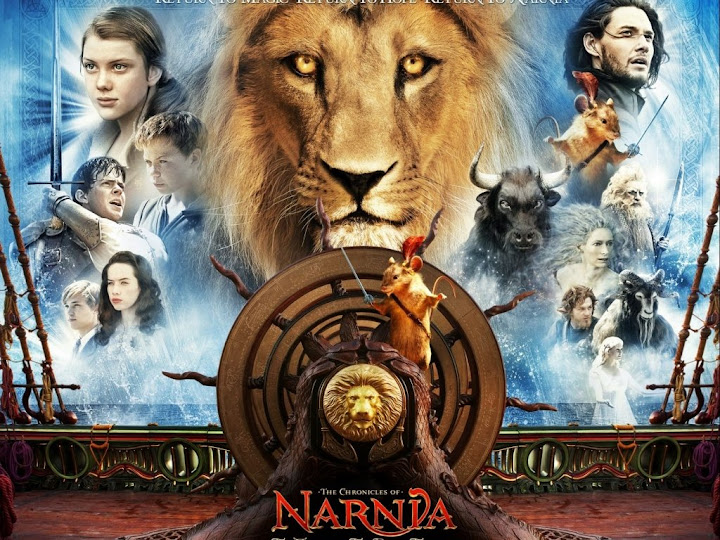 Two of the original Pevensey children are summoned back to Narnia with their obnoxious cousin Eustace. Reunited with Prince Caspian and the mouse Reepicheep aboard the majestic Dawn Treader, we are treated to an Odyssey across oceans, encountering mermaids, dwarves, pirates and a dragon.

I picked out the twin themes of temptation and responsibility, although you might be more attracted to sword fights, flying sequences and ropey retro-fitted cod-3-D…

Success rests with the kids. Lucy, Edmund and Eustace aid Caspian on an island-hopping quest to rid the land of a curse emanating from the ‘Dark Isle’, whisked along from set-piece to set-piece like i. Each has to  learn the folly of temptation – the boys for treasure, Lucy for coveting the attention given her prettier older sister. Everybody has to learn to be ‘who they are’ and take responsibility for their own actions.

Reepicheep has mutated into Hollywood’s current favourite Brit Simon Pegg, but not so you’d notice). Georgie Henley has genuine presence as Lucy, while Ben Barnes has matured into his role as Caspian through other work in the interim. True acting honours go to Will Poulter (Son of Rambo) as curmudgeonly cousin Eustace, a fine comic turn with pathos.

‘Dawn Treader was picked up by Fox after Disney dropped the franchise. The first two films took nearly $1.2 billion worldwide and still Disney failed to make enough profit. The evangelical Christians failed to turn up in their droves, partly because Disney toned down Lewis’ overt Christian sub-text for the worldwide audience. ‘Dawn Treader practically buries it, so by the time Liam Neeson’s gravely voice spouts homilies from Aslan’s mouth, I doubt many of the child audience have a clue what he’s talking about. Do they know Reepicheep is paddling away to die? And how is that a good thing?

Michael Apted (The World Is Not Enough) fills in C.S. Lewis’ boys-own adventure plot with action and incident, his reputation justified. It’s a handsome looking film, confidence and bravado intact. Just skip the retro-fitted 3-D if you can. The climactic battle with a giant sea-centipede-thing is a big action set-piece that goes on too long, but it is the epilogue with the long-awaited appearance of Aslan the lion that kills the thing stone dead.

The Voyage of the Dawn Treader ultimately does what is sells on the poster; the kids get an adventure, good triumphs, evil is banished, order is restored and Fox recoups its investment. RC

Robin Catling gained degrees in both arts and technology which led to a diverse portfolio of employment. A freelance systems analyst, project manager and business change manager for the likes of American Express, British Airways and IBM, he moved on to web design, journalism and technical authoring. He has also worked in film and television, both behind and in front of the camera, including productions by Steven Spielberg, Martin Scorcese, Ron Howard and Ridley Scott. A qualified three-weapon coach, he runs West Devon Swords teaching sports fencing to all age groups, and in recent years qualified with the British Federation of Historical Swordplay to teach medieval and renaissance combat in the Historical Western Martial Arts.
View all posts by Robin Catling »
« Windows 8 previewed by Microsoft
Photograhpy: LCC Students at Tate Modern »

6 thoughts on “Movie Catch-up: Voyage of the Dawn Treader”