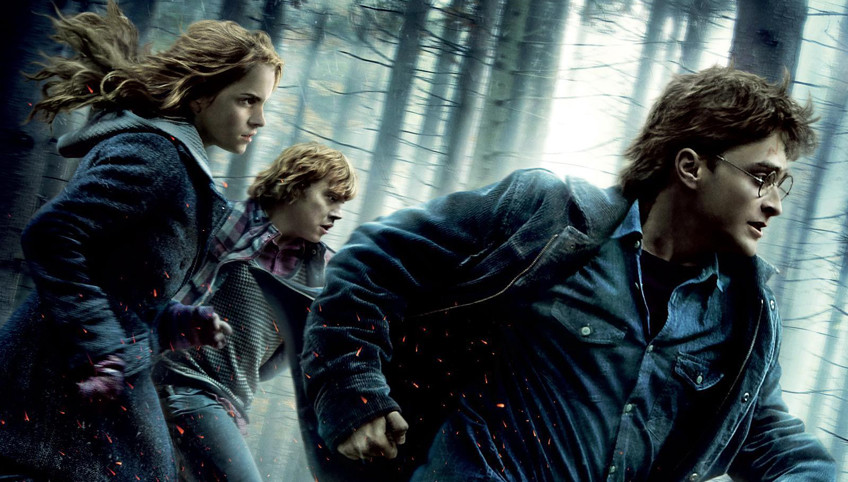 In a time of magic and peril, when movie titles read like football scores (Harry Potter 7, Pirates‘ 4…) the kids grow up with death and destruction all around. This ain’t no Magic Roundabout.

So we come – almost – to the climax. The Potter series is now a full-on quest/chase/revenge tale. Harry Hermione and Ron are on the run whilst searching for the scattered pieces of Lord V’s transmuted soul, so that he can be killed. Again.

The pressure is on, relationships crack, jealousy and post-traumatic stress made worse by a malign Lord of the Rings style artifact. Without mentors and guardians, the kids are fending for themselves out in the wild with only the contents of Hermione’s Mary Poppins bag to sustain them. Without Hogwarts school, what we get is an extended chase, a sort of ‘Harry On Camping’ with Homeric episodes of moderate threat from men and monsters. Whilst it frees us from the constraints of the endless school years, we lurch from episode to episode, the loose plot occasionally absurd, but quickly run dry of any light relief. I suspect the conference table scene where Voldemort all but pushes a Dr Evil eject button on a trembling Malfoy wasn’t intentionally written to be comic.

JK Rowling’s Harry Potter & the Deathly Hallows was a book so big that Warner Brothers have cut it in half in the hope of doubling their money. Never let a movie franchise end too soon. Although that’s twice as much on-screen Potter for the fans, with room for the plot to breath, characters and incidents to be preserved. I have to confess I actually worked on the movie without reading the books and I still have no idea who everybody is. If you’re not a fan, find one and get a crash course in Potter-ology before you watch this, otherwise you won’t have a clue. Many of the regular characters get fleeting cameos, refer to previous incidents and mark time til the apocalypse in Part II.

Along the way the trio have to infiltrate the Ministry of Magic, behind enemy lines and in disguise (cue Where Eagles Dare theme). Which begs the question how did three kids get so competant at combat magic against ministry assassins, police and Death-eaters? Even Daniel Radcliff questions this in the DVD extras. Only late on do we learn the secret of the Deathly Hallows, for which we get a 1970’s Eastern European shadow-puppet animated sequence. Very well done. Very ‘Basil Exposition’.

This franchise has gone on so long, our protagonists are almost grown; “..what is that Potter kid studying at Hogwarts? His PhD?” one American comic said unkindly. He has a point, the three aren’t even teenagers any more, so acting down to that age whilst delivering sparse, clumsy dialogue and trying to emote through the rest of their scenes is not easy. Daniel Radcliffe sometimes hits the ceiling of his emotional range, Emma Watson is somehow girlish and solemn – though always holds the screen – and Rupert Grint now a grizzled officer’s batman.

I suspect there’s a good 90-minute script hiding in this flappy circus tent, if only the writers hadn’t been so literal in the adaptation of the novel. It feels like an awkward middle part of a trilogy. The trailers are out for Part II and it looks like everything including the magical kitchen cauldron is being thrown in. Mark time with Part I to keep abreast of events and wait for the real show to begin. RC

Robin Catling gained degrees in both arts and technology which led to a diverse portfolio of employment. A freelance systems analyst, project manager and business change manager for the likes of American Express, British Airways and IBM, he moved on to web design, journalism and technical authoring. He has also worked in film and television, both behind and in front of the camera, including productions by Steven Spielberg, Martin Scorcese, Ron Howard and Ridley Scott. A qualified three-weapon coach, he runs West Devon Swords teaching sports fencing to all age groups, and in recent years qualified with the British Federation of Historical Swordplay to teach medieval and renaissance combat in the Historical Western Martial Arts.
View all posts by Robin Catling »
« Photography: Tishan Baldeo
Review: Americana BBC World Service & Radio 4 »