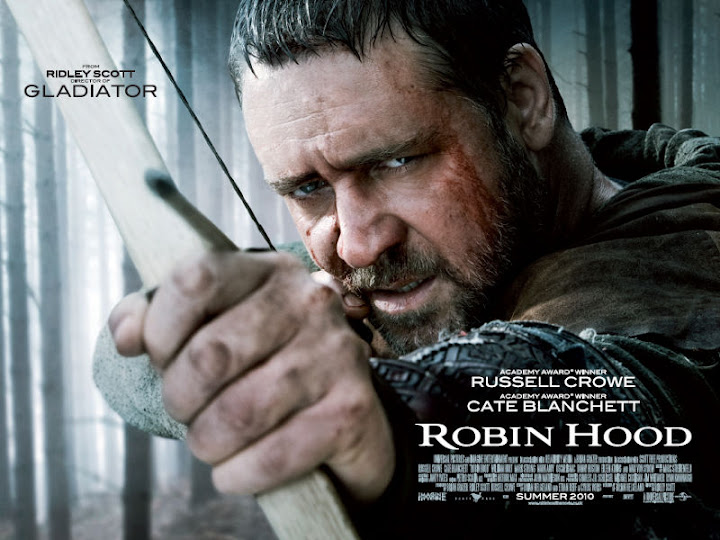 The production company is Merry Men films. It’s the only merry thing in this whole débâcle.  From the Spaghetti-Western style opening credits, you can feel this movie going wrong.

When the less than honourable Richard Lionheart (dependable Danny Huston) gets it in the neck on the way back from the bloody Crusades, Robin Longstride (Crowe) the stout (very stout) English Yeoman desserts the army for home. Caught in an ambush, Crowe gets to escort the king’s crown and noble Robert Locksley’s sword back home, travelling in disguise as Locksley…

On arrival, Locksley senior (wily old stager Max Von Sydow) suggests continuing the subterfuge to defend the estate, including the spikey widow Marian (Kate Blanchett) against its enemies. Cleverly, we get both versions of Hood, the yeoman and the noble in one. Sadly it’s the first and last clever twist in the film.

Made ten years after Gladiator and the fifth film partnering Ridley Scott with Russel Crowe, they were clearly hoping for more of that magic. Instead we got more of A Good Year. Brian Helgeland’s script got butchered on a daily basis throughout the shoot (I know, I was there), as we plodded through a conventional ‘origins’ story. The merry men just grumbled and complained without doing much. Friar Tuck’s (Mark Addey) comic relief wasn’t funny. Robin and Marian were both curmudgeonly and bland. There’s a middle hour which is actually DULL. How do you make an hour of Robin Hood dull??

Hood’s legendary ‘rob the rich, give to the poor’ barely featured. Matthew Macfadyen’s buffoon of a sheriff is elbowed off-stage by a collection of villains playing medieval politics; an electrifying Oscar Isaac as thoroughly bad Prince John, the invading King Philip of France and double-agent Godfrey (always watchable Mark Strong, not quite as over-the-top in this as in Sherlock Holmes, but much the same performance). At least they got their accents right.

Even my father asked what was wrong with Crowe’s accent. You can spot the shooting order of the movie by the accents. It went from Crowe’s RP standard English through ecky-thump Yorkshire to a touch of the Irish. Only when the shoot moved to Lincolnshire did Crowe pick up his voice coach and get the Nottingham accent right. Blanchett sounded to have bused in from the other side of the Penines via Sydney. Not even their collection of Oscar wins and nominations could rise above leaden plotting and tedious dialog and there was more spark between Crowe and the wolfhounds than with Blanchett. Lumbered with some ‘Englishman’s home is his castle’ codswallop – echoes of Braveheart – and his dead dad’s draft of Magna Carta via a bit of psychotherapy, ‘recovered memory,’  Crowe doesn’t once rise to his performance in Gladiator.

By the end we got Saving Private Hood with carnage on the beach, underwater shots with arrows arcing down through floating corpses, ludicrous medieval landing craft with bow-ramps and a special appearance by Blanchett and the Lost Boys from Peter Pan. All shot in glorious wobble-cam so shaky you can’t actually tell what’s going on.

In the epilogue, King John burns the Magna Carta, Robin is outlawed… and there it stops. Crowe spoke enthusiastically at release time of a sequel, but it looks like the money-men will have the last word on that.

For all his stamina, the visionary Ridley Scott of Alien and Blade Runner whom so many have imitated, has faded to a journeyman hack dealing in clichés of other movies, including his own. Everyone I know who was in it (stars excepted) hated it, everyone else unconnected to the film liked it with reservations. It’s not likely to go down as a classic. But I said that about Prince of Thieves. Now there’s a movie I really detest… RC

Robin Catling gained degrees in both arts and technology which led to a diverse portfolio of employment. A freelance systems analyst, project manager and business change manager for the likes of American Express, British Airways and IBM, he moved on to web design, journalism and technical authoring. He has also worked in film and television, both behind and in front of the camera, including productions by Steven Spielberg, Martin Scorcese, Ron Howard and Ridley Scott. A qualified three-weapon coach, he runs West Devon Swords teaching sports fencing to all age groups, and in recent years qualified with the British Federation of Historical Swordplay to teach medieval and renaissance combat in the Historical Western Martial Arts.
View all posts by Robin Catling »
« Review: Click Podcast BBC World Service
Catch-up MS Office 2010 Other Highlights »