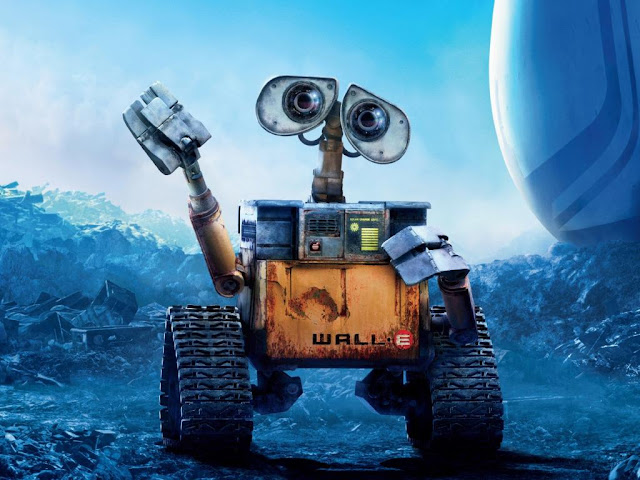 I tweeted recently that I hated Percy Jackson and the Lightning Thief, only to be sold “its a kid’s film, lower your expectations.” Well, I like kids films and see no reason to lower my expectations.

The Wall-E character is the animated mash-up of E.T. and Johnny Five (Short Circuit), both movies I hated. Wall-E is a warm, funny, likeable character, full of personality and a rare work of collective genius and I love it…
But I’m not watching it as a kid. There’s shades of so many classic sci-fi movies I’ve seen; Silent Running (Robinson Crusoe), 2001 A Space Odyssey, Lost in Space (Swiss Family Robinson), The Shape of Things to Come.

Wall-E is the sole remaining robot janitor left behind to clean up humanity’s ecological disaster, 700 years after mankind evacuated the Earth. ‘He’ is a grungy, low-tech rude mechanical, tirelessly recycling junk, with a sprightly cockroach his only friend. Wall-E collects human artefacts, grows a plant and watches the musical Hello Dolly on repeat. He has the soul of a romantic.

Eve is the hi-tech robot probe that lands in search of life-signs. She glows, she flies, she has a massive ray gun in one arm and a smooth white shape. Wall-E is smitten. He has only one choice when the shuttle returns for Eve and the plant and that is to follow to the flagship, the Axiom, to discover what happened to humanity. The answer is one of the greatest acts of Hollywood satire ever. Humans have been reduced to blobby, helpless innocent couch potatoes, wholly dependent on robotic servants. On the plus side, they are well adjusted and perfectly socialised, so 700 pampered years in space can’t be all bad (quite how this bunch of humans is going to cope with an Earth that is still a tornado-ridden dust-ball isn’t explained).

This movie is one set piece after another, every one stuffed full of references and details. The Auto-pilot is a ship’s wheel and talks like a Cylon from the original Battelstar Galactica. There’s a trip to the trash compactor (Star Wars), Wall-E and Eve waltz in space (Astair and Rogers with a hint of Busby Berkley), the captain of the Axiom wakes to the sound of the Blue Danube (2001).

Wall-e is a silent clown like Harold Lloyd or Buster Keaton; well-meaning, loyal, doggedly persistent and causing unintended chaos wherever he goes. He is also the underdog, battling the odds to do the right thing and if you don’t cheer him on, you’re made of stone. If you don’t believe in a romance between a laser-jet printer on wheels and a flying i-Pad, you’re still a stone. After Monsters Inc. and Up, Wall-E is more proof that some of the best story-telling is in animation. Loved it. RC

Robin Catling gained degrees in both arts and technology which led to a diverse portfolio of employment. A freelance systems analyst, project manager and business change manager for the likes of American Express, British Airways and IBM, he moved on to web design, journalism and technical authoring. He has also worked in film and television, both behind and in front of the camera, including productions by Steven Spielberg, Martin Scorcese, Ron Howard and Ridley Scott. A qualified three-weapon coach, he runs West Devon Swords teaching sports fencing to all age groups, and in recent years qualified with the British Federation of Historical Swordplay to teach medieval and renaissance combat in the Historical Western Martial Arts.
View all posts by Robin Catling »
« How-to: Computer Backup Strategy Part One – World View
Review: Microsoft Baseline Security Analyzer »