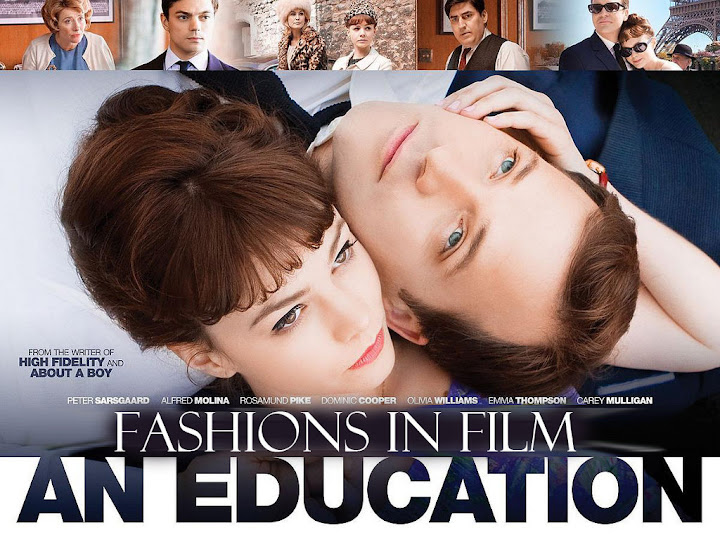 Britain, 1961; little sign that post-war austerity is giving way to jazz and fashion; a grey, washed out, lightless country in which Jenny (Carey Mulligan), a teenage girl from middle-class Twickenham, looks to academic success at Oxford to secure opportunities beyond factory girl, secretary or teacher.

Escape to a brighter, sun-lit world pulls up alongside in a Bristol sports car in the shape of dapper thirty-something David (Peter Sarsgaard) and soon she’s introduced to art auctions, jazz clubs, sophisticated restaurants. Overcoming the objections of her note-perfect bourgeois civil servant father (Alfred Molina), it’s on to country getaways and Paris…
This is a handsome film which manages to elicit our sympathy for Jenny’s ambitions while at the same time holding back our warning shout about getting into flash cars with alluring yet creepy older men. Mulligan’s eager ingénue drinks in all experience, from Notre Dame to slumming it at Walthamstow Dogs, while evoking Jean Seberg and Audrey Hepburn.

Novelist Nick Hornby skilfully adapts Lynn Barber’s essay of a strange affair she had at the age of sixteen with a man in his thirties. This isn’t Lolita, there’s no prurient voyeurism. Nor is this some sentimental morality tale (I feared another Dead Poets’ Society) or wallowing-in-misery kitchen-sink melodrama. Instead it is very funny. Hornby finds absurdity in each stranger-than-fiction episode and exposes the painful delusions and state of denial of each character.

American Peter Sarsgaard plays well as child-man and would-be seducer David, but one can’t help thinking Colin Firth would have been better. I felt some unease at David revealing his Jewishness, although it helps explain his dubious morality in firmly C-of-E post-war Britain which was never as tolerant as we fondly mis-remember it. David is happy to uses his outsider status as excuse, fuel and weapon against other people’s bigotry.

But here is the weakness in the script. Although David has a compulsive liar’s sixth sense for other people’s weaknesses and the sociopathic charmer manages to seduce Jenny’s parents into complicity, all of them appear sensible enough simply to slam the door on him. We can spot a chancer and a fantasist, why can’t they? Hornby overplays the Greek tragedy of good people falling to their own weaknesses, the inevitable messy demise seems hardly inevitable at all.

Excellent in the supporting cast are business associate Danny (Dominic Cooper from The History Boys and Mamma Mia!), with girlfriend Helen (Rosamund Pike, who is just too intelligent for the dumb-blonde role assigned). Olivia Williams shines as Jenny’s English teacher.

But it is Carey Mulligan’s standout performance that powers the story, growing through her ‘life’ education; by turns eager, awkward, outraged, joyful and deflated. The performance overcomes the deficiencies in the script and Jenny is never less than sympathetic.

Under Danish director Lone Scherfig, the movie recreates a time and a place in post-war British history without allowing period detail – even to Juliette Gréco LP’s playing on a Dansette record player – to overcome character and ideas. RC

Robin Catling gained degrees in both arts and technology which led to a diverse portfolio of employment. A freelance systems analyst, project manager and business change manager for the likes of American Express, British Airways and IBM, he moved on to web design, journalism and technical authoring. He has also worked in film and television, both behind and in front of the camera, including productions by Steven Spielberg, Martin Scorcese, Ron Howard and Ridley Scott. A qualified three-weapon coach, he runs West Devon Swords teaching sports fencing to all age groups, and in recent years qualified with the British Federation of Historical Swordplay to teach medieval and renaissance combat in the Historical Western Martial Arts.
View all posts by Robin Catling »
« Photography: Joost Rooymans
Review: Secret History of Social Networking »