Photography: Glamour of the Gods Glamour of the Gods is a celebration of Hollywood portraiture from the industry’s ‘Golden Age’, the period 1920 to 1960. From Greta Garbo and Clark Gable to Audrey Hepburn, James Dean and Marilyn Monroe, it is these portraits that transformed actors and actresses into international style icons. In many cases these are the career-defining images of Hollywood’s greatest names and help to illustrate their enduring appeal…
One of the best exhibitions I ever attended was at the Royal Festival Hall about fifteen years ago; a collection of photographs from the Magnum Agency; Dean, Monroe, Dietrich plus some American street photography from various cities and events.

This exhibition, then, is right up my street, featuring over 70 photographs, fantastic vintage prints from the archive of the John Kobal Foundation, some of which are on display for the first time. Many of these are the official studio press release and poster photo’s.

Organised into decades, it follows the development of studio media management in creating and marketing the stars of the Hollywood dream factory – but producing some extraordinary artworks in the process.

The 1920’s saw the birth of the talking picture, Cecil B. de Mille’s biblical epics at one end and adaptations of literary and theatrical drama’s at the other. The 1930’s became the ‘Golden Age’ of Hollywood, when the studio system created and controlled the movie stars, produced original scripts in a  range of genres, all in glorious Technicolor. 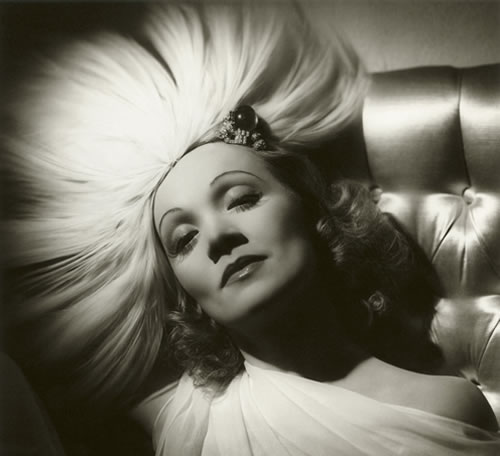 The 1940s began with World War II, to which the European emigre studio heads responded with vigour, resistance movies such as Casablanca (1942); meanwhile the ‘film-noir’ genre darkened the tone (The Maltese Falcon, 1941) while the Hollywood musical extravaganza raised moral. By the end of the forties, many names were blacklisted during the McCarthy witch-hunt investigations into Communist infiltration of the US.

The 1950s saw the decline of the Hollywood studio system, hastened by changing tastes and the competition from television. Epics such as Ben Hur (1959) and musicals such as Singin’ in the Rain (1952), contrasted with the rise of cynical anti-heroes and method acting (Brando and Steiger among many).

The real heroes of this exhibition are not the Hollywood stars, but the barely remembered photographers, Bert Longworth, George Hurrell, Robert Coburn, John Engstead, Clarence Sinclair Bull; did any of them imagine the ephemeral by-products or an ephemeral movie industry would thrill and inspire us decades later?

Organised by the Santa Barbara Museum of Art, this exhibition represents a minute selection from the John Kobal Foundation Archive; some 22,000 black and white original negatives from 1920-1960 featuring Hollywood star portraits, scene stills and production and publicity images. Kobal was an eminent film historian, author and collector of Hollywood film photography, preserving and exhibiting the photo’s from the 1970’s until 1991, when the Foundation took over on his death.

Presented in the National Portrait Gallery’s formal and rather austere style, it is properly lit and curated, with plenty of supplementary information and well worth a look for any movie, photography or social history buff. RC

2 thoughts on “Photography: Glamour of the Gods”