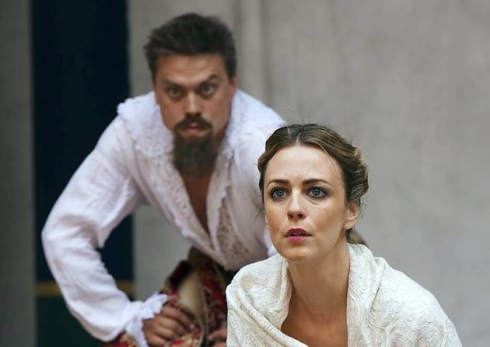 The company based at the reconstructed Shakespeare’s Globe Theatre on London’s South Bank have delivered another excellent production in the finest traditions of Elizabethan/Jacobean drama.

Forget the bodice-ripping BBC Tudors or Shakespeare’s own carefully white-washed commissions, this is the Tudor/Jacobean politics of religion at it’s most brutal and polemic…
As a venue, the reconstructed Globe is utterly unlike any other, with it’s open roof, groundling space (‘mosh-pit’) in front of the stage and musicians’ gallery. The performers make full use of the thrust stage as a playing area and for access on an off. The stage-craft in this respect is immaculate, complimented in the period style by live songs and musical accompaniment, even to the bergomask dance for the finale.

Beginning with James I’s accession to the English throne and immediate issues of religion diving his kingdom, this episodic play flips across eighty years of religious and dynastic turmoil, beginning and ending with Ann’s ghost and the iconic King James Bible, based on Tynedale’s banned text.

In this portrayal, Ann Boleyn is a naive, self-righteous courtier, self-justified (as many of the characters are) in promoting her cause as for the good of the nation. She would have you believe she is the founder of the Protestant Reformation in England – among Brenton’s many bold political statements in this play.

There are some notable performances. Miranda Raison’s Anne Boleyn remains sympathetic despite her many faults, Anthony Howell’s vainglorious King Henry VIII is vital without becoming a villain, Julius D’Silva’s Thomas Cromwell suitably Machiavellian but never quite as villainous as the historical person. Brentons’ fine satirical dialogue is in safe hands with John Cummins two courtiers and particularly combined with James Garnon’s remarkable physical performance as James I. Occupying a space between Billy Connelly and Eddie Izzard, with a dash of Ewan MacGregor, Garnon’s camp Scottish monarch protests too much of politics and religion but emerges as a canny operator to manoeuvre all factions of the Church to create HIS Bible and unite the nation under him.

As the lighter end of Brenton’s repertoire, this engaging and entertaining play remains a chiefly political work, echoing Shakespeare and his contemporaries at their boldest. RC

Robin Catling gained degrees in both arts and technology which led to a diverse portfolio of employment. A freelance systems analyst, project manager and business change manager for the likes of American Express, British Airways and IBM, he moved on to web design, journalism and technical authoring. He has also worked in film and television, both behind and in front of the camera, including productions by Steven Spielberg, Martin Scorcese, Ron Howard and Ridley Scott. A qualified three-weapon coach, he runs West Devon Swords teaching sports fencing to all age groups, and in recent years qualified with the British Federation of Historical Swordplay to teach medieval and renaissance combat in the Historical Western Martial Arts.
View all posts by Robin Catling »
« Review: Cecilia Ahern – Thanks for the Memories
Full Circle Podcast 22, Mad Max Meets Ben Hur »