Another Movie Catch-up: Prince of Persia – The Sands of Time 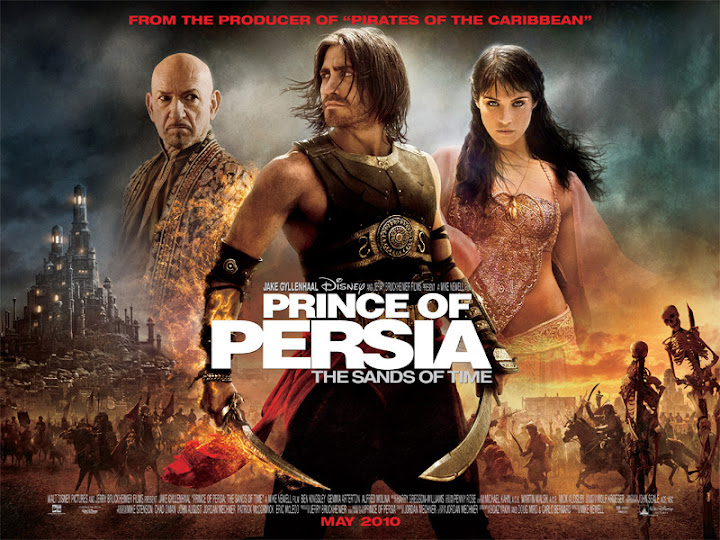 The Prince of Persia would have been great for me with the sound muted. This might sound harsh, but I spent most of the film marvelling at why it had been made. We all know why, of course – money, and it proved lucrative deal, with thousands of gaming punters swarming to the cinema to see it. Watching it, however, was like viewing a computer demo without the controls. I wanted to turn it off near the beginning and finish it myself.

It’s a romp of the impossible – a poverty to riches to poverty to riches tale. Dastan (Jake Gyllenhaal), an orphaned street boy, is adopted by the king (Ronald Pickup) after a show of heroism. Now a prince of the palace, he leads the attack on the city of Alamut, ploughing through miraculous stunts uninjured, and achieving things that are only possible with CGI; naturally enough, none of the characters comments on this.

The king is poisoned and Dastan’s brother, Tus, (a commendable Richard Coyle), takes the throne. Dastan, the suspected murderer, flees with captured princess Tamina (Gemma Arterton) in tow. During the battle for Alamut, Dastan recovers a dagger from Tamina’s courier; it transpires that this weapon can turn back time and is Dastan’s key to restoring peace. Someone in his adopted family, however, is prepared to do anything to get it, and Dastan must convince people of his innocence, before it is too late. The ending is neat, though predictable.

The film’s downfall is that it doesn’t try to be novel. The script has a platitude per minute, and the action sequences are straight from a computer-game, to push your suspension of disbelief precipitously over the edge. There are a couple of inventive moments, including crossbow shooting, giving Dastan handholds to climb up the castle wall to breach the castle, but these are few and far between.

I genuinely like the idea of the knife (who wouldn’t want a weapon that reverses time when you press the hilt?) and the visual effects surrounding these moments are striking and dramatic. The film also has a pounding soundtrack. But I’m exaggerating the quality of these – it’s just a relief to find something that’s reasonably good.

So, the Prince of Persia fulfilled its purpose. It made money. It promoted the game. It had enough stars in the cast to ensure a stream of punters, but, unfortunately, it has a high-score of only one in my ranking. VP

3 thoughts on “Another Movie Catch-up: Prince of Persia – The Sands of Time”