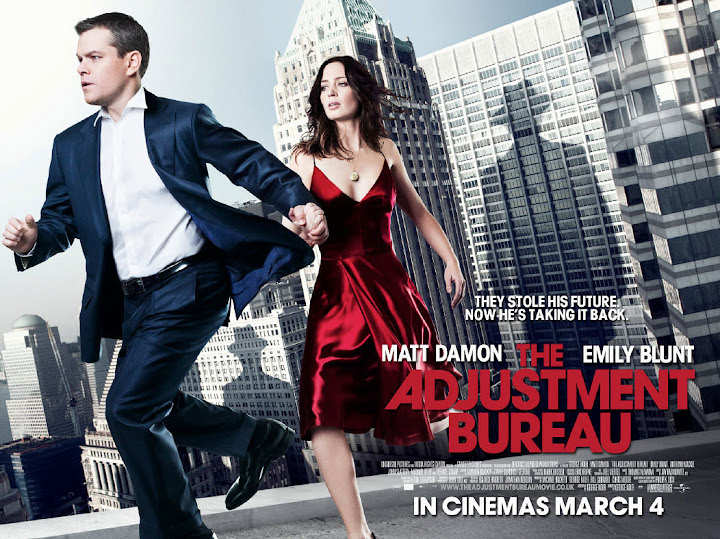 “All I have are the choices I make, and I choose her, come what may.”

David Norris (Matt Damon) is the youngest ever Congressman, about to blow a Senate seat through an immature indiscretion. Despite an electrifying concession speech, his thoughts are entirely taken up with the chance meeting in a wash room with British dancer Elyse (Emily Blunt), a meeting, it turns out, that is not in The Plan, enacted by the Adjustment Bureau’s men in hats…

If you know the great man’s works, the description “light-hearted Philip K Dick romantic thriller” might be enough to deter you. Otherwise this jaunty, futurist conspiracy thriller, freely adapted by Bourne screenwriter George Nolfi, might be just your thing. Although, ‘freely adapted’ is both a strength and a weakness.

Bradshaw of the Guardian calls it “The Manchurian Candidate written by Charlie Kaufman,” to explain the clash of paranoia and absurdity in a movie played entirely straight but with frequent comic touches and light dialogue. Less of an action picture than the trailer portrays, the movie frequently sits Damon down (literally) to consider its’ themes of love, free will and fate.

There is unforced romantic chemistry between the two leads, but Philip K Dick would never have written anything this sweet, this light or this silly in the translation from the page to the screen. There are conflicting nods to so many other movies either in tone (Michael Powell’s A Matter Of Life and Death, Frank Capra’s It’s A Wonderful Life, Hitchcock’s North By North-West) or style (Paycheck, The Matrix, Brazil), that sometimes this movie seems to forget what it is.

It is all-too quickly revealed just who the Adjustment Bureau staff are. We want the controlled menace of the Agents from the Matrix, what we get are fine comic turns from John Slattery and Anthony Mackie. In the face of Damon’s resistance to his ‘destiny,’ his case is pushed ‘upstairs’ to the venerable Terrence Stamp, who at this stage of his career, has all the gravitas, but can’t really care about the silly stuff he’s asked to prop up. Even here, the movie lacks Dick’s biting cynicism.

Damon is a good choice for the straight-up, honest, charismatic young politico with his integrity intact. Not the least Bourne-like, he has to think and run, not fight, so this is mostly a chase movie with some existential, quasi-religious overtones. Damon examined it better himself in Kevin Smith’s angelic-farce Dogma.

We get to the last act, essentially a heist ‘break-in’ movie; we get the ‘rules’ to the Adjustment Bureau’s hats and doors just to make the running that much harder, but no time for any set-backs to invoke them.

That said, New York never looked finer, a star in every frame. The chases are well executed and the performances never flag. Powell would have applauded the feel-good ending, even if Philip K Dick would have thrown his pop-corn at the screen. RC

Robin Catling gained degrees in both arts and technology which led to a diverse portfolio of employment. A freelance systems analyst, project manager and business change manager for the likes of American Express, British Airways and IBM, he moved on to web design, journalism and technical authoring. He has also worked in film and television, both behind and in front of the camera, including productions by Steven Spielberg, Martin Scorcese, Ron Howard and Ridley Scott. A qualified three-weapon coach, he runs West Devon Swords teaching sports fencing to all age groups, and in recent years qualified with the British Federation of Historical Swordplay to teach medieval and renaissance combat in the Historical Western Martial Arts.
View all posts by Robin Catling »
« How-to: Change default application for a type of file
Review: Linux Mint 11 »

6 thoughts on “Review: The Adjustment Bureau”