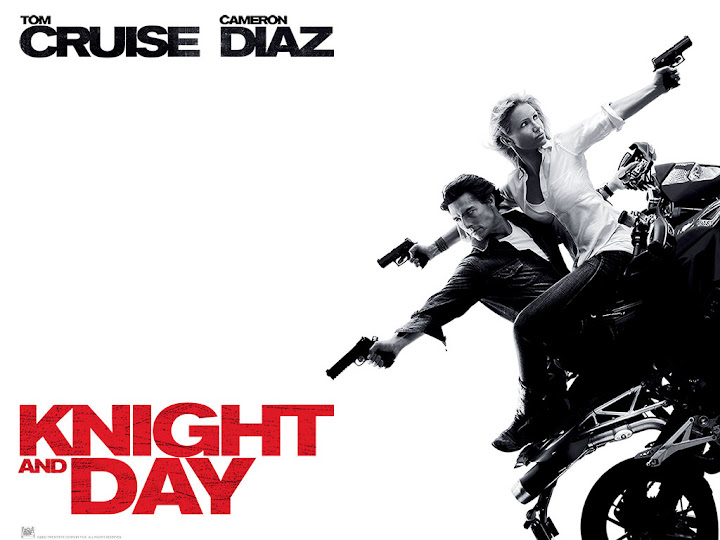 It probably sounded like a dream ticket to some studio executive; Tom Cruise as super-spy Roy Miller (‘Knight,’ watch carefully) and Cameron Diaz as ordinary girl June Havens (‘Day’ – I don’t get it) in a globe-trotting action-conspiracy-chase-thriller, complete with plane crashes, car chases, bike chases, bull chases, trains, assassins and an uber-Duracell-battery-Maguffin to justify the whole shebang.

To be kind, it’s Bond-lite, MI-lite, Bourne-even-Liter and Hitchcock-insubstantial. It’s a breezy, pop-corn filled two hours plus of running, shooting and slight gags with two bankable stars for those who prefer their movies spoon-fed.

Being more honest, there’s not much to like about this waste of a hundred million dollars or whatever the final budget was.

The characters really don’t matter; Cruise swaggers about being athletic and flashing the famous grin, when not flashing his specially buffed torso. Diaz’s blonde bombshell is a ‘vintage car restorer’, but seems to have thrown in a one-dimensional performance when we know she can do so much better (In Her Shoes). Having said, ‘oh good, we’ve got Cameron Diaz’ the producers give her nothing to do but alternately frown (not a good look) and scream (very 1950’s), all the time being generally annoying. Diaz’s civilian life is unconvincing, her turn as detective unbelievable (unbelievably stupid, actually) and the a-b-c sub-plot with Cruise’s parents is too pat.

Cruise turns the charisma up to eleven, clearly having a whale of a time, though sadly no one else is. His Roger Moore, Cary Grant style delivery of allegedly funny lines falls flat. Diaz can’t pull off the emotional turn-abouts demanded. There is no chemistry in the Cruise-Diaz partnership at all.

The script is lazy, cliched, by-the-numbers, stupid, stupid, stupid. The dialog that links the action set-pieces is workman-like at best, the conspiracy plot telegraphed worse than in the Cruise franchise Mission Impossible, the supporting characters wafer-thin.

The body count in the violent action scenes is up to Van Damme and Stallone levels and is deplorable in such a mainstream movie in that many of the killings are quite graphic, though mercifully swift.

The international episodes seem specifically aimed at killing as many foreigners as possible, which is excusable since all non-Ameircans in this movie are a) evil, b) stupid and c) camp.

Director James Mangold (Kate & Leopold, Girl, Interupted, Cop Land) is usually better than this. He keeps the action going, probably realising this isn’t the finest character work to get bogged down in.

How about the action then? There’s so much CGI in this movie, the whole thing looks like a cartoon, despite the claims that Cruz did all his own stunts. There’s a roof-top chase that gets close to perilous, but Daniel Craig already did it better. The CGI climax feels like an afterthought to a movie that’s already used up it’s best moves. The epilogue brings the script nicely full circle but by that time, you just want it to be over.

Robin Catling gained degrees in both arts and technology which led to a diverse portfolio of employment. A freelance systems analyst, project manager and business change manager for the likes of American Express, British Airways and IBM, he moved on to web design, journalism and technical authoring. He has also worked in film and television, both behind and in front of the camera, including productions by Steven Spielberg, Martin Scorcese, Ron Howard and Ridley Scott. A qualified three-weapon coach, he runs West Devon Swords teaching sports fencing to all age groups, and in recent years qualified with the British Federation of Historical Swordplay to teach medieval and renaissance combat in the Historical Western Martial Arts.
View all posts by Robin Catling »
« Highlights of OGG Camp Day Two
Review: Arnova 8 Android Tablet »