Movie Catch-up: Me and Orson Welles 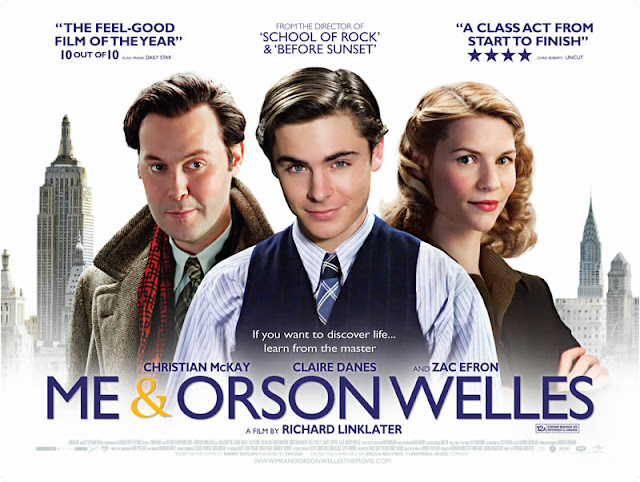 Before Citizen Kane, the Magnificent Ambersons and the radio version of War of the Worlds that terrified America, Orson Welles was a struggling 22-year old actor-director, long on confidence, short on cash and already building the edifice of his own ego.

Set in 1937 New York, in a struggling Mercury Theatre on Broadway, Orson Welles shores up his artistic endeavours taking money from commercial radio to finance his company (as became the pattern of his life)…

Shot cheaply in New York, Pinewood and the Isle of Man, the movie is lively and skips on apace, with plenty of period references, but is certainly no Radio Days or Cinema Paradiso (Pacino’s Two Bits would have done). Instead it has to trade on it’s performances.

Christian McKay’s BAFTA nominated performance as Welles is by turns, camp and sentimental (which Welles never was on screen, at any rate), bombastic and domineering (but never enough). Whilst it is an engaging impression, it is no impersonation. McKay’s vocal range is too high even for the young Welles, his Orson glower is light on menace, his threats and rages consequently thin. This Welles is ‘a bit difficult’ but not the impossible, irrepressible force of nature of Welles’ reknown.

Claire Danes is the dream girl all the actors pursue but only Richard captures. But she only wants him as a little innocent relief from her frankly hard-headed  pursuit of Welles,  David O. Selznick or any other influential man of the arts who can further her career. It is a gauche performance that rejects moral judgement and our sympathy. She’s a modern girl but she’s difficult to like.

At the centre of things, Zac Efron continues to show signs of developing into a first rate actor, despite his handicap being ridiculously pretty. His 17 year old Richard Samuels is a conflicted mess of youthful bravado, naivety, optimism and self doubt. Bucking school and parental expectations, he chases the dream of an artistic life, without, it seems, much of an idea how to get there, stumbling into a bit part with Welles’ company and quickly going from darling protege to discarded enemy. Efron’s bumbling innocent makes a good guide through this heavy pencil-sketched period world.

The emotional heart of this movie really lies in the crucial scenes Richard has with would-be young writer Gretta Adler (Zoe Kazan), her earnest attempts to be published being the real artistic endeavour, compared to Welles’ bombast and showmanship. Without these small, quiet scenes, the movie would be a smaller, quieter and emptier vessel.

Robin Catling gained degrees in both arts and technology which led to a diverse portfolio of employment. A freelance systems analyst, project manager and business change manager for the likes of American Express, British Airways and IBM, he moved on to web design, journalism and technical authoring. He has also worked in film and television, both behind and in front of the camera, including productions by Steven Spielberg, Martin Scorcese, Ron Howard and Ridley Scott. A qualified three-weapon coach, he runs West Devon Swords teaching sports fencing to all age groups, and in recent years qualified with the British Federation of Historical Swordplay to teach medieval and renaissance combat in the Historical Western Martial Arts.
View all posts by Robin Catling »
« Another Movie Catch-up: The Twilight Saga
How-to: Blogger Traffic Analysis »

4 thoughts on “Movie Catch-up: Me and Orson Welles”