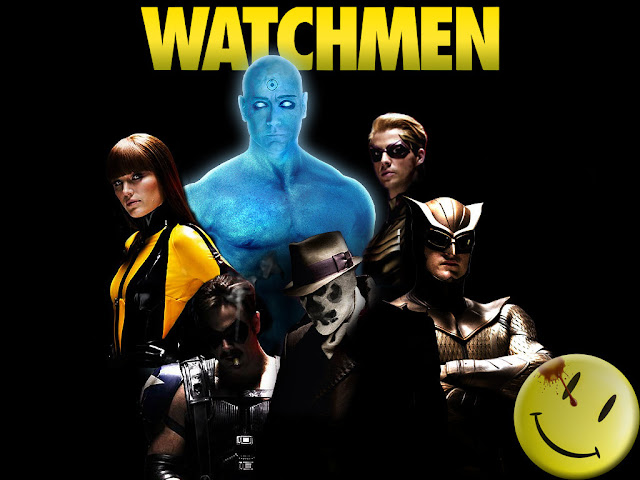 Zack Snyder (director of 300) continues his line of comic-book adaptations with the cult classic Watchmen, in an all-too-faithful rendering of Brian Moore and Dave Gibbon’s meditative opus. And that’s where the trouble starts.

Snyder almost renders verbatim Moore’s critique of a near-fascist alternate America in 1985, in which the US won in Viet Nam, ‘Tricky Dicky’ Nixon got himself four terms as President and the Cold War brings the Earth to five minutes to midnight on the Apocalypse Clock; it’s not a question if World War Three will start but when. In this world, we have super-heroes of the damaged kind, the Watchmen…
It’s difficult to know where to unravel Snyder’s 2 3/4 hour spectacle, rescued from twenty-odd years of pre-production hell and studio wrangling. It feels like several competing movies jammed together.

This is not a kids’ comic-book movie. These superheroes are a pack of disfunctional human beings; vigilante murderers, rapists and sociopaths, which is presumably why the Nixon government bans them all, except for Dr. Manhattan (Billy Crudup in an astonishing motion-capture performance). As the god-like embodiment of quantum relativity, almost all of time, space and matter at his command, he is now so remote from human morality it’s doubtful that he will intervene to save it. The ex-Watchmen include autocrat Ozymandias (Matthew Goode), Silk Specter 2 (Malin Akerman), old-fashioned hero Nite Owl 2 (Patrick Wilson), sociopath Rorschach (Jackie Earle Haley) and neo-fascist stooge The Comedian (Jeffrey Dean Morgan). Angry, bitter and disillusioned, this group of adrenaline junkies is so damaged, the only time they achieve any self-fulfilment is when they are dishing out extreme violence.

And the violence is Snyder-trademark extreme, with his leery, sadistic and voyeuristic revelling in every action sequence, usually with blood and cruelty where it’s not necessary. Snyders’ translation of Moore’s world is hyper-real, in dull, grimy, washed-out nightscapes, reflecting the tired, corrupt and morally bankrupt society.

The ‘second’ movie is flush with a lot of spandex and capes and can’t shake off lurid various incarnations of Batman-style ka-pow, especially in the camp pizazz of Ozymandias’ secret arctic base.

The third is a glorious sci-fi epic with spectacular CGI set on Mars, where Dr. Manhattan contemplates existence in his flying crystal-clock palace. There is an awful lot of CGI in Watchmen of a high standard.

The fourth is a catalogue of sexual anxiety, kinky and loveless sex, sexual violence and sexual disfunction for which the cure is often more violence. Hence Watchmen got the unprecedented 18 certificate, where the supposedly ultraviolent Dark Knight was a 12A.

No surprise then, that four competing styles don’t gel together. Visually the movie works well, the action set-pieces are brutally thrilling (in a guilty way), the performances from decent, heavy-weight actors grounding otherwise silly characters and costumes. Although the script manages to keep all of the biting satire, the dialog is either pretentious or inane. Hard though it tries to comment on fascism, free-will and democracy, it just can’t rise out of the genre. Just when you think the movie will power on to a strong conclusion, there is one substantive change in the threat to mankind which is weaker and works less well than Moore’s original.

Mesmerising, spectacular, thoroughly deranged though it is, the reason the Watchmen movie doesn’t quite work is the same as the reason the original graphic novel doesn’t work: it’s not a comic-book, its a political and philosophical tract dressed up as a comic-book and the brutal thrill-ride doesn’t lift it above the cult draw it shares with the source book. RC

Robin Catling gained degrees in both arts and technology which led to a diverse portfolio of employment. A freelance systems analyst, project manager and business change manager for the likes of American Express, British Airways and IBM, he moved on to web design, journalism and technical authoring. He has also worked in film and television, both behind and in front of the camera, including productions by Steven Spielberg, Martin Scorcese, Ron Howard and Ridley Scott. A qualified three-weapon coach, he runs West Devon Swords teaching sports fencing to all age groups, and in recent years qualified with the British Federation of Historical Swordplay to teach medieval and renaissance combat in the Historical Western Martial Arts.
View all posts by Robin Catling »
« Review: The Fry Chronicles by Stephen Fry
How-to: Buy the Right USB Hub »