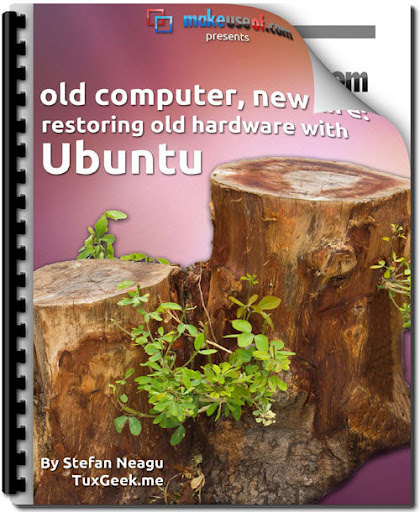 This new guide by MakeUseOf author Stefan Neagu does just what it says on the cover. Outlining everything you need to know to get Ubuntu up and running on older computers, all those old (and not so old) machines that don’t quite race along with Redmond’s finest software, this is a guide to free software in general and an excellent beginners’ installation guide to Ubuntu Linux in particular.

In 33 pages, this guide steps through preparing by backing up data and checking machine specifications, downloading an installable Ubuntu disk, then onto the installation itself, quickly and efficiently covering the process. The guide even outlines the difference between the Unity 2D and 3D interfaces and how to check for 3D capability.

Samba file-sharing is covered, as are making new and ongoing backups with Deja Dup and setting up the firewall with the gufw tool.

That is the success story, however, in places (editorial tone and attitude aside – it’s very much an informal ‘hackers’ paradise’ in here) the guide falls down. Too much is made at the start of the case for Free Open Source Software (I do wish authors would put this at the back and get on with the subject at hand).

Worst of all, networking proper is glossed over; there’s barely anything on connecting to wi-fi or wired networks for Internet access, but there is a section on configuring ndis-gtk for windows wireless drivers, although not how or why you need them. Networking is the most glaring omission of the whole guide and the one area in which a Linux novice is likely to fall down a deep chasm. The guide covers what is easiest not necessarily what is most critical to ‘MakeUseOf’ the Ubuntu Linux software (I feel a Fry and Laurie sketch coming on).

Given the acknowledgements given to the original sources of information, you realise the guide is essentially a re-packaging of existing materials; skilfully culled, if not entirely successfully.

That said, like all MakeUseOf manuals, the guide is free – but password-protected. You have to join the MakeUseOf site to get the password. It is emailed to you right after you have joined. MakeUseOf is a handy site covering a wide variety of topics and the mailing list does not flood your inbox with a lot of material, perhaps three or four mails a month about the latest technology guides and sections of the website. RC

Robin Catling gained degrees in both arts and technology which led to a diverse portfolio of employment. A freelance systems analyst, project manager and business change manager for the likes of American Express, British Airways and IBM, he moved on to web design, journalism and technical authoring. He has also worked in film and television, both behind and in front of the camera, including productions by Steven Spielberg, Martin Scorcese, Ron Howard and Ridley Scott. A qualified three-weapon coach, he runs West Devon Swords teaching sports fencing to all age groups, and in recent years qualified with the British Federation of Historical Swordplay to teach medieval and renaissance combat in the Historical Western Martial Arts.
View all posts by Robin Catling »
« How-to: Buy the Right USB Hub
Windows 7 Catch-up: Libraries »