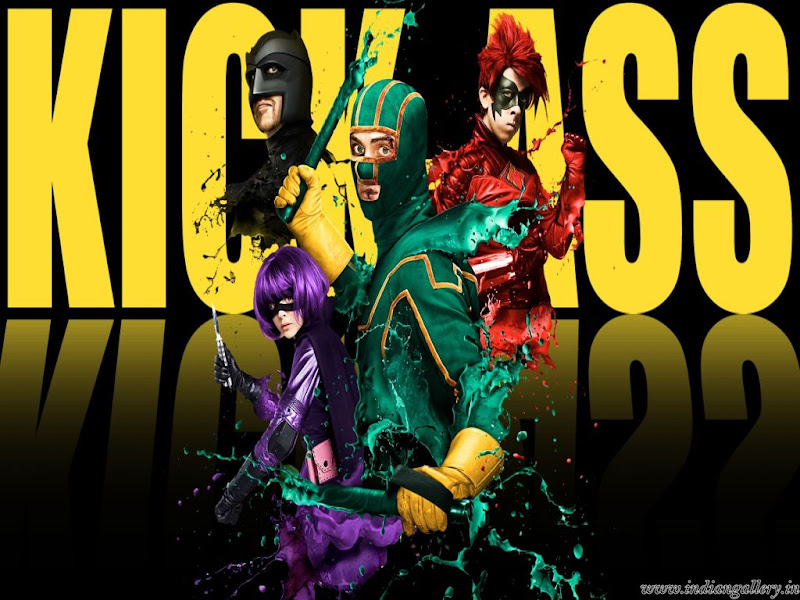 Twisted, funny, subversive; but is Matthew Vaughn’s alternative comic-book adaptation as smart or as hip as it thinks it is? If violent taboo-breaking superhero send-ups are you thing, then possibly; otherwise it’s a vacuous shocker out for a quick buck.

I should have expected the horror scenario of an adaptation by Jane Goldman from Mark Millar’s ultra-violent comic. Kick Ass poses the what-if question; what happens if an ordinary teenager decides to don a superhero costume to fight crime. The answer? A graphic beating, a stabbing and a hit-and-run car accident. That’s just on his first outing…
This is where, after the first twenty minutes, it all breaks down. Comic book geek Dave Lizewski (Aaron Johnson) is the tragi-comic, teenage wannabe-hero, Kick Ass, but after this near-death experience any sane individual would give it up. Dave not only continues solo, but becomes an internet urban legend when his second public intervention goes disastrously wrong, but the bad guys retreat from incriminating camera phones.

On his third intervention, playing hero to get his dream girl from school, Dave gets seriously out of his depth when Hit Girl and Big Daddy start massacring the local hoods. At this point the violence goes Kill Bill, reality departs and the unstoppable desire to show off flashy, stylised martial arts moves and gun fetishes takes over. The approach may have worked in Stardust, in which Vaughn and Goldman broke the fairy-tale mould, but here it turns into an exploitative video nasty. Full of deferential nods to other superhero movies, there’s nothing original or particularly funny in the attempted satire.

Big Daddy is Nicolas Cage, in yet another desperately loopy performance, as the crazed, ex-cop vigilante with a Batman body-armour fetish, out to gain revenge on mobster Frank D’Amico; Mark Strong treading a fine line between genuine menace and pantomime villain. What sets the cap on this demented tale is the rendering of Miller’s manga-heroine Hit-Girl (the charismatic Chloe Moretz), an eleven-year old uber-assassin with pig-tails, who gets to shoot, stab, kick and slice the bad guys whilst matching them for F- and C- words. No, I didn’t imagine it. All this to a cranked-up version of the Banana Splits theme. Nobody is spared.

You would think both Dave and Hit-girl would be traumatised, emotional wrecks less than half way through, but no, the life lesson for both appears to be that extreme violence against criminals is cool, which is exactly where they began. Uber-geek Dave not only gets his charity volunteer dream girl, but discovers she also has a kinky fetish for the superhero violence.

Ultimately, the whole thing fails. I don’t mind bad taste and black humour, or Japanese Manga, but when the double climax ratchets up the blood and body count, a cross-between an actual video-game shoot-em-up and a James-Bond gadget-fest, you known that Marc Millar’s porn-comic appeal to 15-yr old boys has won through.

Just when you think the exploitation has reached its zenith, Moretz appears as a classic manga schoolgirl, in a plaid mini-skirt with her hair in bunches, carrying a big gun. Hit-Girl’s systematic child abuse and brain-washing crosses into sexualised, paedophilic child battery and Vaughn’s only escape is to push further from reality into the comics genre or get banned. I’m generally against censorship, however the movie appropriately got an R-rating in the US but only a 15 certificate in the UK, which defies reason.

There is nothing in this movie untainted by Goldman’s now trademark moral vacuum and desire to shock. Using the worst combination of  sadism and voyeurism dressed up as entertainment, the whole movie is a pernicious glorification of knife and gun crime; it’s shameless, deeply cynical and irresponsible. Worse, it’s got me agreeing with the Daily Mail and the Daily Telegraph. RC

Robin Catling gained degrees in both arts and technology which led to a diverse portfolio of employment. A freelance systems analyst, project manager and business change manager for the likes of American Express, British Airways and IBM, he moved on to web design, journalism and technical authoring. He has also worked in film and television, both behind and in front of the camera, including productions by Steven Spielberg, Martin Scorcese, Ron Howard and Ridley Scott. A qualified three-weapon coach, he runs West Devon Swords teaching sports fencing to all age groups, and in recent years qualified with the British Federation of Historical Swordplay to teach medieval and renaissance combat in the Historical Western Martial Arts.
View all posts by Robin Catling »
« Windows 7 Catch-up: Libraries
How-to: Change Windows 7 User Access Control »