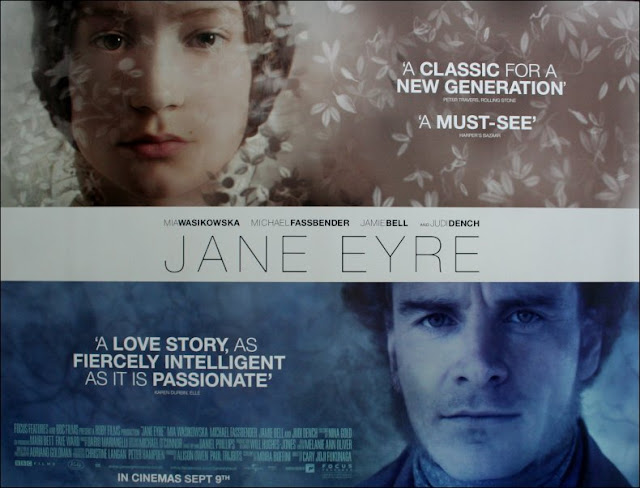 If literary adaptations, bonnets, crinolined-skirts and repressed Victorian romance is not your thing, move on. Otherwise, stay on for the most understated, least hystrionic version of the Charlotte Brontë classic yet.

Rejected by her aunt, spirited young orphan Jane Eyre (Mia Wasikowska) is shipped off to a stark boarding school until the age of eighteen, when she lands the post of governess in the house of one Edward Fairfax Rochester (Michael Fassbender), master of Thornfield Hall. Which is where we begin with her dramatic, unhappy escape across a bleak Northern landscape…

Aussie actress Mia Wasikowska shines as a restrained, free-spirited and principled heroine; immaculately Northern-voiced and filling the screen like a luminous pre-Raphaelite painting, albeit in the muted, washed-out palette of current fashion. Not to be cowed or submissive, she makes a fine foil for one of literature’s difficult romantic heros.

Fassbender simply can do no wrong at the moment. Escaping his predecessors’ fates – William Hurt’s crashing dullness and Orson Welles panotmime theatricality – Fassbender’s Rochester is arrogant, tortured, tormented and clearly fallible. Realisation comes early that he has found his equal in Jane, his social inferior. Only the running time hastens his confession to his acts of betrayal. For all his faults we have a three-dimensional and sympathetic Rochester for our time.

The focus remains on Wasikowska’s Jane throughout, as close to a first-person, continuous narrative as you can get in the movies. The ‘action,’ such as there is, is entirely personal to her; we are spared flashy fire scenes at Thornfield because they don’t fit. Much is made of landscapes and Jane’s place in them, to answer the critics complaint that literary adaptions are never filmic enough.

Director Fukunaga’s style reminds me of the similarly restrained Ang Lee Sense and Sensibility some years ago; perhaps it takes a foreign eye to make new a well-trodden literary classic. The script by Moira Buffini is tight and makes few mistakes in the necessary contraction of the source novel’s plot. After some early Gothic-horror tension in the old house, poor Mrs Rochester makes only one brief appearance as the cliched mad-woman-in-the-attic, revealed after the brief, ‘non-wedding’ scene; Buffini is concerned with consequences more than action.

Don’t expect thunder-and-lightning explosions of emotion in this one; the layered, micro-performances are as muted and restrained as the delicate sound track. RC

Robin Catling gained degrees in both arts and technology which led to a diverse portfolio of employment. A freelance systems analyst, project manager and business change manager for the likes of American Express, British Airways and IBM, he moved on to web design, journalism and technical authoring. He has also worked in film and television, both behind and in front of the camera, including productions by Steven Spielberg, Martin Scorcese, Ron Howard and Ridley Scott. A qualified three-weapon coach, he runs West Devon Swords teaching sports fencing to all age groups, and in recent years qualified with the British Federation of Historical Swordplay to teach medieval and renaissance combat in the Historical Western Martial Arts.
View all posts by Robin Catling »
« Review: BBC Our World – Crossing Steinbeck’s America
Review: BBC World Service The Secret War On Terror »