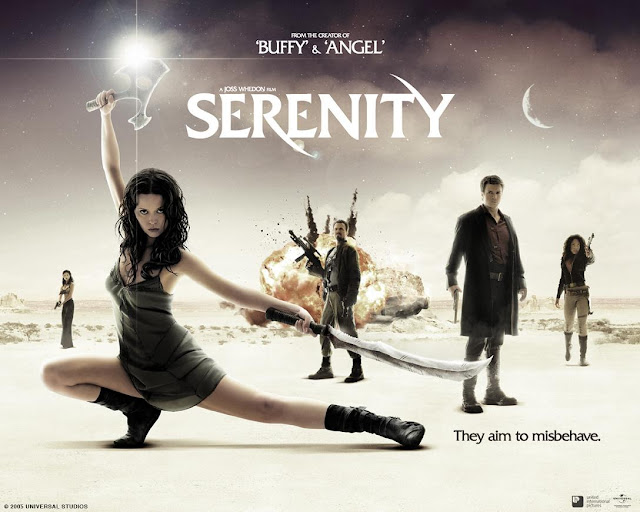 Five hundred years in the future, humanity has relocated from Earth-that-Was to a vast solar system of Earth-like planets and moons, under the military dictatorship of the Alliance. Defeated civil war veteran Captain Mal Reynolds evades the Alliance in his decrepit cargo ship, Serenity, until he picks up fugitives River and Simon Tamm and just can’t help but try to do the right thing, come cannibals, secret police, space battles and mutiny…

If you are a science fiction fan, what kind are you? Probably not the kind that prefers a sci-fi Western with homespun homilies and a Wild West frontier spirit; which is why Fox cancelled the original Firefly TV show after only eleven episodes. The cost-to-revenue numbers didn’t add up, which was a shame, since Firefly was crafted with a rare skill and care; flawed but sympathetic characters inhabited a rich universe of adventure and back-story, in plots which spanned genres from Alien-type suspense, Wild Wild West espionage, heist capers, through fugitive escapes. Horses galloped beneath a spaceship fly-past to the twang of banjos in the opening credits. It was an often uncomfortable mash up of genres,  pitched as Stagecoach in space; widely admired,  shunned by all but the hardcore fans.

None of which makes any difference if you didn’t see the show. So how does Serenity, the second feature from Buffy creator, writer and director Joss Whedon, work as a standalone movie?

Surprisingly well, despite the ongoing problem of a horse and space opera mash up for the majority of the audience, who view it as an oddity even amongst sci-fi. Whedon is the son and grandson of television writers, a natural small-screen auteur, story-telling with levity and wit.

Like Star Trek, which twice jumped from TV to cinema, Whedon has scaled up the show to fill a movie screen; some sequences work astonishingly well, some betray their TV roots. The returning cast fill their roles in depth even if you don’t know the back story. Mal Reynolds (Nathan Fillion – Buffy, Castle, Slither) is the steely frontiersman and rebel-without-a-plan. Elfin Summer Glau is the escaped psychic experiment River Tamm, all medically-induced psychosis, latent telepathy and a head full of stolen Alliance secrets. Reunited on Serenity, on the run from Chewetel Ejiofor’s Alliance ‘Operative’, Mal, River and the crew have to survive the Alliance and cannibalistic Reavers long enough to uncover the secret of the lost planet Miranda, bring down the Alliance and, well, do what a space captain’s gotta do.

Critics may say it’s a $40m B-movie, to fans this is much of its charm. There are some decent action sequences, crowned with a terrifying decent onto Miranda through the mayhem of a pitched space battle,
but its the characters and dialogue that hold this movie together. The script is full of Whedon’s trademark snappy lines brightening what would otherwise be a jamboree of borrowed plot lines rehashed from fifty years of TV and film. Whedon’s lightness of touch keeps the tone just the right side of tongue in cheek, so that when Mal gets serious, things get very dark. Scenes rattle along and rarely get bogged down, although there is a whiff of sentiment and a slightly ludicrous edge undercutting the movie’s grown-up ambitions. Mercifully it lacks the computer-game antics and bombast of bigger space operas, instead we get black comedy, spiky romance and action adventure with no aliens in sight.

Having failed to conquer the pop-culture universe with a branded space opera mythology, Whedon delivers a love-note to the fans which happens to be accessible pop-corn fare for everyone else and a respectable bit of sci-fi. If you can go with the cowboys in space idea, hitch a ride to worlds far, far way and have a good time. And yes, I do have the Firefly box-set. RC

Robin Catling gained degrees in both arts and technology which led to a diverse portfolio of employment. A freelance systems analyst, project manager and business change manager for the likes of American Express, British Airways and IBM, he moved on to web design, journalism and technical authoring. He has also worked in film and television, both behind and in front of the camera, including productions by Steven Spielberg, Martin Scorcese, Ron Howard and Ridley Scott. A qualified three-weapon coach, he runs West Devon Swords teaching sports fencing to all age groups, and in recent years qualified with the British Federation of Historical Swordplay to teach medieval and renaissance combat in the Historical Western Martial Arts.
View all posts by Robin Catling »
« Dubai Metro: A Technology Success
How-to: Seven Windows 7 Tips »