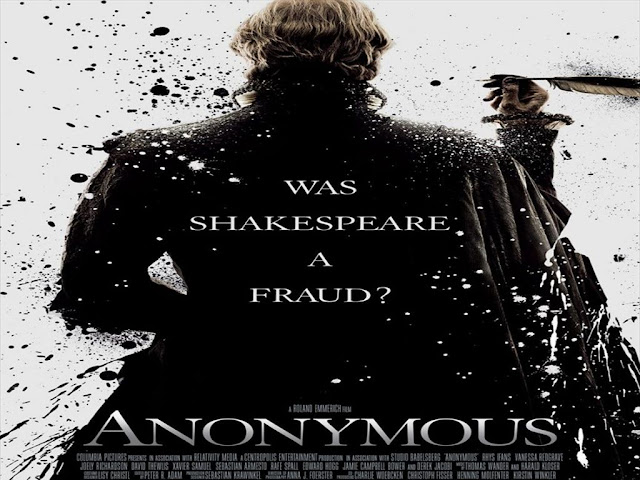 Roland Emmerich (yes, that Roland Emmerich) combines every Shakespearean conspiracy theory into this movie which posits that ‘William Shakespeare’ was the pen-name of one Edward De Vere, Earl of Oxford and that Wil Shakespeare of the Rose, Swan and Globe theatres was in fact an illiterate hack actor fronting for the aristocrat.

Anonymous wraps up the Shakespeare mystery in the intrigues and plots of the Elizabethan Tudor court over forty years, made precarious by Elizabeth’s lack of a successor and the rivalries of courtiers and aristocrats. Filled with vain-glorious, flawed characters from the monarch down, Emmerich delivers a costume-soap-opera that is itself vain-glorious and flawed in equal measure.

It is an uncomfortable truth oft ignored by literature scholars that the identified Wil Shakespeare was a minor hack actor, a humble grammar school boy who finished with the theatre and retired to a hick town in the English Midlands to end his days as a grain merchant. He left no books or papers in his will, no attributable unfinished works or drafts. Yet ‘he’ is rightly acknowledged as one of the literary giants.

Anonymous sets forth from the theatre-staged prologue by RSC luvvie Derek Jacobi, the dark path to the creation and concealment of Shakespeare and cuts straight to a delightfully muddy, grubby and filthy German recreation of Tudor London, aided with buckets of CGI.

In Gregory Ellwood’s review, “Roland Emmerich’s ‘Anonymous’ is just plain silly.” Of course it is! Roland Emmerich makes profoundly silly movies – Stargate, Independence Day, Day After Tomorrow, 10,000BC. I went in with low expectations and was pleasantly surprised. The script almost holds together despite some melodramatic moments, but no worse than BBC TV’s The Tudors or the respectable but still risible Stoppard-scripted Shakespeare in Love.

There are some stand-out performances. Rhys Ifans turns in one of his best since Vanity Fair as the Earl of Oxford, bullied and blackmailed by Queen’s Chamberlain William Cecil, the excellent David Thewlis now coming to his acting peak.

Oxford’s selected front-man is Ben Johnson, played by an assured Sebastian Armesto, who hesitates whilst talentless chancer Wil Shakespeare, another slimy turn from  Rafe Spall, jumps in to steal the credit. Inheritor Robert Cecil, played with hunchbacked malevolence by Edward Hogg, continues to hound Oxford and the playwrights to the end of Elizabeth’s reign.

Mother and daughter Vanessa Redgrave and Joely Richardson play the elder and younger Elizabeth, not such a Virgin Queen or talented stateswoman as the legend portrays. Vain, obstinate and autocratic in public; lonely and manipulated in private, sliding into dementia by the end, it is a very different performance from previous Elizabeths Glenda Jackson, Cate Blanchett or Judy Dench.

Emmerich and screen-writer Jon Orloff concoct a revisionist historical thriller wound around the Essex ‘revolt’ and several illegitimate heirs to the English throne, with the power of literature as propaganda much to the fore. Tudor England is a fascist police state, the artists are unwitting rebels and only late in life does Oxford attempt to strike at the ruling Cecil’s out of a lifetime grudge.

On-screen, the movie bats out of its’ league, looking about three times its’ budget. Attractively costumed, there is sadly an abundance of accurate, if absurd Elizabethan beards and hair; none more so than the Earl of Southampton’s ‘Captain Flasheart’ garb and wig from Blackadder. Sometimes the CGI fails badly, the dialog falls flat and few cliches of Elizabethan life are omitted.

The revelation of the vilest royal secrets is perhaps melodramatic, but so are King Lear and Oedipus Rex. In the litany of conspiracies and cover-ups, both the succession and the true identity of Shakespeare are lost to history. I am reminded that this small island nation was beleaguered and largely friendless throughout Elizabeth’s Golden Age. It was a Protestant police state where the penalty for sedition was arrest and torture, for treason was death. The theories will never be proved or disproved, so for now, however diverting is Emmerich’s tale, appreciate what remains, written by the hand of a genius: the works of Shakespeare. RC

Robin Catling gained degrees in both arts and technology which led to a diverse portfolio of employment. A freelance systems analyst, project manager and business change manager for the likes of American Express, British Airways and IBM, he moved on to web design, journalism and technical authoring. He has also worked in film and television, both behind and in front of the camera, including productions by Steven Spielberg, Martin Scorcese, Ron Howard and Ridley Scott. A qualified three-weapon coach, he runs West Devon Swords teaching sports fencing to all age groups, and in recent years qualified with the British Federation of Historical Swordplay to teach medieval and renaissance combat in the Historical Western Martial Arts.
View all posts by Robin Catling »
« How-to: Seven Windows 7 Tips
How-to: Add WordPress Custom Forms »