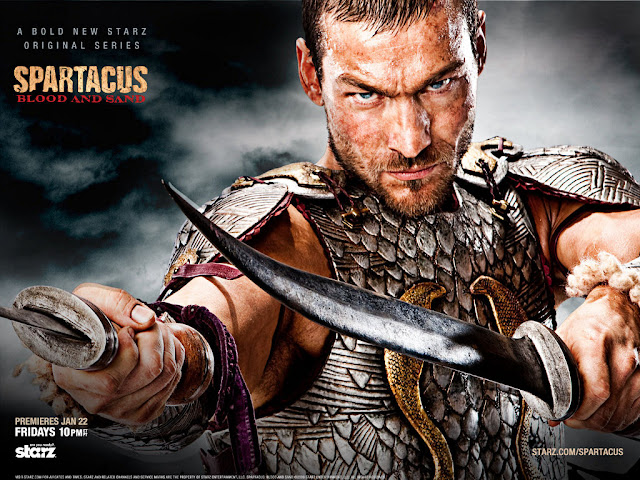 To cut to the chase, if you hated 300, then you will loathe Spartacus: Blood and Sand. A feast of bums and breasts, surrounding macho blokes with big pecs flying through the air in slow motion, to a background of atrocious CGI, studio sets rejected by Bonanza and an appalling wailing rock-guitar sound track.

Did I mention the blood? Buckets of it. A flowing tide of ketchup on every floor and squelching wet splatters of CGI claret in every fight scene, of which there are many; each one more ludicrous and yet more tedious than the last. All shot with a leery pornographer’s eye for gaping wounds and flying body parts.

The plotting aims high – I, Claudius, Gladiator – yet falls so far; Up Pompeii and Carry On Cleo. The dialogue is so appalling the producers insist on spicing it up with expletives every thirty seconds, intercut with a gratuitous bath scene, sex scene or some naked slave girls as distractions. The ghost of Bob Guccione’s Caligula walks across every frame.

Featuring a dull but charming lead in Andy Whitfield, scenery chewing performances from John Hannah (he used to be a respectable dramatic actor) and Lucy Lawless (Xena, Warrior Princess, so… no) the rest of the cast are muscled Kiwis, Maoris and Aussies with accents to match; all except the fine Roman ladies who are posh totty so British they sound like they’ve just left Cheltenham Ladies College en route to a gymkhana via Harrods in Knightsbridge. Parked the Chelsea Chariot outside Selfrdiges, have we, gels?

The busiest prosthetics and effects makeup team in TV just can’t keep up; honestly, so much to do, with scars, amputations, beheadings, slicings, stabbings and beatings; that’s probably why the bleeding stops about two seconds after the big CGI splatter and the boys just carry on regardless.

If you were hoping for the Wire with swords or The Sopranos with togas, forget it. When the roaring albino giant turns up in the arena, we’re somewhere in Space Hunter 3D territory, circa 1983. The difference between this and Stanley Kubrick’s equally silly 1960 Spartacus is that Kubrick was a genuine cinematic visionary. Blood and Sand is WWE with everything but the chair throwing. Actually there is some chair throwing in the second half of the season, the better half from episode six onward, where there’s some character development, albeit in a boo-hiss, pantomime fashion. Don’t get too dizzy on the merry-go-round of treachery, murder and sex or you’ll miss the revolting finale of episode 13. Really; the gladiators revolt, else it wouldn’t be Spartacus. Sadly, without a Scottish bloke shouting “gladiators, ready” and stopping them by blowing a whistle. Some spandex and giant cotton-bud fights along the sparkly travelator would have been an improvement.

Produced by Starz network, this aims to outdo HBO for sex, violence and swearing, yet the whole thing is such a hysterical mix of machismo and stylised comic-book graphics, it’s actually less convincing than old 1950’s sword-and-sandals epics with Robert Taylor and Richard Egan. It’s even less convincing than the dreaded 300 it tries so desperately to copy. I suggest we nail various writing Whedons, head writer Stephen De Knight, producers Tampert, Donen and Sam Raimi to crosses along the Apian Way, alongside 300’s Mike Mignola and Zak Snyder who inspired this nonsense. Don’t encourage them.

[Note: Andy Whitfield passed away on September 11, 2011 of lymphoma, so we’ll never know what his charisma and talent might have produced in other work. A sad early departure]

Robin Catling gained degrees in both arts and technology which led to a diverse portfolio of employment. A freelance systems analyst, project manager and business change manager for the likes of American Express, British Airways and IBM, he moved on to web design, journalism and technical authoring. He has also worked in film and television, both behind and in front of the camera, including productions by Steven Spielberg, Martin Scorcese, Ron Howard and Ridley Scott. A qualified three-weapon coach, he runs West Devon Swords teaching sports fencing to all age groups, and in recent years qualified with the British Federation of Historical Swordplay to teach medieval and renaissance combat in the Historical Western Martial Arts.
View all posts by Robin Catling »
« How-to: Private Cloud Computing for Business
Photography: Reuben Tabner »