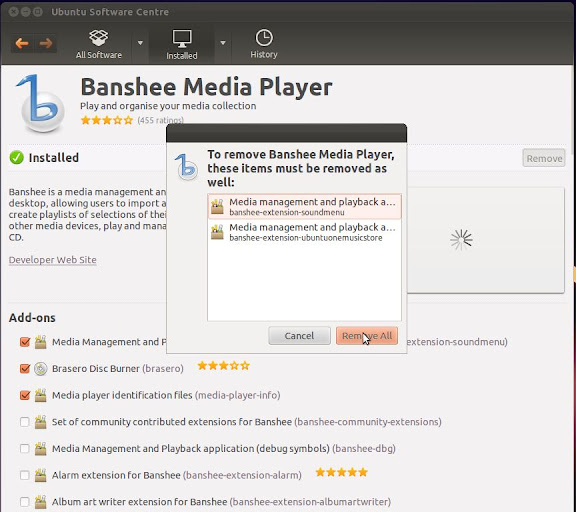 I tried. I did try. Truth is Banshee media player and I never did get on. Banshee’s searching and sorting never got into my head, simple though it is. I liked Banshee’s left pane listing of all media sources, really I did. It’s just everything on the right got piled up and was never customisable the way I wanted. I guess I never got over my ‘ex’: Rhythmbox.

That’s Banshee out. If you did a clean install of 11.10, Rhythmbox needs to be installed. If you upgraded, Rhythmbox should still be sitting unloved in a dark corner awaiting a return to the spotlight!

Yes, you can still run apt-get install rhythmbox in a terminal if that floats your boat.

To set Rhythmbox as your default audio player 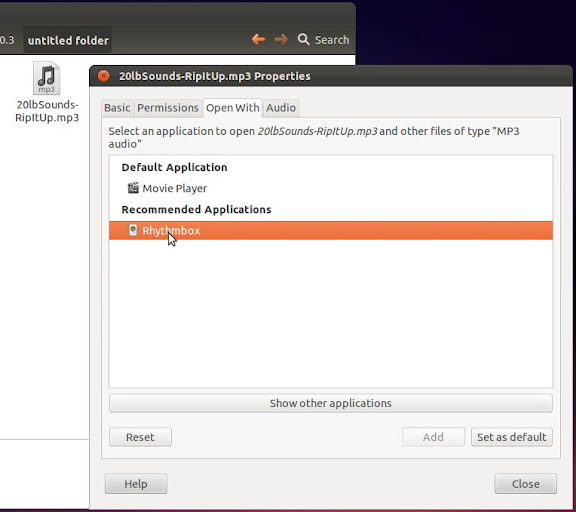 There is no more “Preferred Applications” in Ubuntu Oneiric. These settings are built into System Info managed by System Settings(Gnome Control Center). Kinda…

In Unity or Gnome-shell, you should be able to click on your User Account menu at the top-right corner and choose System Settings to launch gnome-control-center. Then scroll down and click on System Info, navigate to the Default Applications tab and then you change the default apps from the drop-down lists.

Except it doesn’t work.

Forget System Info – I’m not sure why it doesn’t work as advertised, it just doesn’t. You need to set defaults on the files themselves, once per file type.

You can do the old, reliable, manual way from your file manager.

Robin Catling gained degrees in both arts and technology which led to a diverse portfolio of employment. A freelance systems analyst, project manager and business change manager for the likes of American Express, British Airways and IBM, he moved on to web design, journalism and technical authoring. He has also worked in film and television, both behind and in front of the camera, including productions by Steven Spielberg, Martin Scorcese, Ron Howard and Ridley Scott. A qualified three-weapon coach, he runs West Devon Swords teaching sports fencing to all age groups, and in recent years qualified with the British Federation of Historical Swordplay to teach medieval and renaissance combat in the Historical Western Martial Arts.
View all posts by Robin Catling »
« Photography: Reuben Tabner
Photography: Jonathan Irwin »

6 thoughts on “How-to: replace Banshee with Rhythmbox on Ubuntu 11.10”