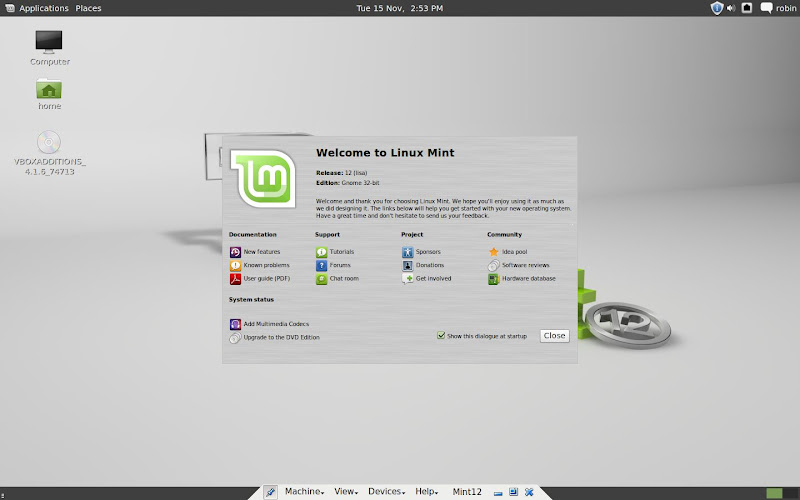 It’s that time already, as Clem and the team gear up to push the next version of Linux Mint through the gate, the rest of us wonder if Mint can maintain it’s momentum in gaining a larger share of the Linux user base. Mint has built a reputation as the alternative to Ubuntu, variously catching the defectors from Ubuntu Unity and at times even overtaking Ubuntu in the distro download charts. Given the fact that Mint is dependent on the upstream efforts of Debian, Gnome and Ubuntu, this release is going to be far from plain sailing.

Linux Mint 12 is based on Gnome 3.0 atop the Ubuntu 11.10 base. More on that shortly. As usual, I’ve got Mint in two configurations; in a virtual machine on VirtualBox and on physical hardware in the shape of the old Celeron test box with 1Gb memory and GeForce 440MX graphics card. 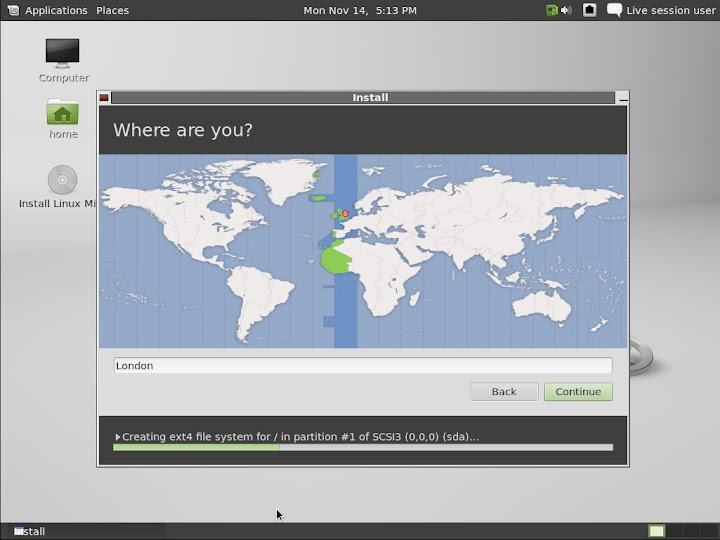 The graphical installer is the current standard for Debian/Ubuntu 11.10 and in normal operation hides everything that’s going on. Not that peering under the covers helped when the thing crashed on me three times on the Celeron. I think it has trouble with the collection of USB adapters, cards, ports and two elderly wireless adapters, one of which is PCI and the other a USB dongle, both based on RaLink chip-sets… yes, I know, glutton for punishment.

Gnome 3.0 ups the specification for graphics adapters. Neither the VirtualBox Guest Additions adapter nor the old GeForce AGP card can deliver 3D. Gnome 3.0 with the Mint extensions just hangs part way into populating the desktop.

If you can get 3D running, Mint relies on MSG or GCSE’s or some such; at least its not Gnome Shell or Unity. Actually, “MGSE” (Mint Gnome Shell Extensions) is a desktop layer on top of Gnome 3.0 that makes it possible for you to use Gnome 3.0 in a traditional way. You can disable all components within MGSE to get a pure Gnome 3.0 experience, or you can enable all of them to get a Gnome 3.0 desktop that is similar to what you’ve been using under 2.x. In the default configuration, you get Mint Menu but with a Gnome Shell/Unity style sidebar launcher panel within it. You can also access the Activities button to get the Gnome Shell panel launcher. That’s three ways to launch programs. Two of which don’t work for me on two different set-ups. This Gnome 3.0 with MSGE is already taking flak elsewhere as a ‘Frankenstein’ creation and ‘as big a piece of *rap as Unity.’ Harsh, chaps, truly harsh.

If you get the DVD edition or upgrade via the mint-meta-mate package (all 105Mb of it), you can get the MATE version of the faithful Mint Menu; it’s a fork of Gnome 2 which preserves compatibility with Gnome 3. To quote the Mint team, “MATE is brand new, it’s not completely stable yet, and it’s missing a few parts… Eventually, MATE will be in every way identical to Gnome 2 and represent the future of traditional desktops within Linux.” So far I’ve had it working once in six installs and even then MATE stopped working after a reboot, never to be seen again.

So MATE doesn’t work on either of my test boxes. Instead of the Mint Menu with sidebar, all I get is a conventional Windows-style start menu. All the fonts render abysmally. Go into the Appearance controls, under themes, and almost everything delcares “this theme will not look as intended because the required GKT+ theme engine [name] is not installed.” Even though all the referenced GTK+ theme engines ARE installed. It’s a mess.

The fall-back ‘Gnome Classic’ option provides a top panel with the application menu and notifiers with visible system tray icons, a bottom panel containing the window list and workspace switcher and retains the idea of a task-centric desktop, wherein you switch between windows, not applications. It’s all locked-down, non-configurable a la Gnome Shell/Unity, with no way to add items, or customise the panels.

For the current menu set-up, which is fairly sparse and not always logical, Mint dumps most of the control-type programs (everything not in System Settings) into the ‘Other’ category. When I say sparse, there are many things missing, presumably because they’ve not been engineered for Gnome 3.0 yet or left off the CD release to make space for all the Gnome 3.0 tat; for example, there is a User account tool, but no facility to maintain group permissions, you have to drop into a terminal session. That’ll go down well with the Mint user base.

Artistically, Linux Mint 12 uses a new theme called Mint-Z which is based on Mint-X and Zukitwo(??), the default background is the 3D Mint logo updated to version 12. The window controls and borders feature a frankly ugly look called Adwaito, which I can’t wait to get rid of. Depending on whether I run Gnome, Gnome Classic 2D or MATE, the desktop rendering of fonts is as ugly as sin, which is a big step backward given that Mint always looked stunning.

Interestingly, for a distro in search of a business model, the default search engine is  DuckDuckGo. Ethically, I like the look of this; it doesn’t show different results depending on who’s running the search, it doesn’t track or record user information, and it’s built on, and contributes, to Open Source software. It’s one of a small number of search engines which will share revenue generated by Linux Mint users with the Mint team to provide funding. Although you can easily switch search engines in Linux Mint 12, thanks to the clear instructions, you might want to stick with those that fund the distro.

For now, web browsers browse, media plays, documents can be written and even the USB wireless connection on the Celeron works fine after a couple of hiccups; I’m running it in preference to the PCI wireless card because the aerial on that one is a piece of junk that can’t pick up the attenuated signal in my building. I’m probably being unfair as even the thumping great Hawking antenna on my router barely penetrates the steel in my building.

And that, dear friends, is as far as we go with Mint 12 ‘Lisa’. The a stack of new and forked software isn’t working properly, so while I could upgrade to the DVD version to pull in the full release, I’m not sure it’s worht the bandwidth. This is a disruptive release, the whole thing a transitional step from Mint 11, in need of a lot of damage limitation. I hope they can get it fixed soon, I really do.

The Gnome Classic 2D desktop of Linux Mint 12 is stable and quicker than expected, but it can’t compensate for the fact that the overall release is drowning in all that desktop re-engineering. RC

Robin Catling gained degrees in both arts and technology which led to a diverse portfolio of employment. A freelance systems analyst, project manager and business change manager for the likes of American Express, British Airways and IBM, he moved on to web design, journalism and technical authoring. He has also worked in film and television, both behind and in front of the camera, including productions by Steven Spielberg, Martin Scorcese, Ron Howard and Ridley Scott. A qualified three-weapon coach, he runs West Devon Swords teaching sports fencing to all age groups, and in recent years qualified with the British Federation of Historical Swordplay to teach medieval and renaissance combat in the Historical Western Martial Arts.
View all posts by Robin Catling »
« Opinion: Where Next Chromebook?
News: Nook Versus Fire in Tablet Wars »