Review: Pirates of the Caribbean – On Stranger Tides 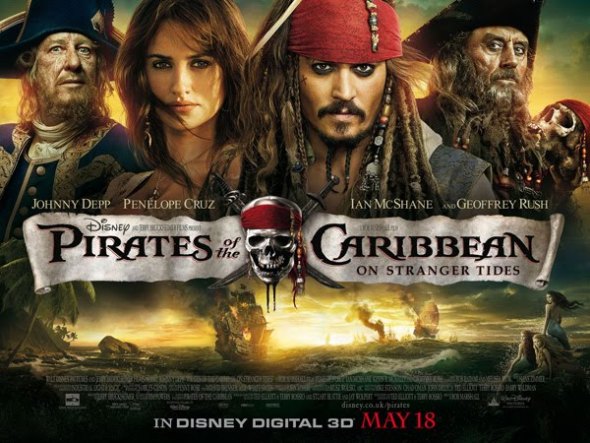 PotC has become the perfect example of milking a franchise until the last drop. Johnny Depp returns as Captain Jack Sparrow in an action-packed run-in with Angelica (Penélope Cruz), legendary pirate Blackbeard (Ian McShane), and some old tosh about the Fountain of Youth.

What is with the mixing of genres? PotC has this obsession with all the supernatural stuff. We have a series of Sinbad movies in eighteenth century costumes. Nobody does any proper pirating. Why can we not have a straight-up pirate romp with double-crosses and derring-do with some genuine peril in place of this cod-cartoon capering with desperate mugging to the camera? Last time it was Circe and Davy Jones, this time, it’s some clap-trap about the Fountain of Youth and mermaids.

The cast is clearly here to pick up the check on their way to better personal projects. Johnny Depp is morphing Jack Sparrow into David Bowie, despite having the real Keith Richards on hand to copy.

Penelope Cruz: yes, you! What are you doing in this? Sadly your genuine Spanish accent is now a pastich of Ramada in Hot Shots, but worse, your role as ‘pirate queen,’ however it was sold you, is merely another damsel in distress to be alternately threatened, rescued, abused, tricked and ultimately abandoned. Alongside the cannibal/vampire/slutty mermaids, the fundamental mysogeny of the Pirates Series is preserved.

Which is a shame, since we expected more of director Rob Marshall (Chicago). Nowhere near as camp as we’d feared, this lavish assembly of costumes and set-pieces remains as unengaging as it’s predecessors. We wanted The Crimson Pirate, The Scarlet Bucaneer, The Black Swan (1948, Tyrone Power, thank you), what we get is Aladdin without the songs. Or the jokes. The few good lines can’t make up for the emptiness of the whole 137 minutes.

There are whole hunks of superflous stuff here, chases, captures, escapes; an expedition by the  Catholic-fundamentalist kill-joys of the Spanish fleet; chasing chalices aboard Pons-de-Somebody-or-others’ wrecked ship; the entire sequence with King George (despite Richard Griffith’s masterful turn as a living, breathing Hogarth charicature).

As usual it’s the villains giving the best turns. Ian MacShane does villainy like no other, the most restrained performance of the whole show as Blackbeard – although why he has to be a voodoo high-priest with a remote-control cutlass to sail his ship crewed by zombies, I have no idea.

Geoffrey Rush is the only one who attacks his lines like he means them, Captain Barbosa the only character with any more depth than a puddle.

New to the franchise, it’s left to Sam Claflin (clergyman Philip) and Astrid Bergès-Frisbey (mermaid Syrena – Siren, get it?) to inject a bit of sweetness and emotion to the sad, soggy mess.

Sadder still, ‘PotC4: OST’ made another pot of money, so expect an even more bankrupt PotC5 in 2013. RC

Robin Catling gained degrees in both arts and technology which led to a diverse portfolio of employment. A freelance systems analyst, project manager and business change manager for the likes of American Express, British Airways and IBM, he moved on to web design, journalism and technical authoring. He has also worked in film and television, both behind and in front of the camera, including productions by Steven Spielberg, Martin Scorcese, Ron Howard and Ridley Scott. A qualified three-weapon coach, he runs West Devon Swords teaching sports fencing to all age groups, and in recent years qualified with the British Federation of Historical Swordplay to teach medieval and renaissance combat in the Historical Western Martial Arts.
View all posts by Robin Catling »
« How-to: Virtualise Everything
Review: Outriders BBC Radio 5 Live »

3 thoughts on “Review: Pirates of the Caribbean – On Stranger Tides”