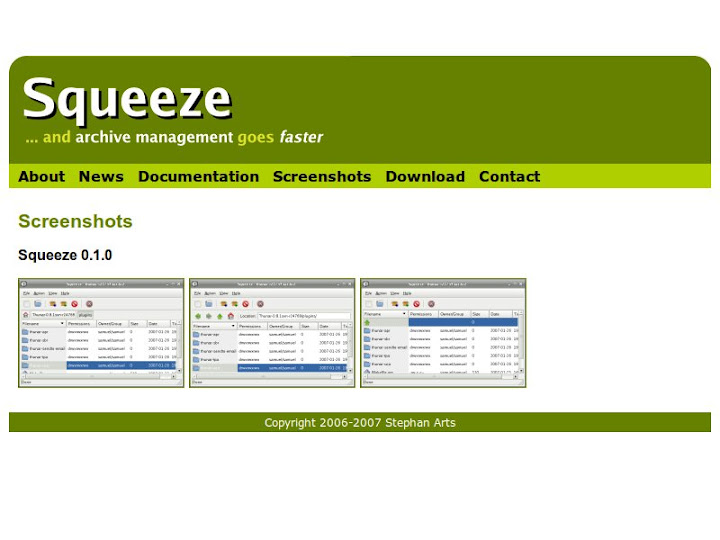 To quote Squeeze developer Stephan Arts, “Squeeze is a modern and advanced archive manager for the Xfce Desktop Environment. Its’ design adheres to the Xfce philosophy, which basically means Squeeze is designed to be both fast and easy to use.”

Currently version 0.2.3 is the latest release of Squeeze. That’s not a very advanced version number, reflecting the fact that Squeeze is indeed lightweight, and fast, at the cost of being functionally thin and undocumented.There really isn’t any user documentation. Or helpfiles. Engage brain, work it out yourself. The good news is Squeeze isn’t complicated, takes no time to work out; the menus will give you the key to the toolbar icons (all six of them; New, Open, Add, Extract, Delete, Cancel).

The Add dialog for selecting files and folders for your archive is a two part process.

That’s really all there is to it. It doesn’t strike me as any faster or slower than the equivalent File Roller archiving.

Roadmap
There is a roadmap for upcoming version 0.3, but no delivery date:

Download
You can get Squeeze through the Xfce software archives, as part of the Xfce4 software stack (by default in Xubuntu) or through the Ubuntu repos. RC

Robin Catling gained degrees in both arts and technology which led to a diverse portfolio of employment. A freelance systems analyst, project manager and business change manager for the likes of American Express, British Airways and IBM, he moved on to web design, journalism and technical authoring. He has also worked in film and television, both behind and in front of the camera, including productions by Steven Spielberg, Martin Scorcese, Ron Howard and Ridley Scott. A qualified three-weapon coach, he runs West Devon Swords teaching sports fencing to all age groups, and in recent years qualified with the British Federation of Historical Swordplay to teach medieval and renaissance combat in the Historical Western Martial Arts.
View all posts by Robin Catling »
« How-to: Using Accelerators in Internet Explorer
Photography: Astronomy Picture of the Day »

One thought on “Review: Squeeze Archive Manager for Xfce”