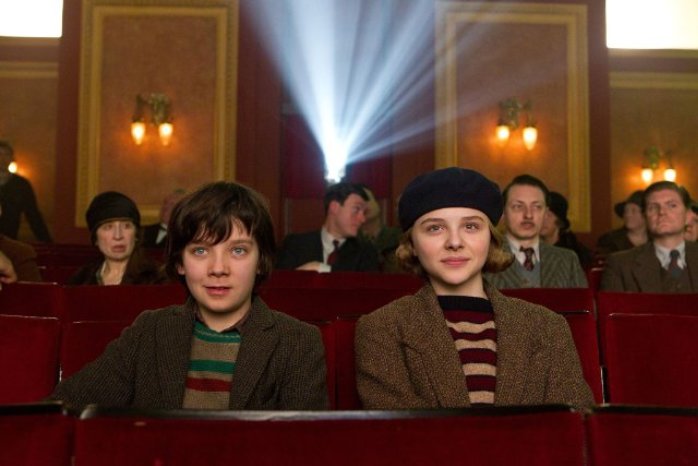 3-D, family-friendly kids’ adventure with a melancholy tone. It’s brilliant, but who is the intended audience?

Expanded from Brian Selznick’s illustrated children’s book The Invention of Hugo Cabret, Martin Scorcese pulls out an extraordinary diversion from his usual work, not seen since his 19th-century costume drama, The Age of Innocence. Only this time, it’s a film for his grand-kids, devoid of swearing and violence, but full of perils, aimed firmly at the intersect of child adventures and grown-up disillusion. Who cares if that intersect doesn’t exist, when it looks this good?

In a Harry Potter-ish, heightened, 3-D version of 1930’s Paris, orphan Hugo Cabret (Asa Butterfield) lives in the walls of a Paris Railway station, maintaining the clocks in place of his missing, drunken uncle (Ray Winstone), stealing to eat and stealing parts from the station toyshop to fix the automaton left behind by his father. With the toyshop owner’s grand-daughter Isabelle (the luminous star-to-be Chloe Moretz), Hugo’s three-fold adventure is to solve the riddle of the automaton, discover the real story of the toy seller (Sir Ben Kingsley) and stay out of the clutches of the Station Inspector (Sacha Baron-Cohen).

There are so many things to complement in this movie – the 3-D-ness is justifiable and it works, the 2-D just as glorious. The ridiculous amount of CGI recreating Paris mostly works; except, for me, any wide-shot including the Eifel Tower. The station set and the Paris suburbs are magnificent, including a Potter-esque graveyard with looming Gothic statues. The textures of the station concourse are matched by the mechanical detail of machine rooms, clocks and automata.

Individual sequences – the train crash, the chases of Hugo by the Inspector and his doberman, Hugo’s imagined transformation into the automaton – are superb. The action climax has Hugo dangling from the hand of the station clock, after Scorcese’s idol, Michael Powell’s classic, The Thirty-Nine Steps. It is one nod among many (and many a shot-for-shot reference).

For the performances, the two child leads are pitch perfect, the supporting players – Helen McCrory, Richard Griffiths, Frances De La Tour and Emily Mortimer, Michael Stuhlbarg – are all fine characters if a little thinly sketched. A frail but still imposing Christpher Lee makes a fleeting appearance as the benevolent book-shop-owner and Hugo’s guide. As Gustav, the awkard buffoon of a Station Inspector, Baron-Cohen does a fine job with a difficult character, all the while channeling Inspector Clousseau and Peter Cook. At his best with the physical clowning, Baron-Cohen’s comedy-improv dialog is likely to lose most of the kids and some of the adults. Gustav earns some sympathy in some revealing moments.

Full honours, however, must go to Sir Ben Kingsley as ‘Papa George,’ the stern toyshop owner with a secret past. As more of his pain is revealed, this becomes one of his best performances in years. Award nominations must surely follow.

And so there are no villains in this movie, only, as Hugo observes, broken people, in the broken machine of the world. As Hugo fixes clocks and toys and the automaton, we hope he can also fix the broken people. It is a big theme for a kids film to take on, which begs the question what kind of movie is it? Selznick’s book was a kids’ adventure mystery, with an unusual hook into early cinema. This is the strand that Scorcese expands into a central theme that threatens to overwhelm the main plot. Taking George Melies’ early movies and a huge chunk of classic cinema up to the 1940’s, this  is Scorcese’s rhapsody and homage to the cinema pioneers.

This is where, as an ordinary punter, I have reservations. The adventure stops for a cinema history lesson mid-way, the focus entirely on Papa George, the technology of early film, a recreation of the earliest movies and some of the horror of World War One (alluded to, at least). This is where Scorcese’s heart is. In between the breathless excitement of chases and escapes, Hugo’s story becomes as mournful and melancholy as Kingley’s. The various threads sit unevenly in pace and tone. Scorcese doesn’t seem to connect with kids the same way as Tim Burton or Spielberg or David Yates; it all comes back to the disillusion, anger and regret of the adults. At least every one gets a shot at redemption, including 12-year old Hugo, burdened with adult worries and care-worn beyond his years. Oddly our climax is not that redemptive moment, but another cine history celebration for the cineasts. You really wonder if the kids will still be with it when ‘their’ ending is already done.

If you are one of those cineasts, you will love this glittering jewel of a movie. A great deal of love and care went into every frame, in every discipline. You will forgive the slightly surreal fantasy twists and the simplistic jumps and coincidences of the plot. You will admire Scorcese for wearing his considerable heart on his sleeve. You will applaud Kingley and Butterfield for their mesmerising performances. You will love it. RC

[In the interests of full disclosure, Robin Catling worked on the production of Hugo for six months in 2010]

Robin Catling gained degrees in both arts and technology which led to a diverse portfolio of employment. A freelance systems analyst, project manager and business change manager for the likes of American Express, British Airways and IBM, he moved on to web design, journalism and technical authoring. He has also worked in film and television, both behind and in front of the camera, including productions by Steven Spielberg, Martin Scorcese, Ron Howard and Ridley Scott. A qualified three-weapon coach, he runs West Devon Swords teaching sports fencing to all age groups, and in recent years qualified with the British Federation of Historical Swordplay to teach medieval and renaissance combat in the Historical Western Martial Arts.
View all posts by Robin Catling »
« How-to: Windows Media Player 11 without WGA
Review: Masdar City Personal Rapid Transit »