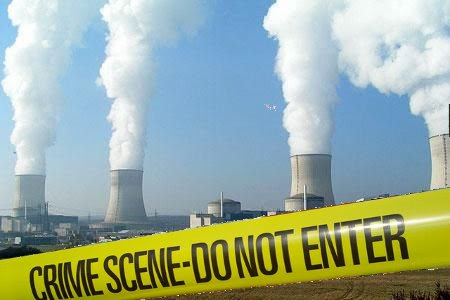 “Who’s paying you? It’s the French isn’t it? I can smell the garlic!”
(Michael Caine, Water)

Plus ca change… “a French court has fined energy giant EDF 1.5 million euros (£1.3 million) and sent two of its staff to jail for spying on Greenpeace campaigners.”

EDF employed security firm Kargus to spy on Greenpeace as it campaigned against new reactors in France, sending two Kargus employees to jail and awarding Greenpeace 500,000 Euros (£428,000) in damages. Greenpeace currently opposes new European Pressurised Water Reactors (EPRs) that EDF hopes to bring to the UK. Adelaide Colin, communications director for Greenpeace in France, said the decision “sends a strong signal to the nuclear industry: no-one is above the law”.

In 2006 Kargus Consultants, then run by ‘a former member of the French foreign secret service,’ compiled a dossier on Greenpeace including material hacked from a campaign head’s computer.

“EDF maintained that it had just asked Kargus to monitor the activists, and that the consultants had exceeded their remit.”

EDF is French-government owned. This operation recalls the sinking of Greenpeace ship Rainbow Warrior in New Zealand in 1985 by French foreign intelligence service personnel, who mined and sank the Greenpeace vessel to prevent it interfering with nuclear testing in the Pacific.

At least this time, the French state didn’t blow anything up, although it does seem like certain elements are prepared to go to any lengths, including breaking the law, in order to defeat environmentalist opposition.

Allan J. Smithie is a journalist and commentator based in Dubai.
View all posts by Allan J. Smithie »
« Full Circle Podcast Episode 27 You Can’t Buy this Kind of Entertainment
Review: Sherlock, BBC TV »

2 thoughts on “News: EDF Staff Jailed for Spying on Greenpeace”