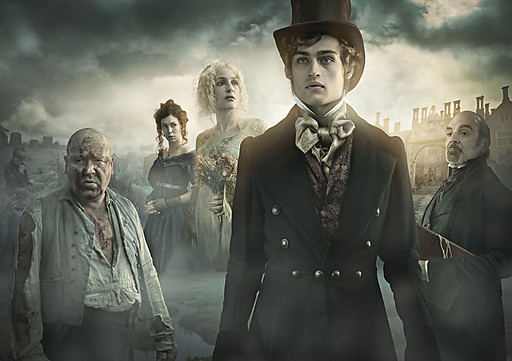 Lavish adaptation of the classic Charles Dickens novel in which orphan Pip becomes a gentleman when his life is transformed by a mystery benefactor.

British TV has a Christmas tradtion of saving the Crown Jewels for the end of the year and what is more ‘Christmassy’ than a big slice of Charles Dickens with all the trimmings?

This latest TV adaptation of Great Expectations (close on the 10-yearly re-working) firmly took on the challenge of a three-hour short-hand version with mixed results.

Colour-graded to within an inch of its’ life, this was Bleak Expectations injected with Dostoevskey, in a palette of muted green, grey, green-grey, grey-green and occasionally varied with black. The mud and the filth, however didn’t stick to the cast.

While Young Pip wasn’t nearly poor and down-trodden enough, the absurdly pretty older Pip (Douglas Booth) came straight from a Gaultier ad, entirely avoiding his apprenticeship at the forge. Booth made a decent stab at nouveau-riche snobbery and pride, before finally taking charge of his life, still made a hash of it and everyone got their happy ending courtesy of a horse.

All except Miss Havisham played by Gillian Anderson, previously excellent as Lady Dedlock in Bleak House, who entered as a fey, ethereal and clearly bonkers Miss Haversham (Compeyson ran from the altar because she was crackers!). Reading from the sing-song book of telly insanity while staring into middle-distance, it was a very 1940’s performance up to the obvious suicide, gruesomely going up in flames.

Abel Magwitch also ended badly, a shame since Ray Winstone proved from his first to last frame that he’s still ‘the Daddy.’ David Suchet injected some redeeming passion into the lawyer Jaggers. Tom Burke provided the real villainy as scoundrel Bentley Drummel, but while his prostitutes made it on-screen, his death did not.

Sadly former Eastenders writer Sarah Phelps reduced all the dialogue to working-class domestic and cut the Dickens dialog to ribbons. Consequently Vanessa Kirby as Estella got little to say or do except look pretty and bewildered (pretty bewildered where her lines had gone, presumably). As Miss Havisham’s ‘blade’, her revenge on men, Estella had no spite and no venom and almost no colour at all.

A bold, not bad, adaptation with some strange choices of compression and contraction, the last episode a headlong rush, so not quite a classic.

Expect another film adaptation in 2012 (part funded by the BBC) with Mike Newell directing and Helena Bonham Carter as Miss Havisham and Warhorse wonder-boy Jeremy Irvine as Pip. SC

Sue Corsten is a film and TV make-up artist based in the UK.
View all posts by Sue Corsten »
« Humour
Peggy Noonan On Steve Jobs And Why Big Companies Die »