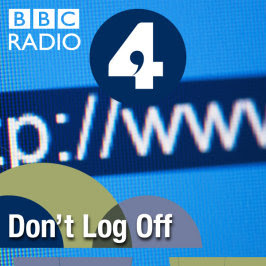 Don’t Log Off, BBC Radio 4
“Alan Dein discovers the real life stories behind on-line profiles via Facebook and Skype. Alan locks himself away for a week to talk to people on the Internet. He starts with nothing, just an on-line profile which says ‘talk to me’. The results are intriguing, funny and often very moving.”

Asked to review this, I almost said no;  Dein crosses continents and time-zones to engage new Internet ‘friends’ on Skype and by telephone. Previously, Dein presented Don’t Hang Up, in which he called public phone boxes around the world to see who picked up.

This programme didn’t do anything to change the view of the Internet as a home for the sad, the lonely, the isolated and counter to the objective, the disconnected. It didn’t move me much further than to depress me.
The men fared badly – a self-contradictory Egyptian whose online romance with an American girl failed; the deluded Australian sent packing after a trip to England resulted in a concealed pregrancy, a quiet Pakistani gentleman yearning for a girl from the wrong caste.

Thrown in amongst them was the ordinary Chinese girl who Skyped on her laptop after curfew, only to disappear off the line right at the point of discussing the Chinese ban on Facebook; low battery or something else, we didn’t find out.

Lowest on life’s scoreboard was the snowbound single parent in Nova Scotia; three kids by three different fathers – one about to leave jail, 5,000 Facebook friends but no actual friends to speak of and no wish for any. She keeps the world at arms length, moving periodically the length and breadth of Nova Scotia to get away from her fellow ‘two-faced’ Canadians. Jaded at the age of 27, her kids and on-line friends were her life and she seemed especially joyless in it.

As thumbnail sketches, we got only snippets of these peoples lives, single aspects which certainly don’t present the whole person. There’s a problem with the whole private/public personas of these people on the Internet to begin with. Since Dein rightly announced himself as BBC from the start of these contacts, it’s a flawed approach, not helped by the presentation.

This was a random show, with random people linked by Dein’s stolid, monotone Northern-England drone, enough by itself to drive you to tranquilisers, before you even get to the depressing picture of all these lonely people on the web. I’m afraid I won’t be logging on for that. SC

The second programme engages those dreaming of freedom; a man car-jacked in Caracas and an Iranian evading the electronic eavesdropping of the authorities.

Sue Corsten is a film and TV make-up artist based in the UK.
View all posts by Sue Corsten »
« Cat Talking Translation (YouTube)
News: 25 Worst Passwords of 2011 »

One thought on “Review: Don’t Log Off, BBC Radio 4”