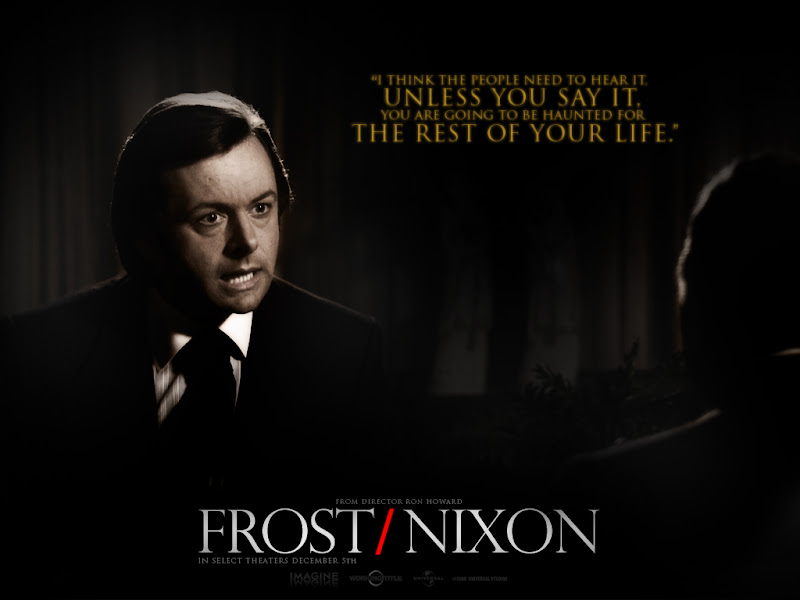 The difficulty always with adaptions of historical events for mass market Hollywood appeal lies in what history is kept and what is sacrificed for the drama. The premise is sound; take two men at a crossroads in their lives, re-create the events that finally broke one and elevated the other.

I remember the Frost/Nixon interviews and however good the movie, it is not the history I recall.

The ageing and unwell Nixon had kept silent after resigning from office over the Watergate scandal three years earlier, but with an eye to a media fortune and the rehabilitation of his reputation, agreed to be interviewed by ‘soft-touch’ talk show host Frost. Keen to elevate his reputation and finally break America, Frost put all his own money into the Nixon interviews with little sponsorship and no TV network support.

In trying to open out the play for the screen, we have to go beyond the simple two-hander played out by Sheen and Langella on stage. Sam Rockwell, Oliver Platt, Kevin Bacon and Rebbecca Hall all make fine contributions as ‘interviewees’ inter-cut with the action, but it’s a device too far, a clumsy way of shoe-horning in extra narrative detail that detracts from, instead of adding to our understanding of the two leads. The film hangs on them and is only barely alive when they are on-screen together.

The late night drunken call by Nixon to Frost, though true, doesn’t work as a dramatic scene, as it’s a Nixon dramatic monologue with Frost as a silent witness. Unfortunately this is what you realise with much of Morgan’s stage dialogue. Despite writing hit films The Queen and The Last King of Scotland, this one simply doesn’t strike the right tone.

There are repeated battle and war metaphors (heightened by Hans Zimmer’s’ dramatic score belonging to a different movie), but no real battle until the night before the final interview and Nixon’s confession. By then you realise neither man is a particularly accurate portrayal.

Our two leads are far too charismatic as actors to portray the real men. Make no mistake, both Michael Sheen and Frank Langella deliver marvellous impressions of the protagonists, but far from impersonations and it is this, more than Morgan’s flawed script, which sinks the film. This has the two men completely in reverse.

David Frost was a successful broadcaster from the sixties satire show That Was the Week That Was. What made that show a hit was his sharp-eyed, keen intelligence, not the nervous, twitchy, mannered buffoon that Sheen delivers. Richard ‘Tricky Dicky’ Nixon was not born of a television age, was no media superstar; his shifty, uncomfortable presence in public was the inverse of his low-politics brawling behind the scenes. Langella’s Nixon is far too dignified, with too much gravitas to reflect the dirty campaigner and most vilified US president in history. His verdict on the legality of Watergate sounds practised and hollow; his confession actually missing the poignancy of the real Nixon interview.

Far from the soft-touch interviewer, Nixon failed roll over Frost at any point in life. It seems Morgan was under instruction to write a sports movie, a ‘Rocky’ scenario; so Frost becomes the under-dog out to KO the invincible heavy-weight champ. So we get the pre-match team squabbles with Platt, Rockwell and Matthew McFayden’s inexplicably tall and dashing presence as the short, nerdy John Birt. Suddenly it’s a football movie with Sheen as the under-dog manager trailing at half-time. Then comes the eleventh hour break-through, wading through the Watergate files for the denouement and the knock-out punch. Ron Howard does a workman-like job with this material but the entertainment is all surface gloss. The history is far more compelling. RC

Robin Catling gained degrees in both arts and technology which led to a diverse portfolio of employment. A freelance systems analyst, project manager and business change manager for the likes of American Express, British Airways and IBM, he moved on to web design, journalism and technical authoring. He has also worked in film and television, both behind and in front of the camera, including productions by Steven Spielberg, Martin Scorcese, Ron Howard and Ridley Scott. A qualified three-weapon coach, he runs West Devon Swords teaching sports fencing to all age groups, and in recent years qualified with the British Federation of Historical Swordplay to teach medieval and renaissance combat in the Historical Western Martial Arts.
View all posts by Robin Catling »
« How-to: Restore and Refurbish Windows Vista
How-to: Choose an Anti-Virus Program »