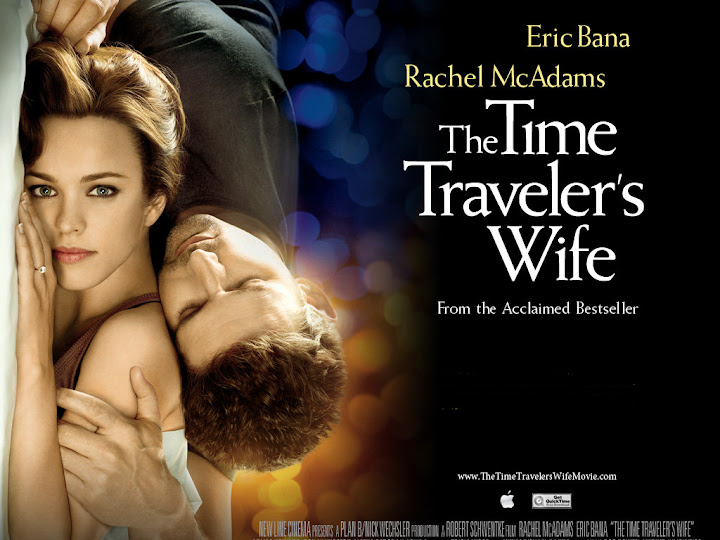 Six year old Henry escapes the car accident that kills his mother by time-travelling. So begins a life-long condition which is fortunately never explained, but enables a slightly muddled drama touching on destiny, fate and some big what-if questions.

Henry’s condition is so random, he appears and reappears in times and places of personal significance – hence meeting wife-to-be Clare from age six onward – meets people and learns things out of sequence. His first meeting with Clare as a twenty-something who loved him from age six creates the causal loop that sends him back to her as a child. Confused? You should be, even Henry gets confused. Worse still, it is a dangerous condition that drops him naked into often hostile environments.
Adapted from the best-selling romance by Audrey Niffenegger, despite the title, it’s about Henry (thinking girl’s totty Eric Bana) and not his wife (thinking man’s totty Rachel McAdams). The wife Clare is frequently sidelined as we try to follow Henry’s frequent but irregular jaunts through time and space.

While it is a fascinating premise, the issue is the compression of the novel, which is too much for the movie. With the contraction or loss of episodes and characters, the effect is fractured and disjointed. Now this may reflect effect of time travel on Henry and the characters lives but makes it harder for us the audience.

It is well within the actor’s range; Bana played ‘sexy, sensitive and saddled with inconvenient superpowers’ in ‘Hulk’ while McAdams figured out The Notebook. The supporting characters do well with little more than sketch time to make an impression.

We get little flashes of brilliance here and there. Henry allows himself one modest win on the lottery to keep Clare in the style to which she’s accustomed. He misses his wedding on the day, but goes back with grey hair to complete the ceremony. Clare takes advantage of an earlier Henry to get her way after one of his unilateral decisions. Henry meeting another time-traveller is a joy of a scene; the last one in the movie, actually, as impending tragedy and a prize weepie ending approach at speed. Tragedy it must be, as cause and effect cannot be separated or altered by time travel, fore-knowledge is a curse and fate is a certainty. But there are also opportunities; Henry meets his mother on the subway in a brilliantly touching and under-played scene.

Less daft than Benjamin Button, The Notebook, The Lake House, Message in a Bottle, Butterfly Effect (and yes, Time Cop), this one stands up better than all those together. There’s mystery, suspense, romance, comedy and tragedy. If you don’t get it first time around, just time-travel back to the beginning. RC

Robin Catling gained degrees in both arts and technology which led to a diverse portfolio of employment. A freelance systems analyst, project manager and business change manager for the likes of American Express, British Airways and IBM, he moved on to web design, journalism and technical authoring. He has also worked in film and television, both behind and in front of the camera, including productions by Steven Spielberg, Martin Scorcese, Ron Howard and Ridley Scott. A qualified three-weapon coach, he runs West Devon Swords teaching sports fencing to all age groups, and in recent years qualified with the British Federation of Historical Swordplay to teach medieval and renaissance combat in the Historical Western Martial Arts.
View all posts by Robin Catling »
« News: BBC Click on Internet Banking Fraud
Valentine’s Caution »