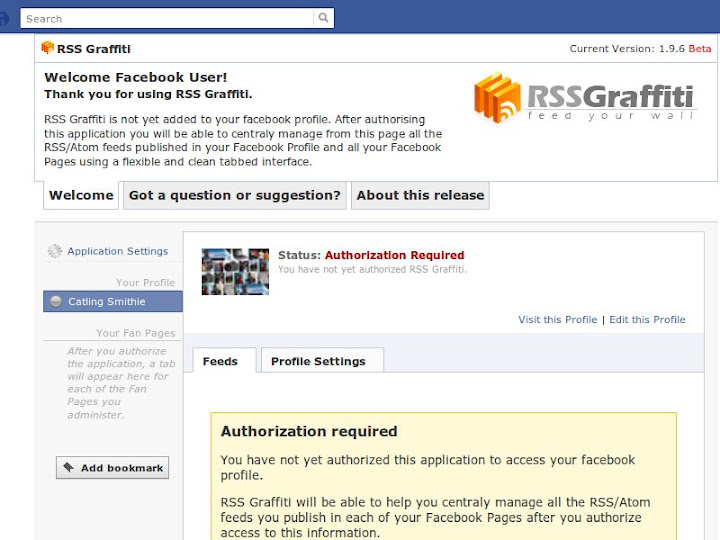 The WordPress plugin for Facebook isn’t working for us; we don’t know why, we can reset every day but it stops feeding soon after.

So rather than push from WordPress to our Facebook page, we’ve opted to pull posts via the existing WordPress RSS feed using a successful Facebook app called RSS Graffiti. There are many RSS applications to auto-publish your blog’s content, but RSS Graffiti is one of the top apps for this. It can centrally manage all the RSS/Atom feeds you publish in each of your Facebook Pages. 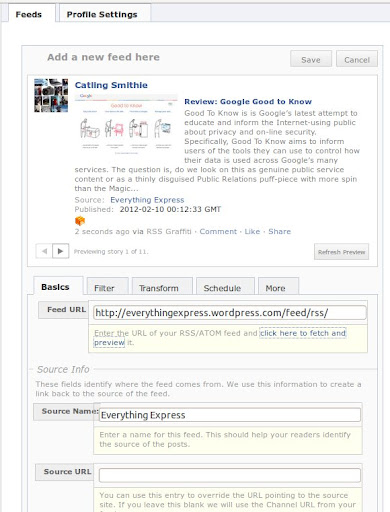 Among the RSS Graffiti options;

In order to configure RSS Graffiti:

The setup page is simple to step-through for each feed;

There are other tabs to refine the settings for each feed;

RSS Grafitti is one of the new generation of Facebook apps which makes interconnecting all your publishing and social media platforms every easy. RC

Robin Catling gained degrees in both arts and technology which led to a diverse portfolio of employment. A freelance systems analyst, project manager and business change manager for the likes of American Express, British Airways and IBM, he moved on to web design, journalism and technical authoring. He has also worked in film and television, both behind and in front of the camera, including productions by Steven Spielberg, Martin Scorcese, Ron Howard and Ridley Scott. A qualified three-weapon coach, he runs West Devon Swords teaching sports fencing to all age groups, and in recent years qualified with the British Federation of Historical Swordplay to teach medieval and renaissance combat in the Historical Western Martial Arts.
View all posts by Robin Catling »
« Opinion: More Flash Not Less?
Full Circle Magazine no 58 Out Now »