Review: My Week with Marilyn 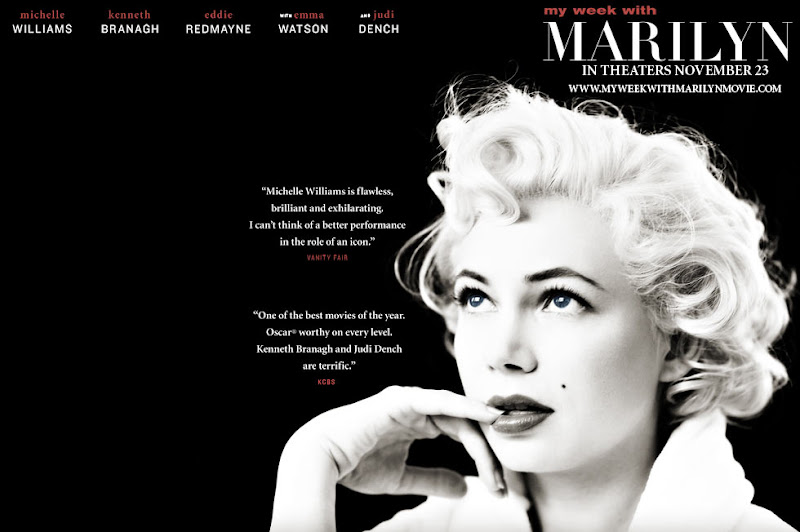 Summer 1956: privileged Oxford graduate Colin Clark (Eddie Redmayne) decides to make a career in the film industry and goes begging for a job with Laurence Olivier’s production company, only to find himself as third assistant director on The Prince and the Showgirl. Then Olivier’s co-star arrives; the most famous actress in the world, the insecure, damaged Marilyn Monroe (Michelle Williams).

Still doing the rounds and adapted from the real Clark’s memoir of the same name, what we have here is a thoroughly British period movie, a condensed snapshot in place of a ‘bio-pic’ of a movie icon wooed by the under-dog, fish-out-of-water, upper-class twit, ex-public schoolboy. The assembled Brits buoy up Williams central performance and there’s much to admire, if only it didn’t tick so many boxes so blatantly.

Branagh as Olivier, for example, captures the Great Man’s ego, diction, warmth and irascibility, his own insecurity as the ageing theatre star. Much comedy is derived from the total clash of acting styles of old stage star Olivier and Monroe’s ‘method,’nurtured by Zoe Wannamaker’s acting coach Paula Strasberg. Branagh brings enough wit and charm to off-set Olivier’s pompous camp theatricality. Faithful Dame Judy Dench mediates as another theatrical Dame, Cybil Thorndyke – they are nothing like each other.

Michelle Williams does a great job of looking like Monroe and completes the check list of poses, mannerisms and expressions. What she doesn’t get (which is why Monroe herself remains such an icon) is that undefinable charisma of an star who at times could barely act, sign or dance, but remains the world’s sexiest star. We get the drink and the pills, and the insecurity of a woman who wants to be taken seriously as an actress. We get hints of the abandonment issues of the former Norma Jean Baker from small-town America and the desperate longing to be loved, if only as a movie star, a life she can’t give up, no matter how much misery it brings. Her mother’s mental breakdown is sidelined in case we mistakenly think Marilyn was mad (probably not, just desperately unhappy). Ironic, then, that she gets Marilyn’s line when facing her admirers “shall I be her?” Almost, Michelle, almost. If you were playing an entirely fictional character, the awards would have rained down like confetti.

The vacuum in the centre of the movie is the character of Clark. There are many references to Eddie Redmayne’s Clark as a ‘boy’ but not to his sexuality, which is why we presume there’s no sex with Marilyn (or with Emma Watson’s wardrobe girl). There are too many lingering shots on Redmayne’s wide-eyed freckled face, out of his league and out of his depth. He’s there as a cypher, we’re voyeurs over his shoulder as he pulls back the curtain revealing what’s behind the movie glamour. There’s a suspicion that Clark himself is an unreliable guide, selective or deluded about what happened and further filtered by the screen-writing.

Otherwise this is a lightweight confection; tick the boxes for a bit of English scenery, Windsor Castle, Eton College, Bond Street; there are some well-written, sparkling dialogue scenes and episodes from Monroe’s continual melodrama of a life and it looks period down to the old studio equipment. Ultimately the dramatic structure and the clichés weigh too heavily for the movie to carry. RC

Robin Catling gained degrees in both arts and technology which led to a diverse portfolio of employment. A freelance systems analyst, project manager and business change manager for the likes of American Express, British Airways and IBM, he moved on to web design, journalism and technical authoring. He has also worked in film and television, both behind and in front of the camera, including productions by Steven Spielberg, Martin Scorcese, Ron Howard and Ridley Scott. A qualified three-weapon coach, he runs West Devon Swords teaching sports fencing to all age groups, and in recent years qualified with the British Federation of Historical Swordplay to teach medieval and renaissance combat in the Historical Western Martial Arts.
View all posts by Robin Catling »
« How-to: Discover MAC Address on Linux
Social Media Headache »

7 thoughts on “Review: My Week with Marilyn”