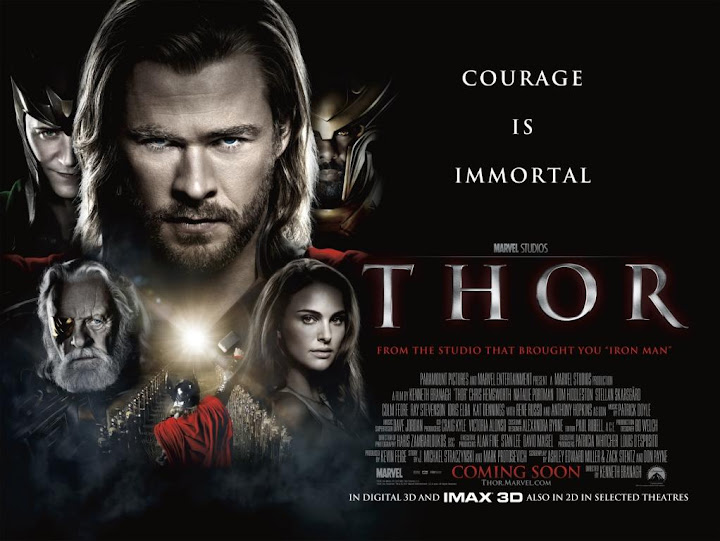 All of Marvel Comics’ ancient mythology titles (Thor, Hercules, Submariner) are camp classics that bode ill for movie adaptations. It takes class and material with depth to pull off a comic-book movie, which is why so few work – Nolan’s Batman, the Blade series and errr… the rest are mostly risible.

You can probably tell this uncompromisingly silly stuff won me over for sheer bravura.

With a production design any Wagner Ring Cycle would kill for, Thor is an impressive CGI-fest of galaxies, worm-holes, Juttenheim and Asgard, flying gods, a fire-breathing armoured Destroyer and a horde of Frost Giants. Ever more extravagant costumes meld Dragon-Con with cos-play night at Studio 54.

Plundering the Norse source material with conflict aplenty built right in (the story developed by sci-fi scion J. Michael Strazinsky), Branagh delivers an epic of Wagnerian scale. This is Thor as family drama, with more than a touch of soap opera – Branagh directs real operas and it pays off here. The opening clunks a little between the present day and shoehorning in a huge chunk of backstory; after that, Branagh varies the pace enough to give light and shade to what could have been one long over-the-top demolition derby (Transformers and ‘McG’ take note).

The likeable Hemsworth carries you through the silliness of the script, ably aided by Stellan Skarsgaard’s conveniently Scandinavian physicist, Idris Elba (Hemdal the Guardian) and the excellent Tom Hiddleston, whose version of Loki ‘the Trickster’ stays credible to the end. Which is more than can be said of Thor’s frat-pack of Asgardian warriors (including token girl Jaime Alexander), or of Natalie Portman’s scientist Jane Foster; I don’t think poor Portman had any idea how to bounce back from the loopy Black Swan or the execrable Your Highness. Sir Anthony Hopkins makes an imposing Odin, the All-father king of the gods, although it seems Hopkins hasn’t believed in the business of acting since Silence of the Lambs. My favourite, Rene Russo plays Frigga and ever reliable Colm Feore is unrecognisable as Laufey, king of the Frost Giants.

What is getting irritating is the plot-laying by the studio for the upcoming Marvel Avengers movie, so we get the SHIELD Agents trying and failing to make the US government look like the good guys.

It’s a thrilling mash-up of comic books, cod-mythology, action, humour and mild peril with no real blood. Branagh has ducked out of Thor II, which is a shame; I think I’ll covet this one for a while. RC

Robin Catling gained degrees in both arts and technology which led to a diverse portfolio of employment. A freelance systems analyst, project manager and business change manager for the likes of American Express, British Airways and IBM, he moved on to web design, journalism and technical authoring. He has also worked in film and television, both behind and in front of the camera, including productions by Steven Spielberg, Martin Scorcese, Ron Howard and Ridley Scott. A qualified three-weapon coach, he runs West Devon Swords teaching sports fencing to all age groups, and in recent years qualified with the British Federation of Historical Swordplay to teach medieval and renaissance combat in the Historical Western Martial Arts.
View all posts by Robin Catling »
« Review: The Lady of the Rivers – Philippa Gregory
Review: Once Upon a Time »