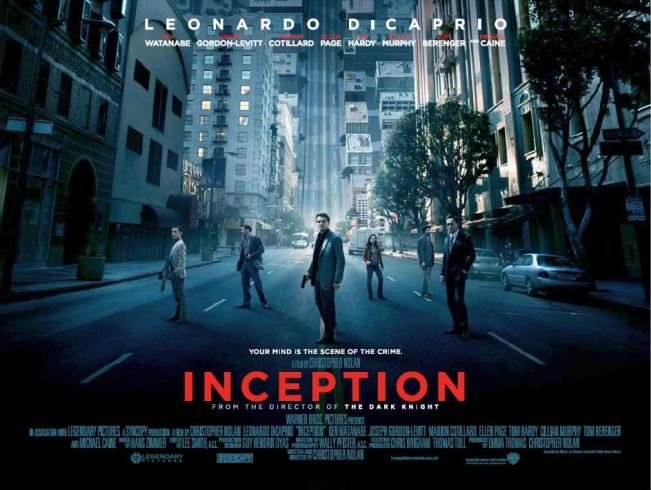 The mind is a complex place, especially the subconscious mind. Making a film about it is complex enough, and it’s complex to watch. Inception is challenging and self-consciously outstanding. I was hooked from beginning to the end.

Dom Cobb (Leonardo di Caprio) is not your average thief. He enters people’s dreams and steals secrets for a living. On meeting Saito (Ken Watanabe), a Japanese businessman, he is faced with a new challenge. Can he enter someone’s dream and plant an idea? And not just someone – Robert Fischer (Cillian Murphy), the son of a dying business magnate. Saito wants Fischer to break up his father’s corporate empire, and thus leave the way clear for his own energy conglomerate to take the top deals.

Cobb insists it’s possible, and his payment for completing the task will be freedom to return to the United States where he can be reunited with his children. If he returns, he faces life imprisonment, but to tell you why would spoil a good story.

Cobb and his team of dream-walkers prepare for the dangerous task, which becomes more dangerous as unforeseen complications appear. Cobb cannot control his projections, most of which include his deceased wife, Mal (Marion Cotillard), who appears in the dreams and sabotages his operations. As the team enter Fischer’s mind, there’s a chance they’ll never come back.

The beauty of writing about dreams is you can do almost anything with them. ‘Inception’ had no shortfalls here, and, thankfully, resisted overdoing it. Each of the dream sequences were original, visually dynamic (deserving of their Oscar for Best Visual Effects). They could have been genuine subconscious meanders. The columns supporting a bridge, replicated in mirrors which are then shattered to reveal their real incarnation, is a stroke of genius. We’re also treated to Escher’s famous paradoxical staircase, a useful tool for outwitting enemies conjured by the dreamer’s subconscious to combat intruders.

The originality of the screenplay will blow you away. But start watching it knowing that you need to concentrate. If you do, there’s a good chance you’ll guess the significance of the enigmatic opening (look out for a throwaway comment half way through). Christopher Nolan likes his audience to work things out for themselves. There’s no doubt this film was cheated out of Best Original Screenplay. Maybe a bit of inception on the Academy members would have turned their luck around. VP

11 thoughts on “Another Movie Catch-Up: Inception”