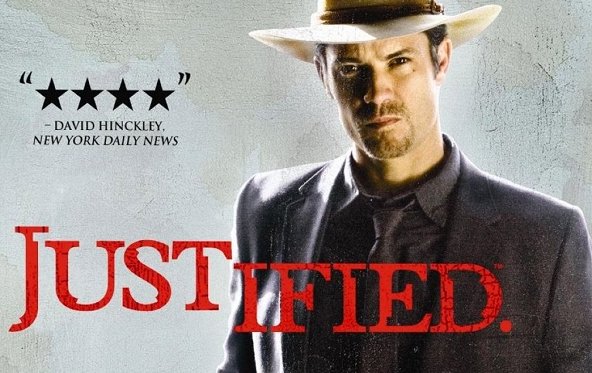 Somewhere between the American whimsy of Castle and The Mentalist, between the formulaic ubiquity of the CSI‘s, between the Heart of Darkness despair of Law and Order (/Criminal Intent), there is a hard-bitten Western-Noir cop show where a US Marshall fights the good fight with a gun, a badge and a white stetson.

Somehow, FX has turned out a latter-day Western, Gunsmoke crossed with Dirty Harry, which is hip, smart, set uniquely in back-woods Kentucky and has an immaculate pedigree in the source material by Elmore Leonard. The mesmerising lead, the unlikely-named Timothy Olyphant, treads a fine line between James Arness and Clint Eastwood as Deputy U.S. Marshal Raylan Givens, taking on a succession of ever more ferocious criminals, with the equally charismatic Walton Goggins (as Boyd Crowder) his nemesis.

Givens is the local boy made good, returning home in near disgrace after some Dirty Harry action in Miami, to a present day Kentucky that plays more like the old Wild West. If you like your Westerns without the horse opera, there’s a new sheriff in town…

Justified is now into Season Three, another run of thirteen episodes in which top writers, including a resident Elmore Leonard himself, continue to up the double-crosses and the body count in compelling, dramatic scripts. This is the show that proves there’s life in the American cop-show outside the big city urban jungle.

After Season Two’s final reckoning with the Bennett clan, Givens is back on duty having been shot, Boyd is back in jail, deliberately, in pursuit of the Bennett legacy, and there’s a new bad guy in town from the darkly-whispered Dixie Mafia. Things in Harlan County are about to get a whole lot worse.

Olyphant and Goggins stay on sparkling form, together and individually, supported by an ensemble cast of back-woods villains who are both shocking in their immorality and highly entertaining in their stupidity. Worthy successors to the hillbillies in Deliverance, they’re in a class even Sons of Anarchy can only dream of.

The season opener, “The Gunfighter” resolves with a stone-cold hit man getting the drop on the recuperating Givens for a classic Western show-down. I won’t spoil it, but it sets the tone for the season.

If you’re tired of the other me-too cop-shows, seek out Justified. The short seasons give you quality in manageable doses and leave you wanting more. RC

Robin Catling gained degrees in both arts and technology which led to a diverse portfolio of employment. A freelance systems analyst, project manager and business change manager for the likes of American Express, British Airways and IBM, he moved on to web design, journalism and technical authoring. He has also worked in film and television, both behind and in front of the camera, including productions by Steven Spielberg, Martin Scorcese, Ron Howard and Ridley Scott. A qualified three-weapon coach, he runs West Devon Swords teaching sports fencing to all age groups, and in recent years qualified with the British Federation of Historical Swordplay to teach medieval and renaissance combat in the Historical Western Martial Arts.
View all posts by Robin Catling »
« News
Opinion: The inadmissible assumptions (re-post) »