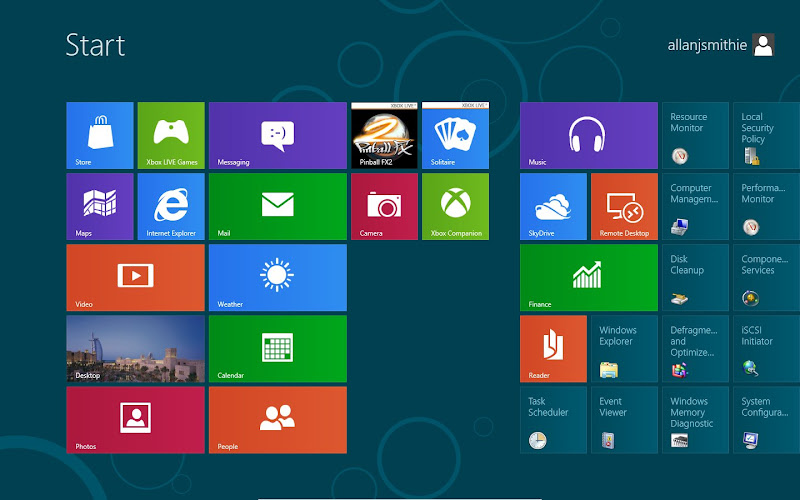 Guest Additions work up to version 4.1.8. After that, you take pot luck depending on what virtualised hardware you’re running. Users of 4.1.10, 4.1.12 and 4.1.14 are reporting all kinds of grief with the VirtualBox graphics drivers; mostly black screens. In my case, I get a lovely multi-coloured Metro start screen. It has nice blocks of solid colour, sans icons or text. Not exactly Live Tiles, just completely dead ones.

Trying to install any of the later version Guest Additions in Safe mode isn’t helping; as soon as it loads up the graphics driver in normal running, we’re back to block-rendering which isn’t the peak of usability.

Once you hit this point you pretty much hit a wall in terms of being able to uninstall the offending Guest Additions version. Hitting shift and F8 during boot-up is a hit an miss affair that I can’t get to work. You might want to try something suggested over on Addictive Tips, depending on how much time you want to spend on the problem.

Having tried various fixes from around the Inter-web, I’ve called time on it. I’ve restored a Windows 8 image running Guest Additions 4.1.8 under VirtualBox 4.1.14, which combination appears to work for now. I get decent full-screen graphics, albeit a bit buggy and laggy, but it works in full resolution.

Windows 8 Consumer Preview is still a Beta release and as such should be treated with caution. The best I can advise is to have backup images of any Windows 8 virtual machines you have (restore points and VirtualBox snapshots being not wholly reliable in the muddy world of driver stacks), so that you can roll back with confidence to any known good configuration. AJS

Robin Catling gained degrees in both arts and technology which led to a diverse portfolio of employment. A freelance systems analyst, project manager and business change manager for the likes of American Express, British Airways and IBM, he moved on to web design, journalism and technical authoring. He has also worked in film and television, both behind and in front of the camera, including productions by Steven Spielberg, Martin Scorcese, Ron Howard and Ridley Scott. A qualified three-weapon coach, he runs West Devon Swords teaching sports fencing to all age groups, and in recent years qualified with the British Federation of Historical Swordplay to teach medieval and renaissance combat in the Historical Western Martial Arts.
View all posts by Robin Catling »
« Humour: Hard Labour
Review: Tinker, Tailor, Soldier, Spy (2011) »