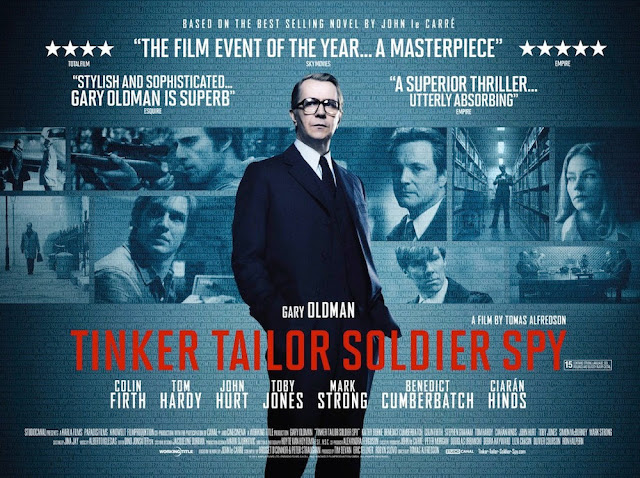 Gary Oldman breathes new life into John le Carré’s retired spy-hunter, the melancholy and betrayed George Smiley, in a tense thriller reminiscent of the best espionage tales all the way back to the Spy Who Came in from the Cold. Smiley is brought out of retirement to root out a Soviet mole at the top table of the British Secret Service…

This is far away from Bond glamour, no fast cars and jets; mostly middle-aged men making dirty compromises to keep even dirtier secrets. And yet this is one of the most effective thrillers produced in years, laden with menace and the threat of humiliation and sudden death.

Le Carré executive-produces this latest adaptation of his complex source espionage novel, superbly compressed into a screenplay by Peter Straughan and the late Bridget O’Connor. This theatre of paranoia is darkly directed by Thomas Alfredson (Let the Right One In). London in 1973, mid-Cold War, is suitably chilly, looking more like Moscow with it’s 70’s urban decay and dim concrete canyons.

Under Alfredson, the 70’s are fractured  through the lens of the past. This is a Britain that looks like Soviet Russia, but we’re witnessing the changing of the guard at the Circus (MI6 headquarters in Whitehall), a labyrinthine, soulless and shabby place of locks, gates, the constant movement of secret files and tapped telephones. This is the dull business of Cold War espionage, subtle maneuvers, mind games, false strategies and double-blinds but the stakes could not be higher with the threat of World War III the result of any mis-step.

Smiley embodies the disenchantment and sense of betrayal in both work and private life; forcibly retired along with Control (John Hurt), left to sit in an empty house – empty since Smiley’s wife has left him – again. Occasionally channeling a little of the Alec Guiness Smiley, Oldman articulates in looks and body language a lifetime of broken promises. Unlike Guiness, Oldman presents a ruthless Smiley still vital and capable of action, stepping onto the front-line for the endgame he has plotted against his unseen adversary, Soviet spy-master Karla.

Even as he hunts the elusive mole amongst the ambitious men who would be king in a declining, post Philby and McClean world – Alleline (Toby Jones), Haydon (Colin Firth), Bland (Ciarán Hinds), Estherhase (David Dencik) – we realise Smiley himself is under suspicion. It’s a quality cast led by Oldman and Hurt with star turns from the rest. Mark Strong’s exiled spy back from the dead has bitterness and pathos. Among the young guns, Tom Hardy is luminous as a suspected defector, a returning field agent out to do thhe right thing in a very wrong business; Benedict Cumberbatch holds the screen as Smiley’s suave young protege realising he is drowning out of his depth and that home turf may be the most dangerous of all.

It doesn’t matter that the sharp-witted viewer can spot the mole before Smiley, the thrill is in the journey Alfredson lays on to the conclusion; the narrative unusually cut-up and expertly told using a film-maker’s full palette of techniques. No lazy short-cuts or clichés here, this is a Cold War where only three shots are fired and the dread and the terror are real from the opening to the end. RC

Robin Catling gained degrees in both arts and technology which led to a diverse portfolio of employment. A freelance systems analyst, project manager and business change manager for the likes of American Express, British Airways and IBM, he moved on to web design, journalism and technical authoring. He has also worked in film and television, both behind and in front of the camera, including productions by Steven Spielberg, Martin Scorcese, Ron Howard and Ridley Scott. A qualified three-weapon coach, he runs West Devon Swords teaching sports fencing to all age groups, and in recent years qualified with the British Federation of Historical Swordplay to teach medieval and renaissance combat in the Historical Western Martial Arts.
View all posts by Robin Catling »
« How-to: Run Windows 8 and VirtualBox Guest Additions
Review: Horizon – Out of Control? BBC2 »