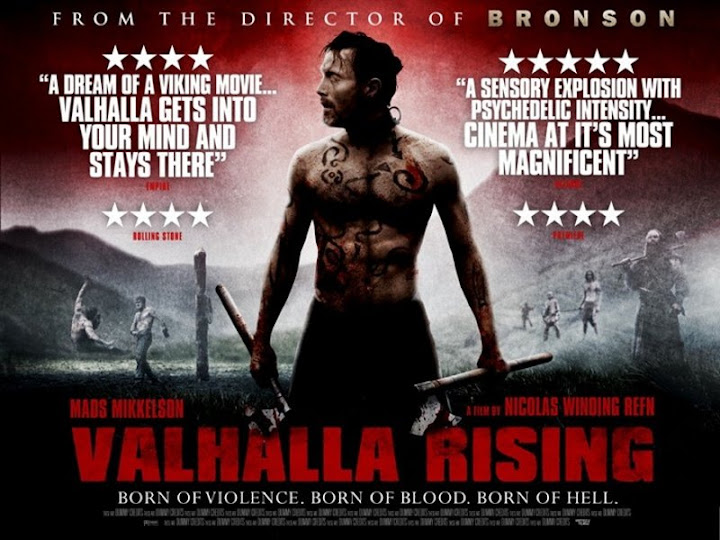 Mads Mikkelson is One-eye; prisoner since killing a chief’s son and condemned to remain a caged and shackled animal. The only person with whom he has any relationship is the young boy who brings him food and water. Between visceral bare knuckle fights to the death, he is traded between chiefs and escapes with yet more violence.

Discovering Christianity is come, One-Eye and the boy find a Christian sect putting the pagans to the sword. They invite One-Eye onto their crusade to the Holy Land. The debate on God, morality, and righteousness runs through the entire film…

This spectacularly inept and superstitious band of Christian Vikings are becalmed in fog, to arrive not in the Holy Land but the New World of America (which you might recognise as Shetland). Picked off by the Native tribe, turning on each other and on One-Eye (a fatal mistake), the Christians seal their doom.

Do not mistake this movie for a standard action-adventure. For long periods all you get are characters staring mournfully into huge, bleak, empty landscapes. It starts in the land of the pagan Vikings, although we’re clearly in the Scottish highlands and the Vikings are all played by Scots actors – with the exception of Mads Mikkelson (King Arthur, Casino Royale) the only Scandinavian actor in the piece and he doesn’t speak a word of dialogue.

Refn calls this his metaphysical, Viking, sci-fi, acid-trip; Vikings journeying into Outer Space, or, as it is set, the unknown brutality of the New World – the second half reminded me of Black Robe. It is a Viking, samurai, gun-slinger art-house movie, in which you can see the influences of Leone, Tarkovsky, Kurasawa, Kubrick, Malick and Herzog – shades of Aguire, Wrath of God. Set in rain, wind, mud and wilderness, it’s unremittingly bleak even to the final act of selflessness.

Valhalla Rising doesn’t really work; too arty for an adventure movie, too violent for an arthouse movie, with too many nods to other movies to stand alone as an original piece. Mikkelson is charismatic as the brutalised berserker One-Eye, and the Scots, including the boy actor Maarten Stevenson, are perfectly cast; but the 88 minutes running time feels like a lifetime. RC

Robin Catling gained degrees in both arts and technology which led to a diverse portfolio of employment. A freelance systems analyst, project manager and business change manager for the likes of American Express, British Airways and IBM, he moved on to web design, journalism and technical authoring. He has also worked in film and television, both behind and in front of the camera, including productions by Steven Spielberg, Martin Scorcese, Ron Howard and Ridley Scott. A qualified three-weapon coach, he runs West Devon Swords teaching sports fencing to all age groups, and in recent years qualified with the British Federation of Historical Swordplay to teach medieval and renaissance combat in the Historical Western Martial Arts.
View all posts by Robin Catling »
« How-to: Freecom DVB-T Resurrected Again Pt1
New Site: Catling on Film »