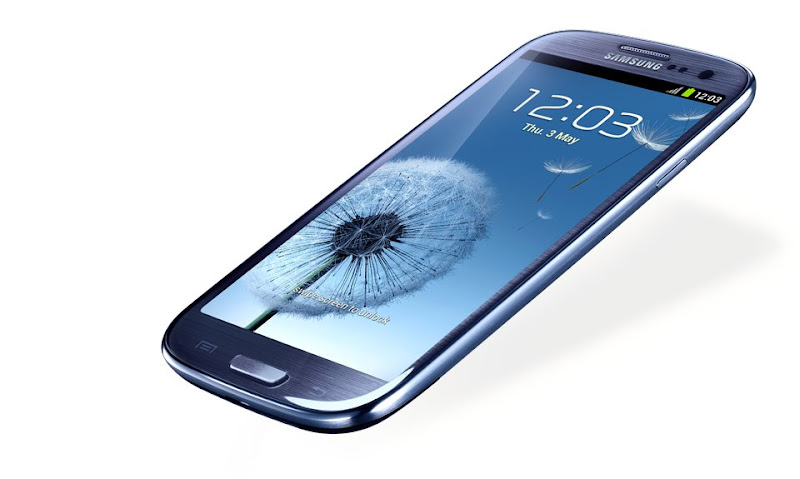 Don’t you love airports. All human life is there, along with every variety of mobile phone on the planet. Which is how I got my hands on a Samsung Galaxy S3 belonging to a German-American called Jeff who owns one.

The first thing that strikes you is the slab design of the case. It’s a large plastic lump with a very big screen and one slightly ugly rectangular button. Only when I held it did I realise its a big thing to fit in small pockets, you need the rounded corners. I’m not totally keen on the design, not only is it a bit bland, I had hoped that Samsung would have built their premium model with a better finish. The plastic feeling of the Galaxy S3 won’t appeal to everyone although it feels very lightweight (despite weighing in at 133g).

I’m sure there’s a comedy routine in the trend for smaller gadgets except phones that keep on getting bigger and bigger. Remember when the Xperia Arc’s 4.2inch screen was considered large? Soon we’ll be back to the 80’s brick phones. Ah, nostalgia… But the S3 is smaller than the Galaxy Note so you don’t look like one of The Borrowers when using it…

The second thing that hits you is that screen. The 4.8 inch super AMOLED screen is an HD screen in a minimal bezel. The Galaxy S3’s big screen is NOT a Super Amoled+ screen; without the + it uses pentile technology like the Galaxy Note and the Galaxy Nexus, but is still very impresive in reading books, watching videos and typing longer text. It makes reading texts very easy on the eyes. You can read books easily for long periods. The words on the screen look pin sharp as do pictures and Flash video.

The Samsung Touchwiz overlay for the Galaxy S3 is marketed with much ‘inspired by nature’ hyperbole and themed with floating dandelion pods which we’ll ignore. There’s still a big lawsuit underway about unlocking screens with Apple, so Samsung have toned things down a bit. When unlocking, a little water ripple under the finger is accompanied by a little water drop sound; then you’re into the re-worked Samsung Touchwiz interface which is much easier and smoother when swiping around. There are lots of widgets to play with, but there is less clutter on the larger screen.

The standard dock at the bottom of the screen now holds five favourite items, so you can fit Internet, mail, phone and messaging as well as the app menu.

Gesture support is also getting better – you can take screenshots from the phone device by simply waving your hand across the camera.

This is Android 4.0.4 under the hood, with all the latest Ice Cream Sandwich extensions; not entirely reliable yet, as turning desktop mode on and off to see different versions of the web doesn’t always work every time.

The on-screen keyboard is nothing special, although the the larger screen with the higher pixel densitiy gives better accuracy than almost any other. However, the auto-correct still drives me nuts, meaning some customisation will be needed.

The Galaxy S3 has a number of pre-installed apps, mostly Hubs, especially the Video Hub, and a stack of Samsung branded utilities like S Suggests and S Memo. Apps like the Reader Hub for magazines and newspapers, and the Social Hub to unify social networking accounts and email had to be downloaded as an optional install [UPDATE: I don’t think Jeff got them as ‘official’ apps, they’re still off the S3 unboxed as at end of May]. The Music Hub is Samsung’s music store; sadly no streaming and no cheaper than on the Amazon MP3 store. The Gamer Hub has got some top titles that will stretch the quad-core’s graphics processor and HD screen.

The third thing you notice is how smooth and fast everything is, thanks to the 1.4GHz quad-core Exynos chip with 1GB of RAM. There’s now more processing power in quad-core phones than NASA had to send man to the moon.

Camera
Samsung has backed off the unnecessary Mega-Pixel race of phone cameras, opting for 1.9MP on the front, which is good enough to video-conference or record in 720p. The main camera is an 8 megapixel 1080p camera on the back. It’s a completely new custom built sensor, not the same camera sensor as the Galaxy S2. It has a wide aperture and great back-lighting, a lag-free shutter and lag-free continuous shooting and stacks of features: High Dynamic Range (HDR), panorama, Smile Shot and something called ‘Beauty’ Mode. It didn’t work on me.

In burst mode up to 20 shots can be captured at 3 frames per seconds at a time. The ‘Best Shot’ feature isn’t new but this version can detect no smile or closed eyes in a picture to chose the best out of 20 photos. It will recognize the people in those photos based on existing pictures you have linked to them in the contacts list and will automatically tag them. There’s ‘Buddy photo share’ where you can snap a picture and it will be instantly shared to all your friends (do check the privacy settings on this!).

The facial recognition mode allows you to zoom in on any face – a double tap fixes the focus of the photo, although oddly it introduces more digital noise. Post-processing is impressive; the S3 tags faces based on your contacts’ profile pictures. You can also set up specific groups in your phonebook, and when the S3 recognises each person will automatically sort them into the correct album.

S Voice
The background noise was altogether too loud to use S Voice effectively so Siri can’t be conclusively beaten just yet, but S Voice can be invoked without launching the application or tapping a widget, now no matter where you are in the phone OS.

“Hi Galaxy” is still the default wake-up to invoke it from anywhere and it’s contextual, so if your phone is ringing you can pick up with your voice, or you can silence an alarm simply by saying “snooze.” The phone itself needs to be trained to hear your voice for certain features; you have to repeat your wake up call four times so the phone learns the timbre of your voice, and improves the accuracy for this and other common commands. It all seems very sensible to me. Samsung is touting ‘natural language processing’ as a core feature of S Voice, but we’ll see how this works out long term. I can see this soaking up a lot of the quad-core processor power.

S Beam
Amongst the Blootooth, Wi-Fi and NFC, S Beam is Samsung’s turbocharged version of Android Beam from Google, allowing you to connect phones using the NFC capability; but then it uses Wi-Fi direct to transfer content. That’s great if you have a Sumsung-owning buddy, you only have to hold the phones together, wait for the beep, tap the screen and you can send any content you like at 300Mbps. However, S-Beam or Wi-Fi direct is so limited that it will be pointless for most people owning the device. The underlying DLNA technology is limited to one or two smartphones out there, and OEMs are not adding it to other devices like laptops; even late-model laptops from Samsung, manufactured long after WiFi Direct was announced, do not have it

Media
Samasung aims to have the best media on the move. The video player has so many codecs supported you’ll struggle to find media formats it won’t play – but that’s not a guarantee. Playback is good with that screen; quality contrast ratios and decent colour reproduction. The player navigation is easy and accurate, slipping up and down the timeline to move through a video, you really can’t fault it.

Streaming is more prominent than before, if you have wireless streaming already set up in your house, that’s easy. Other features include AllShare Cast to allow streaming to and from other devices. You can send content from the phone to a TV and receive from a PC in your home network; you can even do this remotely, as long as the device is turned on.

Storage
If you’re going to use this as your portable media player in hi-def, you need the storage and the S3 impresses here as well; the 64GB model still has room for a 64GB microSD card.

Phone
Oh yes, it works well as a phone. Messaging and calling are now tightly linked; the ‘raise to call’ feature means if you read a text from a buddy and want to call them, all you need to do is put the phone to your ear while their missive is on the screen.

Verdict
In the last reported quarter Samsung sold more than 44 million smartphones to make it the best selling manufacturer by volume. Not even Apple can challenge Samsung in the numbers game, so you know they’re doing something right.

The S3 seems very impressive. The concerns are the demands made by the quad core processor and the big 1280×720 display and whether the battery can deliver. Samsung has managed to keep the thickness of the Galaxy S3 pretty comparable to the Galaxy S2 but upgraded the battery from 1650mAh to 2100mAh. It promises larger capacity and therefore longer life, but it seems it all depends on your usage pattern and the signal strength of phone and mobile networks around you. Samsung promises better power management, but in reality this one was chewing through its battery quite badly.

The S3 is the ‘official’ phone of the London Olympics and is out in Europe before the US and other markets. As the latest flagship, quad-core phone it is, of course, expensive, even on contract. I have two reservations; how many people will regard it’s looks and software worthy of the premium price? And how many will wait for the iPhone5? AJS