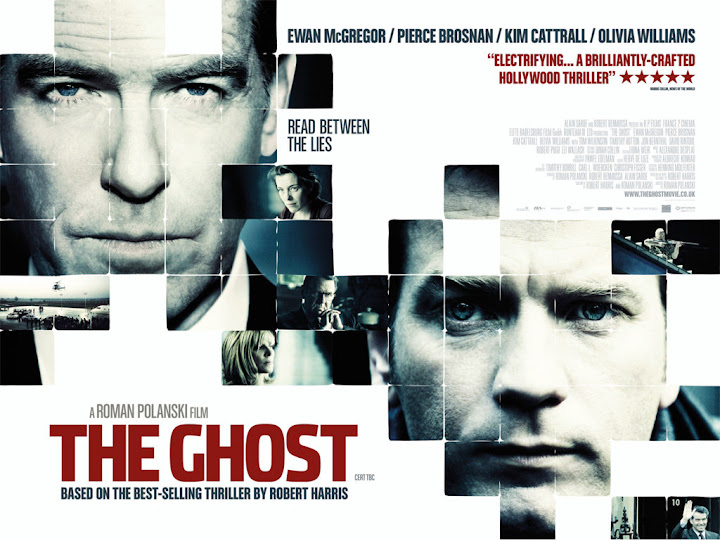 Like many a thriller, The Ghost (or The Ghost Writer) begins well – an opening gloomy mystery, well photographed, opening up into some quick character sketches with some snappy dialogue. Ewan McGregor’s hack writer is hired to ghost the memoirs of a disgraced former Prime Minister (Brosnan), after the previous ghost’s untimely suspicious death. With a lauded source novel by Robert Harris (Enigma) and Polanski channelling Hitchcock in the director’s chair, this should have been another Frantic, or Chinatown.

But no. Like many a who-dunnit where you guess who-dunnit just from the casting in the opening credits, The Ghost quickly unravels into one of those late-night ITV3 thrillers – usually starring Shannon Tweed and, post-Remington Steel but pre-Bond, your man Brosnan himself. Playing by the numbers, disappearing into more daft plot holes and superficial conversations between cardboard cut-out characters, The Ghost finishes on a predictable series of let-downs, including the most contrived and cliched coded-message since, well, a late-night TV mystery with Shannon Tweed and Pierce Brosnan.

McGregor the movie-star seems to have hit on a style of acting that lacks any commitment, unlike Brosnan who, post-Bond, has rediscovered acting, but in all the wrong vehicles. As a complex, but empty former Prime Minister in the Blair mould, Brosnan flashes some acting pyrotechnics to make the most of the material with the thankless job of looking like the prime suspect. Olivia Williams shines while trying not to look a suspect. Kim Catrall has you thinking “isn’t it that bird from Sex and the City doing a dodgy mid-Atlantic accent and isn’t she supposed to be British”, while the usually reliable Tom Wilkinson’s cameo as the corrupt elder statesman has you thinking the same as he tries to play American again and somehow fails. Octogenarian Eli Wallach gets the only sparkling cameo in the whole thing and feels like the only real person here.

Not having read Robert Harris’ The Ghost source novel, I can’t comment on the mechanics of the plot in prose; the plot we get on-screen here, allegedly by Harris himself, is a woeful Janet-and-John rendering for the criminally stupid. Each reveal is carefully sign-posted in so far in advance you wonder how it takes McGregor’s criminally stupid amateur sleuth the whole 128 minutes to put it together (which, by the way, feels about twenty minutes too long). So much for the people hiring him for his intelligence. Like Brosnan’s ex-PM, I can’t even remember his character’s name.

Polanski delivers a handsome, chilly film that should have worked better; an antidote to the kinetic frenzy of Bond, Bourne and the like, full of secrets and conspiracy theories. Instead you actually want something more exciting than McGregor pedalling about in the rain on a bike a la Miss Marple. The sat-nav in his eventually borrowed car leads him literally right to the plot break-through and yet he continues to look confused and bewildered. His most energetic action is jumping over a fence; although for the contrived bedroom scene we get the obligatory flash of McGregor’s backside, otherwise it’s all very coy and not very Polanski. I won’t spoil the ending, a Hitchcock-homage that happens off-camera, partly because by then I stopped caring and I suspect you’ll be asleep long before then. RC

4 thoughts on “Movie-Catch-Up: The Ghost”