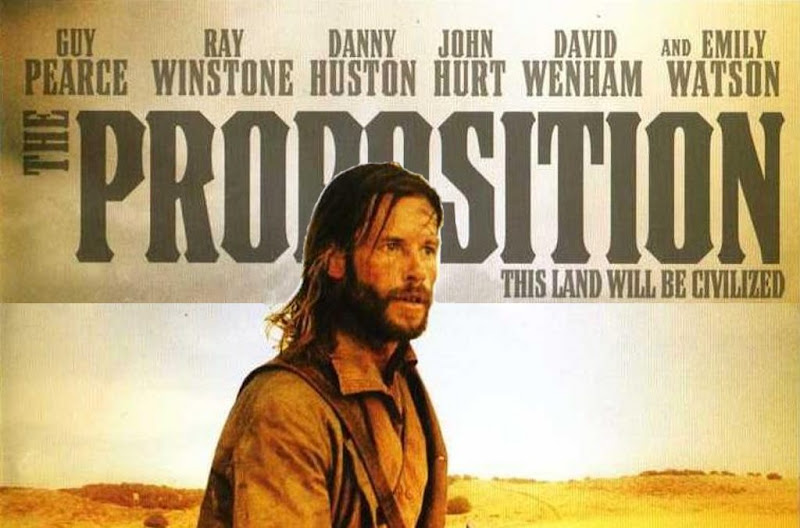 “This land will be civilised.”

The local constable, Captain Stanley (Ray Winstone), captures Charlie Burns (Guy Pearce) and younger brother Mikey, wanted for rape and murder of a settler family. Captain Stanley presents Charlie with an ultimatum; go out into the Ranges, beyond the reach of the law, to capture or kill older brother Arthur, or else Mikey will be hanged in nine days, on Christmas day.

While Charlie sets off across a harsh, hostile landscape to find Arthur (Danny Houston) and his gang, holed up in hostile territory controlled by rebel natives, Stanley has to contend with mutiny among his men, a vengeful, self-righteous mayor (David Wenham) and keep safe his well-bred wife Martha (Emily Watson).

The spirits of Sergio Leone and Sam Peckinpah fill this lyrical, beautiful and sad tale that is also shocking, brutal, filthy and savagely violent. This is an 1880’s Western. In Australia.

The Proposition is filled with mesmerising performances. Guy Pearce (Memento) is as closed and unreadable as any Western anti-hero, with as little dialogue as Eastwood’s Man With No Name; his only choice to save one brother by killing the other. He is the man against the land, against authority. But as we discover, Charlie is sickened by the crimes Arthur and the gang have committed.

He is perhaps the only one with a moral compass left intact, something that has broken in Ray Winstone’s British lawman sent to Australia to bring order to the colonies. Stanley keeps repeated his mission statement – “this land will be civilised,” but you can feel and hear his despair and sense of failure, up against Old Testament justice and the stark injustice of the Empire. “Australia. What fresh hell is this?” Stanley, who thought he was a hard man, finds he is not hard enough for this job, is even too liberal and earns only the contempt of the mayor, the town and his men.

We don’t know how many of the locals were exiled under sentence of transportation by the British Empire, but this is  the height of the policy; these are rough, violent men and its’ no coincidence that the Burns clan and Arthur’s psychopathic singing sidekick are all down-trodden Irish. Prejudice and hate extends down to the Aboriginals, routinely abused by settlers, police and Arthur’s gang.

The Proposition is written by musician and novelist Nick Cave; he previously collaborated with director John Hillcoat on the film Ghosts… of the Civil Dead. The script is full of Cave’s dark sensibility where helpless characters hurtle over the moral precipice. The dialogue is as stark and apocalyptic as the arid, burning landscape. In a blistering cameo, John Hurt delivers a flamboyant bounty-hunter, Jellon Lamb, another frontier Englishman; “I came to this beleaguered land and the God in me evaporated.”

If Captain Stanley and Charlie are adrift in the moral vacuum, then Emily Watson and Danny Houston are the moral anchors. Watson’s Martha is the good wife watching her husband break down under the responsibility, her moral centre undermined on discovering just what crimes are committed by the law breakers and its defenders. It is for her that Stanley wants to civilise the untamed land and untamed men.

Danny Houston’s Arthur is a violent and dangerous sociopath, an educated man with a desert cave filled with books. But he is a rebel, a nihilist, an outlaw filled with a cold rage against the world. The tense scenes between the unsuspecting but murderous Arthur and his brother Charlie are the highlights of the movie.

Be warned, this is not for the faint hearted. There is bloody violence form the start that builds and escalated through to an horrific climax, where you know things can only end badly. And yet – this is powerful, unmissable stuff. RC

4 thoughts on “Movie Catch-up: The Proposition”