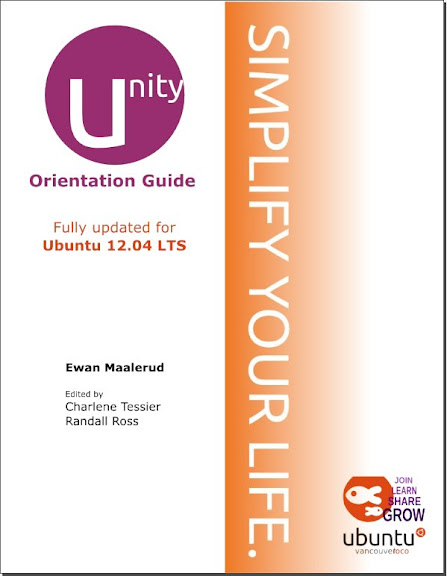 With the release of Ubuntu Linux 12.04 LTS, the Ubuntu Vancouver Local Community (UVLC) has updated its guide to the Unity desktop. The fully revised “Unity Orientation Guide,” formerly “Simplify Your Life with Ubuntu Unity”, is available now.

No matter what your familiarity is with Ubuntu, please share this guide with your neighbours, friends, and family members, especially those on the other side of the chasm!

The “Unity Orientation Guide” (for Ubuntu 12.04 LTS) can be found on the simple web address:
http://frenchfortunecookie.files.wordpress.com/2012/05/unity-5-10-0-final-pdf.pdf

Ubuntu 12.04 LTS Simplify Your Life, is a lighter and much faster read than the original. It’s geared towards those learning and experiencing the Ubuntu Unity interface for the first time. Its’ focus is getting you oriented quickly and thus allowing you to get on with your day to day computer tasks.

It does what it says on the cover for the most part, with one odd decision to put the explanation of the Unity HUD (Head Up Display) at the back, when it really ought to go near the front just after the description of the Unity Dash. The HUD is a much trumpeted feature of 12.04, losing it in the back of the guide makes no sense. Otherwise, we heartily recommend it. RC

Robin Catling gained degrees in both arts and technology which led to a diverse portfolio of employment. A freelance systems analyst, project manager and business change manager for the likes of American Express, British Airways and IBM, he moved on to web design, journalism and technical authoring. He has also worked in film and television, both behind and in front of the camera, including productions by Steven Spielberg, Martin Scorcese, Ron Howard and Ridley Scott. A qualified three-weapon coach, he runs West Devon Swords teaching sports fencing to all age groups, and in recent years qualified with the British Federation of Historical Swordplay to teach medieval and renaissance combat in the Historical Western Martial Arts.
View all posts by Robin Catling »
« How-to: Begin on Social Media – YouTube
How-to: Connect Android Samsung Galaxy S2 USB Storage »

4 thoughts on “Simplify Your Life: the “Unity Orientation Guide” Revised”