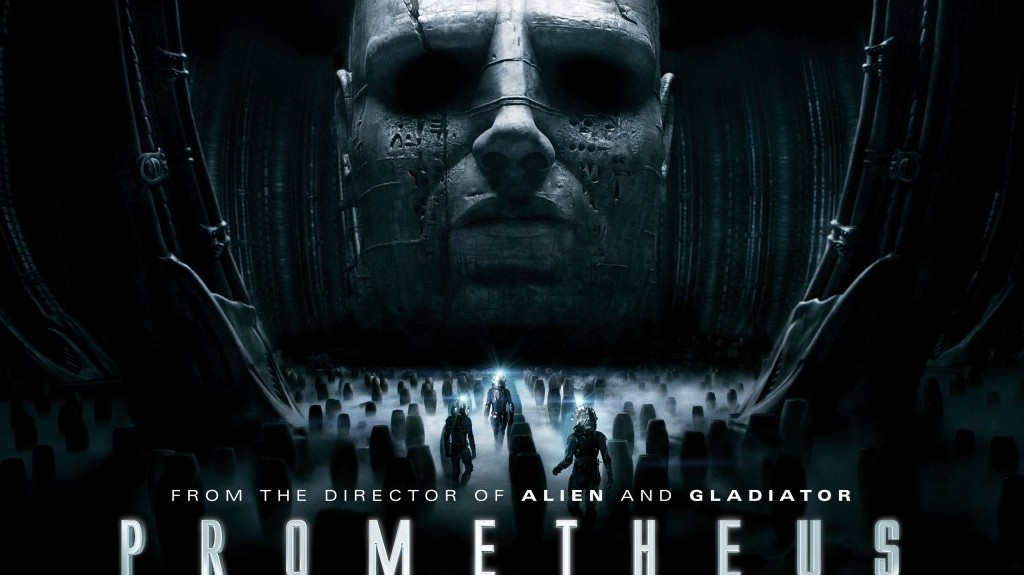 Ridley Scott is back on form in a visually impressive return to his Alien universe.

Noomi Rapace makes a worthy pint-sized successor to Sigourney Weaver’s Ripley as Dr Elizabeth Shaw, scientist and Believer played with absolute heart and conviction. Idris Elba plays it for real and Tharlize Theron is a glacial corporate executive. Everyone has to compete with immacualate production design and special effects.

We’re in the Alien universe, in dark, dripping tunnels, with a rag-tag crew that you know will be brutally ambushed by unknown nasties until only one survivor will be left to tackle the alien horrors…

It’s the funny thing about science fiction. Here, watching The Sky at Night and Prof Cox’s Wonders of the Solar System, I can’t help thinking that the future we want is always further away than we think, while the future we didn’t expect is the one we wake up in.

If science fiction is a mirror of the time in which it’s made, and the concerns of its makers, then the older, wiser Ridley Scott has moved on from simply creating horrific alternate forms of life and is now underpinning his tale with clanking musings on God, creation and mortality; assuming the Alien audience cares for the search for mankind’s soul.

Opening: a big, pale, creepy humanoid alien with an Easter Island head, seeds his DNA into a watery planet – ours? Cut to our near future, Shaw and hubby, the reckless bundle of energy Dr Holdaway (Logan Marshall-Green, the guy you get when Tom Hardy isn’t available) are mucking about in plastic windcheaters, digging out Scottish cave paintings; it’s those aliens again. This doesn’t bode well. We’re retreading Eric von Danicken’s Chariots of the Gods, a path well trodden by Stargate, Star Trek, Dr Who and any number of sci-fi series. Only this time we know where to find the gods.

Cut to 2093; Shaw and Holdaway wake up on the inter-stellar ship Prometheus (remember the mythological character who dared challenge the Gods?), along with that rag-tag crew and Fassbender’s sinister android David, who emerges fully formed from Scott’s much later set mythos with more than a hint of 2001’s HAL9000.

Landing on the alien world with a flourish of astonishing CGI, the exploration begins and, this being Scott in his Alien universe, goes quickly and horrifically wrong. So horrific, I wondered that it scraped through the UK 15 certification. The effects and makeup departments have come up with some shocking body horrors, graphic violence, human incineration and a squirm-inducing medical procedure that normally rate 18.

Scott remains a master of suspense sequences and on his day can string together an arresting tale as good as any from Blade Runner to Kingdom of Heaven.

The production design is phenomenal, in every garment, prop and set. The ships, vehicles and spacesuits look like classic Isaac Asimov book covers. The ship interior is not the workaday space truck of Scott’s Nostromo, but a gleaming mix of retro and future, with more than a hint of Kubrick’s 2001 A Space Odessey.

But this being sci-fi and a Ridley Scott script, the thing has more holes than cheese cloth. Interstellar travel by the 2090’s? A fully sentient bio-mechanical android? All those Minority Report holographic computer displays? Okay, we might get that one.

But who in their right mind picked this lot for a crew? And shouldn’t there be some kind of operations manual for unexplored planets? ‘Cos this lot break every rule in the book.

The quiet passages should be welcome relief; however, events come to a juddering halt every time Shaw and David want to reflect on God and creation. Guy Pearce cameo’s in the most inconsistent old age make-up you ever saw – I’m a fan, but his ‘old acting’ begs why they didn’t get just an older actor – Plummer, Hopkins, James Cromwell?

The core issue is expectations. Prometheus can’t live up to Alien, and the formula of the lurker in the dark picking off the crew one by one is diluted by thirty years of overuse and some cynical plotting by Scott himself.

In the end it resolves into a tour-de-force of CGI effects, familiar Alien tropes and you admire the accelerating climax toward – well that would be spoiling. The technical and design achievement is a joy for sci-fi fans, which may not be shared by everyone. At just over two hours, it’s long but doesn’t outstay it’s welcome.

According to Scott this isn’t the Alien prequel per-se; there’s two more movies in the cycle. This could go either way. RC

Robin Catling gained degrees in both arts and technology which led to a diverse portfolio of employment. A freelance systems analyst, project manager and business change manager for the likes of American Express, British Airways and IBM, he moved on to web design, journalism and technical authoring. He has also worked in film and television, both behind and in front of the camera, including productions by Steven Spielberg, Martin Scorcese, Ron Howard and Ridley Scott. A qualified three-weapon coach, he runs West Devon Swords teaching sports fencing to all age groups, and in recent years qualified with the British Federation of Historical Swordplay to teach medieval and renaissance combat in the Historical Western Martial Arts.
View all posts by Robin Catling »
« Opinion: Has the Airport Experience Become Horrible?
Review: Kindle Touch e-reader »