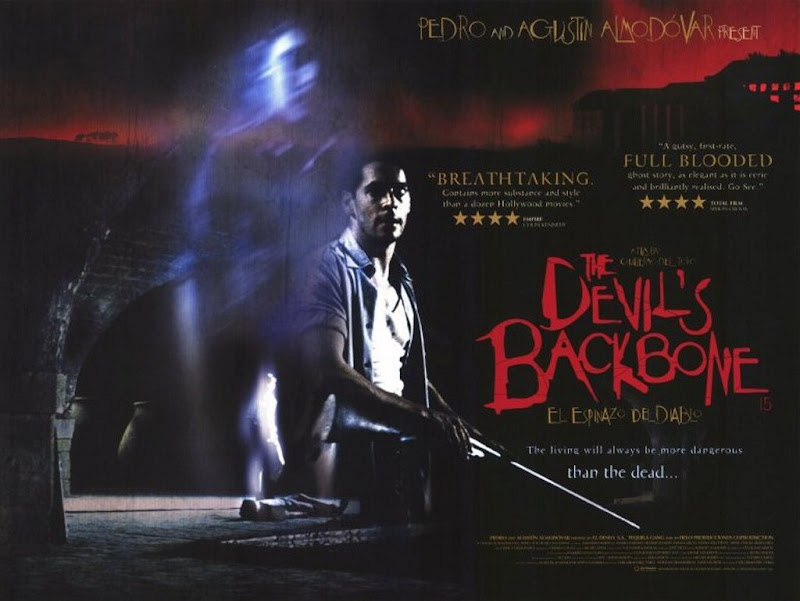 Further exploring the back-catalogue of Guillermo del Toro (Hellboy, Blade II, Mimic), The Devil’s Backbone sits between his first two features, Chronos and Pan’s Labyrinth, a rather brutal tale of ghosts and orphans set against the hard backdrop of the Spanish civil war.

Setting out it’s stall early on, we get on-screen ghosts, physical and psychological horror, suspense, death, musings on mortality and shocks made edgier when they happen to children and old people.

Set in a remote, ram-shackle orphanage run by rebels Dr. Cesares and Carmen (Fedricco Luppi and Maris Paredes), new boy Carlos (Fernando Tielve) has to overcome resident bully Jaime (Inigo Garces) and contend with a truly chilling child ghost. There’s an unexploded 800lb bomb in the yard, the fascist Republican Guard fast approaching and none of them so threatening as former inmate, now grounds-keeper Jocinto (Eduardo Noriega), a man with sinister motives and dubious morals.

del Toro is a master of dark places and atmosphere, the places integral to the plots. The foreboding pool in the dim basement may be telegraphing the story arc, but it’s no less frightening. However it’s the psychological depth he gives the characters that make his movies so rewarding. Here, the adults are full of thwarted longings, regrets and ambitions, complex characters with complex faults. But the children make this movie; vulnerable and tough, swearing, crying, adapting. Becoming hardened, like the boys in the Lord of the Flies, they take on the dark adult world and fight back.

It’s a harsh and unforgiving movie; even after the ghost story concludes, when the surviving boys escape, it is into a harsh, barren landscape, with the fascists awaiting at the end of the road. There are no neat ending with Del Torro. RC

Writer; performer; project manager; sports coach; all-round eccentric.
View all posts by Robin Catling »
« How-to: Find Out if Your Email Address is Compromised
How-to: 10 Ways to Save the World One Internet Connection at a Time (Guest Post) »