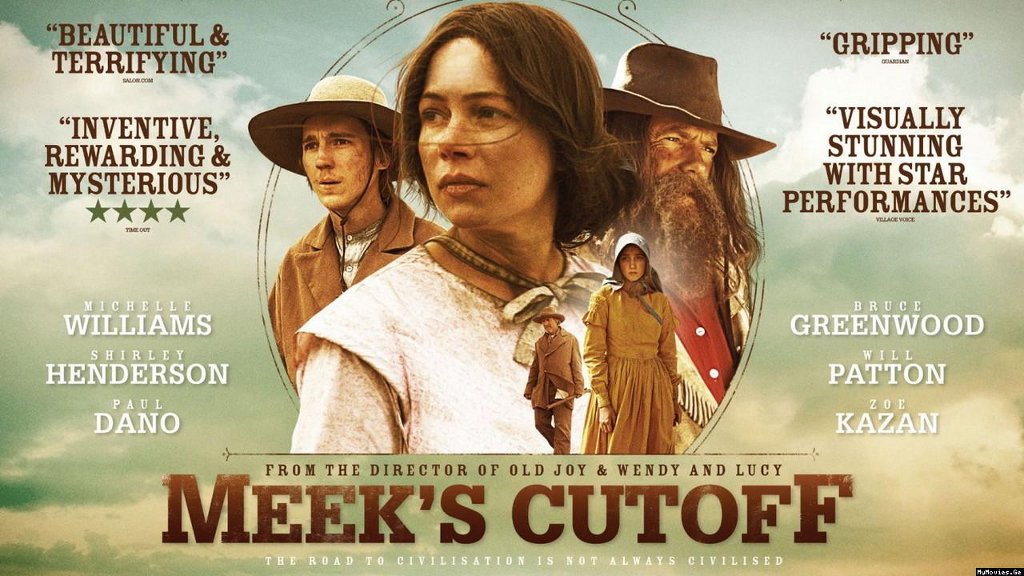 This ‘pre-Western’ directed by Kelly Reichardt is a tale of macro landscapes and micro performances. This is the frontier before Sam Pekinpah, Sergio Leone and John Ford, an elegy not to the passing of the Old West, but the beginning of the New West. There are no gun slingers or railroads and only one Indian. The perils are the divisions between the three families and their guide, and the common dangers of a harsh, uncharted and unforgiving landscape.

Risking ridicule, I’m going to nail this as the women’s Western, as Reichardt makes over the Western wagon train as a portentous, yet largely mundane and domestic travelogue, in which everything except the landscape is understated.

Running to an hour and three quarters, Reichardt labours over Jon Raymonds script that anyone else would have used up in twenty minutes. This is mostly how it runs;

You’ll come away thinking Bibles, blankets, bonnets and a bright yellow songbird in a cage. Most of the time, this is like one of those living history, frontier recreation documentaries, with occasional outbreaks of acting by familiar faces – Will Patton, Michelle Williams (the main draw) and Britain’s own squeaky Shirley Henderson. Greenwood is ebullient as Meek.

As a tribute to extreme bravery – or extreme foolhardiness – to optimism, fatalism, the frontier spirit; Meek’s Cutoff cannot be faulted. As a Heart of Darkness study of motivations, morality and ethical values under threat in extremis, it is a masterfully underplayed portrait of Protestant restraint. As an arthouse triumph, Reichardt, director of photography Christopher Blauvelt and composer Jeff Grace deliver a classic. As a Western, you may want to go elsewhere. Just as things get interesting, Meek’s Cutoff abruptly, well – cuts off. RC

Robin Catling gained degrees in both arts and technology which led to a diverse portfolio of employment. A freelance systems analyst, project manager and business change manager for the likes of American Express, British Airways and IBM, he moved on to web design, journalism and technical authoring. He has also worked in film and television, both behind and in front of the camera, including productions by Steven Spielberg, Martin Scorcese, Ron Howard and Ridley Scott. A qualified three-weapon coach, he runs West Devon Swords teaching sports fencing to all age groups, and in recent years qualified with the British Federation of Historical Swordplay to teach medieval and renaissance combat in the Historical Western Martial Arts.
View all posts by Robin Catling »
« How-to: 10 Ways to Save the World One Internet Connection at a Time (Guest Post)
Review: The Man Who Saves Life Stories BBC Radio4 »